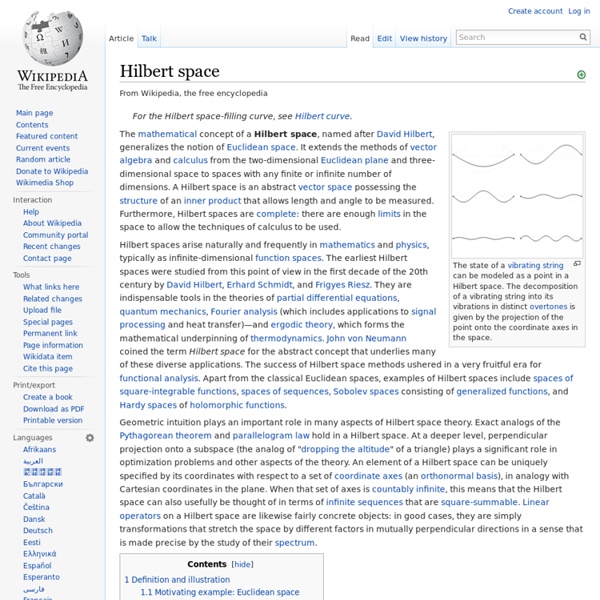 The state of a vibrating string can be modeled as a point in a Hilbert space. The decomposition of a vibrating string into its vibrations in distinct overtones is given by the projection of the point onto the coordinate axes in the space. Hilbert spaces arise naturally and frequently in mathematics and physics, typically as infinite-dimensional function spaces. The earliest Hilbert spaces were studied from this point of view in the first decade of the 20th century by David Hilbert, Erhard Schmidt, and Frigyes Riesz. They are indispensable tools in the theories of partial differential equations, quantum mechanics, Fourier analysis (which includes applications to signal processing and heat transfer)—and ergodic theory, which forms the mathematical underpinning of thermodynamics. John von Neumann coined the term Hilbert space for the abstract concept that underlies many of these diverse applications. Definition and illustration[edit] Motivating example: Euclidean space[edit] Definition[edit] Related:  2. Einstein's dice and schrödinger's cat

Wave function Comparison of classical and quantum harmonic oscillator conceptions for a single spinless particle. The two processes differ greatly. The classical process (A–B) is represented as the motion of a particle along a trajectory. Wavefunctions of the electron of a hydrogen atom at different energies. According to the superposition principle of quantum mechanics, wave functions can be added together and multiplied by complex numbers to form new wave functions and form a Hilbert space. Historical background[edit] In 1905, Einstein postulated the proportionality between the frequency of a photon and its energy , [11] and in 1916 the corresponding relation between photon's momentum and wavelength [12], where is the Planck constant. , now called the De Broglie relation, holds for massive particles, the chief clue being Lorentz invariance,[13] and this can be viewed as the starting point for the modern development of quantum mechanics. Wave functions and wave equations in modern theories[edit] thus and

Five-dimensional space Physics[edit] Much of the early work on five dimensional space was in an attempt to develop a theory that unifies the four fundamental interactions in nature: strong and weak nuclear forces, gravity and electromagnetism. German mathematician Theodor Kaluza and Swedish physicist Oskar Klein independently developed the Kaluza–Klein theory in 1921, which used the fifth dimension to unify gravity with electromagnetic force. To explain why this dimension would not be directly observable, Klein suggested that the fifth dimension would be rolled up into a tiny, compact loop on the order of 10-33 centimeters.[1] Under his reasoning, he envisioned light as a disturbance caused by rippling in the higher dimension just beyond human perception, similar to how fish in a pond can only see shadows of ripples across the surface of the water caused by raindrops.[2] While not detectable, it would indirectly imply a connection between seemingly unrelated forces. Five-dimensional geometry[edit] . .

Oskar Klein Oskar Benjamin Klein (Swedish: [klajn]; 15 September 1894 – 5 February 1977) was a Swedish theoretical physicist.[1] Biography[edit] Klein was born in Danderyd outside Stockholm, son of the chief rabbi of Stockholm, Gottlieb Klein from Humenné in Slovakia and Antonie (Toni) Levy. He became a student of Svante Arrhenius at the Nobel Institute at a young age and was on the way to Jean-Baptiste Perrin in France when World War I broke out and he was drafted into the military. From 1917, he worked a few years with Niels Bohr in the University of Copenhagen and received his doctoral degree at the University College of Stockholm (now Stockholm University) in 1921. Klein is credited for inventing the idea, part of Kaluza–Klein theory, that extra dimensions may be physically real but curled up and very small, an idea essential to string theory / M-theory. The Oskar Klein Memorial Lecture, held annually at the University of Stockholm, has been named after him. References[edit] External links[edit]

BKS theory The Bohr-Kramers-Slater (BKS) theory[1][2][3] was perhaps the final attempt at understanding the interaction of matter and electromagnetic radiation on the basis of the so-called old quantum theory, in which quantum phenomena are treated by imposing quantum restrictions on classically describable behaviour. It was advanced in 1924, and sticks to a classical wave description of the electromagnetic field. It was perhaps more a research program than a full physical theory, the ideas that are developed not being worked out in a quantitative way. [4]:236 One aspect, the idea of modelling atomic behaviour under incident electromagnetic radiation using "virtual oscillators" at the absorption and emission frequencies, rather than the (different) apparent frequencies of the Bohr orbits, significantly led Born, Heisenberg and Kramers to explore mathematics that strongly inspired the subsequent development of matrix mechanics, the first form of modern quantum mechanics. Origins[edit] Jump up ^ N.

Fermi–Dirac statistics In quantum statistics, a branch of physics, Fermi–Dirac statistics describes a distribution of particles in certain systems comprising many identical particles that obey the Pauli exclusion principle. It is named after Enrico Fermi and Paul Dirac, who each discovered it independently, although Enrico Fermi defined the statistics earlier than Paul Dirac.[1][2] History[edit] Before the introduction of Fermi–Dirac statistics in 1926, understanding some aspects of electron behavior was difficult due to seemingly contradictory phenomena. The difficulty encountered by the electronic theory of metals at that time was due to considering that electrons were (according to classical statistics theory) all equivalent. Fermi–Dirac distribution[edit] For a system of identical fermions, the average number of fermions in a single-particle state , is given by the Fermi–Dirac (F–D) distribution,[9] where k is Boltzmann's constant, T is the absolute temperature, is the energy of the single-particle state When .

Pauli exclusion principle Wolfgang Pauli formulated the law stating that no two electrons can have the same set of quantum numbers. In the case of electrons in atoms, it can be stated as follows: it is impossible for two electrons of a poly-electron atom to have the same values of the four quantum numbers: n, the principal quantum number, ℓ, the azimuthal quantum number, mℓ, the magnetic quantum number, and ms, the spin quantum number. For example, if two electrons reside in the same orbital, then their n, ℓ, and mℓ values are the same, therefore their ms must be different, and thus the electrons must have opposite half-integer spin projections of 1/2 and −1/2. Particles with an integer spin, or bosons, are not subject to the Pauli exclusion principle: any number of identical bosons can occupy the same quantum state, as with, for instance, photons produced by a laser or atoms in a Bose–Einstein condensate. Overview[edit] "Half-integer spin" means that the intrinsic angular momentum value of fermions is History[edit]