Patterns of Math - Visual Guide to the Mandelbrot Set 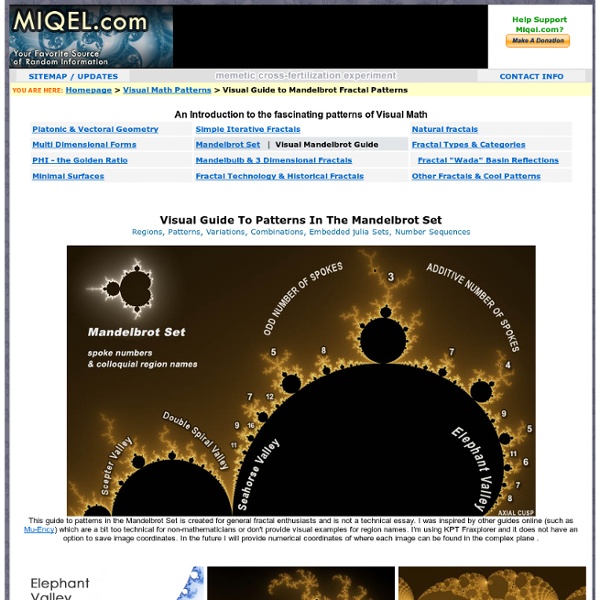 Awesome pictures from around the world | Vivi The Mage Someone sent me these in a chain email, it was horribly formatted. I also do not know who made the comments, or how accurate they are. I take zero credit in the pictures, I just wanted to compile them nicely for all to see. The world’s highest chained carousel, located in Vienna, the height of 117 meters. Thor’s Well – “the gates of the dungeon.” Emerald Lake in the crater of an extinct volcano. Restaurant on a cliff on the east coast of Zanzibar.Depending on the tide the restaurant can be reached both on foot and by boat. Office of Selgas Cano in Madrid Desert with Phacelia (Scorpion Weed). Balloons in Cappadocia, Turkey. Dubai. And this is the view down These trees grow in the forest near Gryfino, Poland. The border between Belgium and the Netherlands in a cafe Twice a year in the Gulf of Mexico rays migrate. In the resort town of Skagen you can watch an amazing natural phenomenon. In the Chinese province of Shandong is a bridge across the Gulf of Jiaozhou. Day and night. Family photo Share!

Gorgeous Sunrise Photography Sunrise is the instant at which the upper edge of the Sun appears above the horizon in the east. Nature is very beautiful, and if caught by a talented photographer in photographs is worth watching and incomparable to any other form of beauty! Just to gather this beautiful phenomenon in pictures, many photographers get up early and find places to catch it. Here i have gathered some of the most beautiful Sunrise Photos from 1x.com, 500px.com , flickr and Deviant Art. Hope you will find it inspiring and take some exceptional pictures your self! Sunrise by Matjaz Cater Divine Light by Christolakis Heal Me by Sun rise V by Daniel Hasselberg The Valley by Roger Arleryd Sun shower by Christolakis Sun Tree by ~Hassan9 Sun Rise by =DennisChunga Golden Gate Bridge – Into The Mist by PatrickSmithPhotography Autumn Sun rise by Gary McParland The fabulous sunrise by Michal Ostrowski Taj Mahal Sun rise Reflectivity by Heather Hartkamp Let There Be Light by [ Rodelicious ] Dawn by Stefan Nielsen sun rays by ~noobs

70 Photos That Will Take Your Breath Away We here at DPShots believe that the easiest way to learn photography is to learn it by example. Every now and then we come up with some amazing photography examples that take your breath away. This post is no different. We have collected some of the most amazing, most awesome and THE most beautiful photography we could ever get our hands on. This post will help a lot of budding photographers to see where they are headed. It shows what is possible with Photography and a bit of creative thinking. From wildlife to magic to a guy sleeping on the back of a buffalo, this post has photographs for all kinds of photographers to take inspiration from. We have collected over 70 majestic photographs that are simply to good to miss. We hope you like this post and endless others that you will get to checkout in future if you are subscribed to our RSS. The Fearless Cat Dael Giraffe says Hi!. Idealists…foolish enough to throw caution to the winds…have advanced mankind and have enriched the world. Kry Love

100 Incredible Open Lectures for Math Geeks While many math geeks out there may have been teased for their love of numbers, it’s math that makes the world go round, defining everything from the economy to how the universe itself operates. You can indulge your love of mathematics in these great lectures and lecture series, which are a great diversion for those diligently working toward traditional or online master’s degree programs in mathematics. Some are meant to review the basics and others will keep you on the cutting edge of what renowned researchers are doing in the field, but all will help you expand your knowledge and spend a few hours enjoying a topic you love. Basic Math These lectures cover some pretty basic mathematical issues that can be a great review or help younger math lovers get a handle on a subject. Such lectures are an excellent resource for students who are completing online degrees in applied mathematics with the intention of entering careers as mathematics educators in middle schools and high schools. Algebra

Moving slabs [This Dynamic Earth, USGS] The layer of the Earth we live on is broken into a dozen or so rigid slabs (called tectonic plates by geologists) that are moving relative to one another. "Historical perspective" Amazing Roads Photos | Beautiful Places - Geniusbeauty.com: Magazine for Beautiful Women Today I decided to add some more beautiful pictures to the “Beautiful Places” category. And this time it’s going to be amazing photos of roads. Yes, I really mean it, because even roads can be beautiful. These are absolutely different roads: roads in forests, asphalt roads, railroads. If the copyright of any wallpaper or stock photo belongs to you, contact me and I’ll remove it!

Mysterious number 6174 March 2006 Anyone can uncover the mystery The number 6174 is a really mysterious number. At first glance, it might not seem so obvious. But as we are about to see, anyone who can subtract can uncover the mystery that makes 6174 so special. Kaprekar's operation In 1949 the mathematician D. It is a simple operation, but Kaprekar discovered it led to a surprising result. When we reach 6174 the operation repeats itself, returning 6174 every time. We reached 6174 again! A very mysterious number... When we started with 2005 the process reached 6174 in seven steps, and for 1789 in three steps. Only 6174? The digits of any four digit number can be arranged into a maximum number by putting the digits in descending order, and a minimum number by putting them in ascending order. 9 ≥ a ≥ b ≥ c ≥ d ≥ 0 and a, b, c, d are not all the same digit, the maximum number is abcd and the minimum is dcba. which gives the relations for those numbers where a>b>c>d. For three digit numbers the same phenomenon occurs. and

Some Bizzare and Odd things around us… Beauty of the nature lies in viewer’s eyes. A photograph is just a way to show or represent that beauty. Here is a bunch of some wonderful pictures which are not only the example of beautiful photography but are also a photograph of some miracles happening in the world. You can also call it the creativity and innovation of photographer’s mind. I think it was at the peak while taking these pictures. Some photographs are just the example of wonder created by God. Some are really very cute and heart touching. I am simply in love with these photographs and I am sure you will too. Gibraltar Airport is one of the most extraordinary airports around the world. Morning Glory – kind of clouds observed in the Gulf of Carpentaria in northern Australia. The river above the river: Magdeburg Water Bridge, Germany. Heavy fog in Sydney, which enveloped the whole city. Skyscraper-Crescent Crescent Moon Tower (Dubai). Photo of storm in Montana, USA, 2010. In northwestern Montana, USA. Favelas of Brazil. Dubai.

Nick's Mathematical Puzzles Welcome to my selection of mathematical puzzles. What's new? See puzzle 160. The math puzzles presented here are selected for the deceptive simplicity of their statement, or the elegance of their solution. They range over geometry, probability, number theory, algebra, calculus, trigonometry, and logic. Explaining how an answer is arrived at is more important than the answer itself. Each puzzle is assigned a level of difficulty of between one and four stars, with four being the most difficult. The source for each problem is given at the bottom of the solution page. I welcome feedback of any kind. Some brief biographical information. Nick Back to top