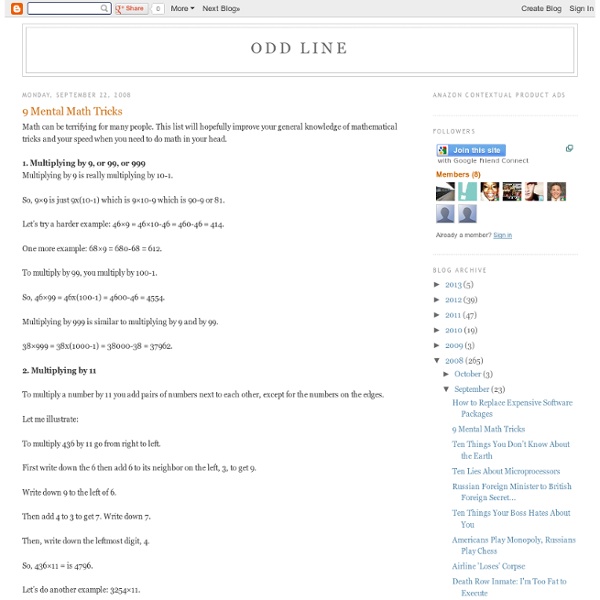 Impress your friends with mental Math tricks » Fun Math Blog See Math tricks on video at the Wild About Math! mathcasts page. Being able to perform arithmetic quickly and mentally can greatly boost your self-esteem, especially if you don't consider yourself to be very good at Math. This article presents nine ideas that will hopefully get you to look at arithmetic as a game, one in which you can see patterns among numbers and pick then apply the right trick to quickly doing the calculation. The tricks in this article all involve multiplication. Don't be discouraged if the tricks seem difficult at first. As you learn and practice the tricks make sure you check your results by doing multiplication the way you're used to, until the tricks start to become second nature. 1. Multiplying by 9 is really multiplying by 10-1.So, 9x9 is just 9x(10-1) which is 9x10-9 which is 90-9 or 81. Let's try a harder example: 46x9 = 46x10-46 = 460-46 = 414. One more example: 68x9 = 680-68 = 612. 2. 3. Multiplying by 5 is just multiplying by 10 and then dividing by 2. 4. 5.

Welcome SCHOPENHAUER'S 38 STRATAGEMS, OR 38 WAYS TO WIN AN ARGUMENT Arthur Schopenhauer (1788-1860), was a brilliant German philosopher. These 38 Stratagems are excerpts from "The Art of Controversy", first translated into English and published in 1896. Carry your opponent's proposition beyond its natural limits; exaggerate it. (abstracted from the book:Numerical Lists You Never Knew or Once Knew and Probably Forget, by: John Boswell and Dan Starer)