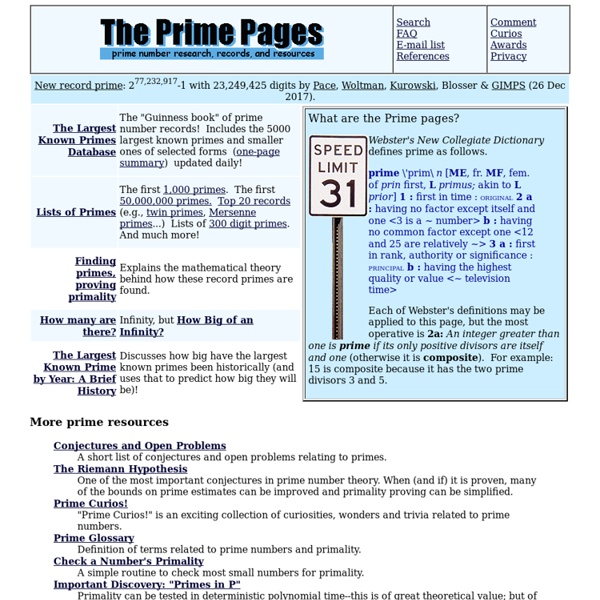 Another Look at Prime Numbers Primes are numeric celebrities: they're used in movies, security codes, puzzles, and are even the subject of forlorn looks from university professors. But mathematicians delight in finding the first 20 billion primes, rather than giving simple examples of why primes are useful and how they relate to what we know. Somebody else can discover the "largest prime" -- today let's share intuitive insights about why primes rock: Primes are building blocks of all numbers. And just like in chemistry, knowing the chemical structure of a material helps understand and predict its properties.Primes have special properties like being difficult to determine (yes, even being difficult can be a positive trait). These properties have applications in cryptography, cycles, and seeing how other numbers multiply together. So what are prime numbers again? A basic tenet of math is that any number can be written as the multiplication of primes. Well, not really. Analogy: Prime Numbers and Chemical Formulas Why? 1.

Zipf, Power-law, Pareto - a ranking tutorial Lada A. Adamic Information Dynamics Lab Information Dynamics Lab, HP Labs Palo Alto, CA 94304 A line appears on a log-log plot. One hears shouts of "Zipf!","power-law!" All three terms are used to describe phenomena where large events are rare, but small ones quite common. Zipf's law usually refers to the 'size' y of an occurrence of an event relative to it's rank r. Pareto was interested in the distribution of income. What is usually called a power law distribution tells us not how many people had an income greater than x, but the number of people whose income is exactly x. Although the literature surrounding both the Zipf and Pareto distributions is vast, there are very few direct connections made between Zipf and Pareto, and when they exist, it is by way of a vague reference [1] or an overly complicated mathematical analysis[2,3]. Figure 1a below shows the distribution of AOL users' visits to various sites on a December day in 1997. Acknowledgements References 1. 2. 3. 4. 5. 6. 7. 8. 9.

» Matematica Open Source 8 math talks to blow your mind Mathematics gets down to work in these talks, breathing life and logic into everyday problems. Prepare for math puzzlers both solved and unsolvable, and even some still waiting for solutions. Ron Eglash: The fractals at the heart of African designs When Ron Eglash first saw an aerial photo of an African village, he couldn’t rest until he knew — were the fractals in the layout of the village a coincidence, or were the forces of mathematics and culture colliding in unexpected ways? Here, he tells of his travels around the continent in search of an answer. How big is infinity? Arthur Benjamin does “Mathemagic” A whole team of calculators is no match for Arthur Benjamin, as he does astounding mental math in the blink of an eye. Scott Rickard: The beautiful math behind the ugliest music What makes a piece of music beautiful? Benoit Mandelbrot: Fractals and the art of roughness The world is based on roughness, explains legendary mathematician Benoit Mandelbrot.

Matematica online - YouMath Euclid's Elements, Introduction Euclid's Elements form one of the most beautiful and influential works of science in the history of humankind. Its beauty lies in its logical development of geometry and other branches of mathematics. It has influenced all branches of science but none so much as mathematics and the exact sciences. I'm creating this version of Euclid's Elements for a couple of reasons. The text of all 13 Books is complete, and all of the figures are illustrated using the Geometry Applet, even those in the last three books on solid geometry that are three-dimensional. This edition of Euclid's Elements uses a Java applet called the Geometry Applet to illustrate the diagrams.

Leaner Fourier Transforms By Helen Knight, MIT New algorithm can separate signals into their individual frequencies using a minimal number of samples. The fast Fourier transform, one of the most important algorithms of the 20th century, revolutionized signal processing. But ever since its development in the 1960s, computer scientists have been searching for an algorithm to better it. Last year MIT researchers Piotr Indyk and Dina Katabi did just that, unveiling an algorithm that in some circumstances can perform Fourier transforms hundreds of times more quickly than the fast Fourier transform (FFT). Now Indyk, a professor of computer science and engineering and a member of the Theory of Computation Group within the Computer Science and Artificial Intelligence Laboratory (CSAIL), and his team have gone a step further, significantly reducing the number of samples that must be taken from a given signal in order to perform a Fourier transform operation. Close to theoretical minimum

Chinese Numbers Chinese Numbers The Chinese Number Conversion Perl module used above to convert between Chinese character numbers and Arabic numbers is available for download. A Brief Description of the Chinese Number System While China has for many uses adopted the Arabic numeral system familiar around the world, it also still uses its native Chinese character number system. Eleven in Chinese is "ten one". What is different from American English is that when you get to ten-thousand, Chinese has its own word (wan4), unlike English where you must use a compound of ten and thousand. Regular Chinese characters for numbers use relatively few strokes. As in English, one can also abbreviate a number by just listing the digits with the tens, hundreds, thousands, etc. omitted (as the web counter below does). When talking about amounts, sometimes a variant of two is used in the hundred-million, ten-thousand, thousand, or hundreds place: (liang3). (nian4) for twenty and (sa4) for thirty. (dian3). This page has had

Braess’ Paradox – or Why improving something can make it worse | Oasys Software Blog On Earth Day in 1990 they closed New York’s 42nd Street for the parade[1] and in 1999 one of the three main traffic tunnels in South Korea’s capital city was shut down for maintenance[2]. Bizarrely, despite both routes being heavily used for traffic, the result was not the predicted chaos and jams, instead the traffic flows improved in both cases. Inspired by their experience, Seoul’s city planners subsequently demolished a motorway leading into the heart of the city and experienced exactly the same strange result, with the added benefit of creating a 5-mile long, 1,000 acre park for the local inhabitants[3]. It is counter-intuitive that you can improve commuters’ travel times by reducing route options: after all planners normally want to improve things by adding routes. This paradox was first explored by Dietric Braess in 1968[4,5] where he explored the maths behind how adding route choices to a network can sometimes make everyone’s travel time worse. 6*3+26 = 44 minutes Lv + Rv = 1000