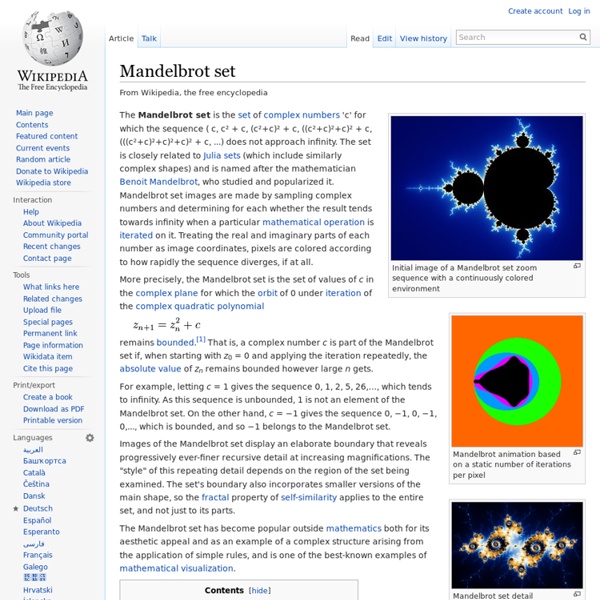 Fractal Figure 1a. The Mandelbrot set illustrates self-similarity. As the image is enlarged, the same pattern re-appears so that it is virtually impossible to determine the scale being examined. Figure 1b. The same fractal magnified six times. Figure 1c. Figure 1d. Fractals are distinguished from regular geometric figures by their fractal dimensional scaling. As mathematical equations, fractals are usually nowhere differentiable.[2][5][8] An infinite fractal curve can be conceived of as winding through space differently from an ordinary line, still being a 1-dimensional line yet having a fractal dimension indicating it also resembles a surface.[7]:48[2]:15 There is some disagreement amongst authorities about how the concept of a fractal should be formally defined. Introduction[edit] The word "fractal" often has different connotations for laypeople than mathematicians, where the layperson is more likely to be familiar with fractal art than a mathematical conception. History[edit] Figure 2.

Edward Witten Edward Witten (/ˈwɪtən/; born August 26, 1951) is an American theoretical physicist and professor of mathematical physics at the Institute for Advanced Study in Princeton, New Jersey. Witten is a researcher in string theory, quantum gravity, supersymmetric quantum field theories, and other areas of mathematical physics. Birth and education[edit] Witten was born in Baltimore, Maryland. He is the son of Lorraine (Wollach) Witten and Louis Witten, a theoretical physicist specializing in gravitation and general relativity.[3] Witten attended the Park School of Baltimore (class of '68), and received his Bachelor of Arts with a major in history and minor in linguistics from Brandeis University in 1971. Research[edit] Fields medal work[edit] Witten was awarded the Fields Medal by the International Mathematical Union in 1990, becoming the first physicist to win the prize. In a written address to the ICM, Michael Atiyah said of Witten,[1] M-theory[edit] Other work[edit] Awards and honors[edit]

Dreaming of Electric Sheep A direct link to the above video is at "Life is but a dream" - English Nursery Rhyme, Row, Row, Row Your Boat Ever hear of electricsheep.org? Let me quote from the website: Electric Sheep is a free, open source screen saver created by Scott Draves. Here's a YouTube video by Scott Draves called "165 Star Oasis" which uses Electric Sheep images. With this blog entry and the next one, we're going to talk about trying to visualize moving around within the place where, as quantum physicists like Zeilinger and Lloyd tell us, "Information Equals Reality": this is the place we were just trying to think about in "The Big Bang and the Big Pie". In my recent entry "Why Stop at Ten Dimensions?" How can what looks like randomness generate something as wonderful and complex as the universe we see around us? grouping and symmetry. Enjoy the journey, Rob Bryanton Next: Imagining the Omniverse

Stephen Hawking English theoretical physicist, cosmologist, and author (1942–2018) Stephen William Hawking CH CBE FRS FRSA (8 January 1942 – 14 March 2018) was an English theoretical physicist, cosmologist, and author who, at the time of his death, was director of research at the Centre for Theoretical Cosmology at the University of Cambridge.[17][18][7] Between 1979 and 2009, he was the Lucasian Professor of Mathematics at the University of Cambridge. Hawking was born in Oxford, into a family of physicians. In October 1959, at the age of 17, he began his university education at University College, Oxford, where he received a first-class BA degree in physics. In October 1962, he began his graduate work at Trinity Hall, Cambridge, where in March 1966, he obtained his PhD degree in applied mathematics and theoretical physics, specialising in general relativity and cosmology. Early life Family Hawking was born on 8 January 1942[24][25] in Oxford to Frank and Isobel Eileen Hawking (née Walker). Career Death

Tenth Dimension Polls Archive 23 A direct link to the above video is at Poll 23 - "Why is it impossible to exceed the speed of light? Because our universe is being created one planck length at a time, at the speed of light." I wonder if some people disagreed with the above statement because of my choice of the word "created": terms like this can be confusing when the universe we're imagining is really just being observed one planck length after another from out of a wave function of probably outcomes. The Speed of Light Cannot Be Exceeded within SpacetimeIn my book I talk about the speed of light being an independent constant: no matter how fast you travel, no matter how close to the speed of light you get, light continues to travel at the speed of light away from you. The October issue of Scientific American has an article on Loop Quantum Gravity, which talks about a concept called "atoms of spacetime". Enjoy the journey, Rob Bryanton Next: Create a Universe with One Easy Click

Zenith Diagram showing the relationship between the zenith, the nadir, and different types of horizon. Note that the zenith is opposite the nadir. The zenith is an imaginary point directly "above" a particular location, on the imaginary celestial sphere. Zenith may be used as a name which means success and power. Origin[edit] The root of the word "zenith" in Proto-Indo-European was reconstructed as '*mei-' ("to change"). Relevance and use[edit] Shadows of trees when the sun is directly overhead (at the zenith). The term zenith is sometimes used to refer to the highest point reached by a celestial body during its apparent orbit around a given point of observation.[6] This sense of the word is often used to describe the location of the Sun ("The sun reached its zenith..."), but to an astronomer the sun does not have its own zenith, and is at the zenith only if it is directly overhead. See also[edit] References[edit] Glickman, Todd S. (2000).

Strange matter Strange matter is a particular form of quark matter, usually thought of as a "liquid" of up, down, and strange quarks. It is to be contrasted with nuclear matter, which is a liquid of neutrons and protons (which themselves are built out of up and down quarks), and with non-strange quark matter, which is a quark liquid containing only up and down quarks. At high enough density, strange matter is expected to be color superconducting. Strange matter is hypothesized to occur in the core of neutron stars, or, more speculatively, as isolated droplets that may vary in size from femtometers (strangelets) to kilometers (quark stars). Two meanings of the term "strange matter"[edit] In particle physics and astrophysics, the term is used in two ways, one broader and the other more specific [1][2] The broader meaning is just quark matter that contains three flavors of quarks: up, down, and strange. Strange matter that is only stable at high pressure[edit] See also[edit] References[edit]