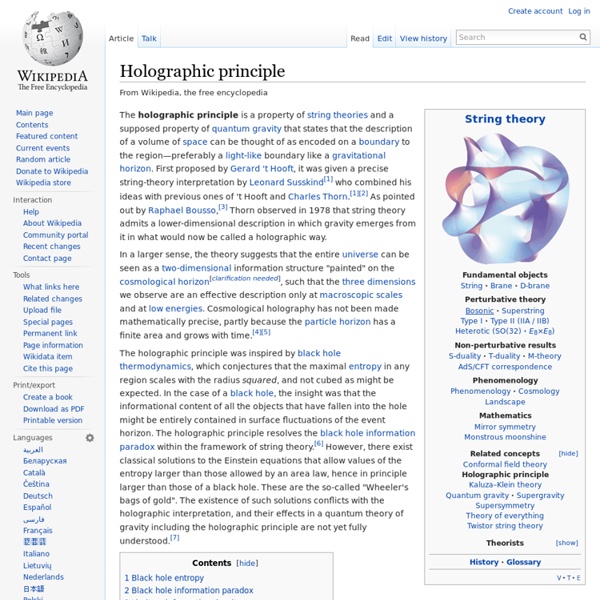 In a larger sense, the theory suggests that the entire universe can be seen as a two-dimensional information structure "painted" on the cosmological horizon[clarification needed], such that the three dimensions we observe are an effective description only at macroscopic scales and at low energies. Cosmological holography has not been made mathematically precise, partly because the particle horizon has a finite area and grows with time.[4][5] The holographic principle was inspired by black hole thermodynamics, which conjectures that the maximal entropy in any region scales with the radius squared, and not cubed as might be expected. Black hole entropy[edit] An object with entropy is microscopically random, like a hot gas. But Jacob Bekenstein noted that this leads to a violation of the second law of thermodynamics. Bekenstein assumed that black holes are maximum entropy objects—that they have more entropy than anything else in the same volume. Black hole information paradox[edit] General

Mereology Mereology has been axiomatized in various ways as applications of predicate logic to formal ontology, of which mereology is an important part. A common element of such axiomatizations is the assumption, shared with inclusion, that the part-whole relation orders its universe, meaning that everything is a part of itself (reflexivity), that a part of a part of a whole is itself a part of that whole (transitivity), and that two distinct entities cannot each be a part of the other (antisymmetry). A variant of this axiomatization denies that anything is ever part of itself (irreflexive) while accepting transitivity, from which antisymmetry follows automatically. Standard university texts on logic and mathematics are silent about mereology, which has undoubtedly contributed to its obscurity. History[edit] A.N. In 1930, Henry Leonard completed a Harvard Ph.D. dissertation in philosophy, setting out a formal theory of the part-whole relation. Axioms and primitive notions[edit] The axioms are:

Blue Brain Project - Wikipedia The Blue Brain Project is a Swiss brain research initiative that aims to create a digital reconstruction of rodent and eventually human brains by reverse-engineering mammalian brain circuitry. The project was founded in May 2005 by the Brain and Mind Institute of École Polytechnique Fédérale de Lausanne (EPFL) in Switzerland. Its mission is to use biologically-detailed digital reconstructions and simulations of the mammalian brain to identify the fundamental principles of brain structure and function. There are a number of sub-projects, including the Cajal Blue Brain, which is coordinated by the Supercomputing and Visualization Center of Madrid (CeSViMa), and others run by universities and independent laboratories. Goal[edit] Progress[edit] In November 2007,[7] the project reported the end of the first phase, delivering a data-driven process for creating, validating, and researching the neocortical column. By 2005, the first cellular model was completed. Funding[edit] Related projects[edit]

Direct and indirect realism Naïve realism argues we perceive the world directly Naïve realism, also known as direct realism or common sense realism, is a philosophy of mind rooted in a theory of perception that claims that the senses provide us with direct awareness of the external world. In contrast, some forms of idealism assert that no world exists apart from mind-dependent ideas and some forms of skepticism say we cannot trust our senses. Naïve realism is known as direct as against indirect or representative realism when its arguments are developed to counter the latter position, also known as epistemological dualism;[2] that our conscious experience is not of the real world but of an internal representation of the world. Theory[edit] The naïve realist theory may be characterized as the acceptance of the following five beliefs: In the area of visual perception in psychology, the leading direct realist theorist was J. Naïve and scientific realism[edit] Realism and quantum physics[edit] References[edit] See also[edit]

Simulation hypothesis - Wikipedia The simulation hypothesis or simulation theory proposes that all of reality, including the Earth and the universe, is in fact an artificial simulation, most likely a computer simulation. Some versions rely on the development of a simulated reality, a proposed technology that would seem realistic enough to convince its inhabitants the simulation was real. The hypothesis has been a central plot device of many science fiction stories and films. Origins[edit] Simulation hypothesis[edit] Many works of science fiction as well as some forecasts by serious technologists and futurologists predict that enormous amounts of computing power will be available in the future. Ancestor simulation[edit] In 2003, philosopher Nick Bostrom proposed a trilemma that he called "the simulation argument". As a corollary to the trilemma, Bostrom states that "Unless we are now living in a simulation, our descendants will almost certainly never run an ancestor-simulation Criticism of Bostrom's anthropic reasoning[edit]

Geometrical frustration In condensed matter physics, the term geometrical frustration (or in short: frustration [1]) refers to a phenomenon, where atoms tend to stick to non-trivial positions or where, on a regular crystal lattice, conflicting inter-atomic forces (each one favoring rather simple, but different structures) lead to quite complex structures. As a consequence of the frustration in the geometry or in the forces, a plenitude of distinct ground states may result, at zero temperature, and usual thermal ordering may be suppressed, at higher temperatures. Much studied examples are amorphous materials, glasses, or dilute magnets. Magnetic ordering[edit] Similarly in three dimensions, four spins arranged in a tetrahedron (Figure 2) may experience geometric frustration. Figure 1: Antiferromagnetically interacting spins in a triangular arrangement Figure 2: Antiferromagnetically interacting spins in a tetrahedral arrangement Figure 3: Spins along the easy axes of a tetrahedron Mathematical definition[edit] resp.

Many-worlds interpretation The quantum-mechanical "Schrödinger's cat" theorem according to the many-worlds interpretation. In this interpretation, every event is a branch point; the cat is both alive and dead, even before the box is opened, but the "alive" and "dead" cats are in different branches of the universe, both of which are equally real, but which do not interact with each other.[1] The many-worlds interpretation is an interpretation of quantum mechanics that asserts the objective reality of the universal wavefunction and denies the actuality of wavefunction collapse. Many-worlds implies that all possible alternate histories and futures are real, each representing an actual "world" (or "universe"). In layman's terms, the hypothesis states there is a very large—perhaps infinite[2]—number of universes, and everything that could possibly have happened in our past, but did not, has occurred in the past of some other universe or universes. Origin[edit] Outline[edit] Interpreting wavefunction collapse[edit] where

Neutral monism Neutral monism, in philosophy, is the metaphysical view that the mental and the physical are two ways of organizing or describing the same elements, which are themselves "neutral", that is, neither physical nor mental. This view denies that the mental and the physical are two fundamentally different things. Rather, neutral monism claims the universe consists of only one kind of stuff, in the form of neutral elements that are in themselves neither mental nor physical; these neutral elements might have the properties of color and shape, just as we experience those properties, but these shaped and colored elements do not exist in a mind (considered as a substantial entity, whether dualistically or physicalistically); they exist on their own. History[edit] A diagram with neutral monism compared to Cartesian dualism, physicalism and idealism. Some of the first views of the neutral monism position about the mind–body relationship in philosophy can be attributed to C. William James[edit]

Unobservable "Unobservables" is a reference similar to Immanuel Kant's distinction between noumena (things-in-themselves, i.e., raw things in their necessarily unknowable state,[1] before they pass through the formalizing apparatus of the senses and the mind in order to become perceived objects) and phenomena (the perceived object). According to Kant humans can never know noumena; all that humans know is the phenomena. Kant's distinction is similar to John Locke's distinction between primary and secondary qualities. Secondary qualities are what humans perceive such as redness, chirping, heat, mustiness or sweetness. Primary qualities would be the actual qualities of the things themselves which give rise to the secondary qualities which humans perceive.[citation needed] The ontological nature and epistemological issues concerning unobservables is a central topic in philosophy of science. Metcalf[2][self-published source?] References[edit] See also[edit]

String-net liquid In condensed matter physics, a string-net is an extended object whose collective behavior has been proposed as a physical mechanism for topological order by Michael A. Levin and Xiao-Gang Wen. A particular string-net model may involve only closed loops; or networks of oriented, labeled strings obeying branching rules given by some gauge group; or still more general networks.[1] Their model purports to show the derivation of photons, electrons, and U(1) gauge charge, small (relative to the planck mass) but nonzero masses, and suggestions that the leptons, quarks, and gluons, can be modeled in the same way. In other words, string-net condensation provides an unification of photon and electron (or gauge bosons and fermions). For strings labeled by the positive integers, string-nets are the spin networks studied in loop quantum gravity. Herbertsmithite may be an example of string-net matter.[5][6] Examples[edit] Z2 spin liquid[edit] The toric code[edit] References[edit]

Direct and indirect realism Direct realism argues we perceive the world directly History[edit] Aristotle was the first to provide a description of direct realism. In On the Soul he describes how a seer is informed of the object itself by way of the hylomorphic form carried over the intervening material continuum with which the eye is impressed.[5] Indirect realism was popular with early modern philosophers such as René Descartes and John Locke. Locke categorized qualities as follows: Primary qualities are qualities which are 'explanatorily basic' - which is to say, they can be referred to as the explanation for other qualities or phenomena without requiring explanation themselves - and they are distinct in that our sensory experience of them resembles them in reality. In contemporary philosophy, epistemological dualism has come under sustained attack by philosophers like Wittgenstein (the private language argument) and Wilfrid Sellars in his seminal essay "Empiricism and the Philosophy of Mind."

Quantum Entanglement and Information First published Mon Aug 13, 2001; substantive revision Thu Aug 26, 2010 Quantum entanglement is a physical resource, like energy, associated with the peculiar nonclassical correlations that are possible between separated quantum systems. Entanglement can be measured, transformed, and purified. A pair of quantum systems in an entangled state can be used as a quantum information channel to perform computational and cryptographic tasks that are impossible for classical systems. The general study of the information-processing capabilities of quantum systems is the subject of quantum information theory. 1. In 1935 and 1936, Schrödinger published a two-part article in the Proceedings of the Cambridge Philosophical Society in which he discussed and extended a remarkable argument by Einstein, Podolsky, and Rosen. It should not be supposed that Einstein's definition of a complete theory included the requirement that it be deterministic. He added (Schrödinger, 1935; p. 555): 2. 3. 4.