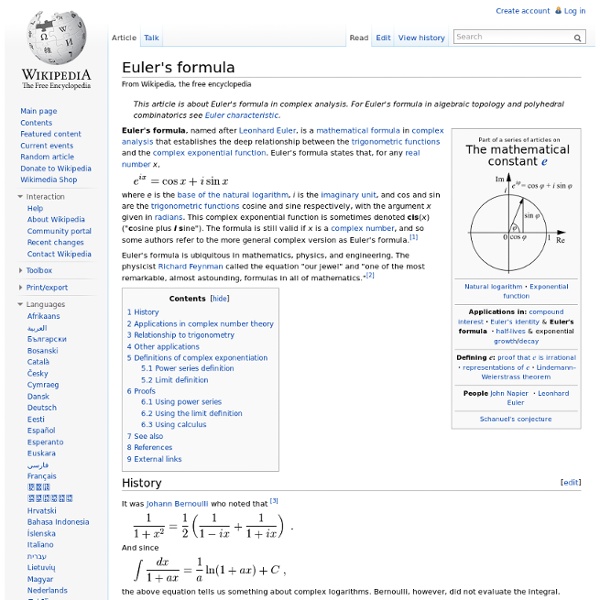 This article is about Euler's formula in complex analysis. For Euler's formula in algebraic topology and polyhedral combinatorics see Euler characteristic. Euler's formula, named after Leonhard Euler, is a mathematical formula in complex analysis that establishes the fundamental relationship between the trigonometric functions and the complex exponential function. Euler's formula is ubiquitous in mathematics, physics, and engineering. History[edit] It was Johann Bernoulli who noted that[3] And since the above equation tells us something about complex logarithms. Bernoulli's correspondence with Euler (who also knew the above equation) shows that Bernoulli did not fully understand complex logarithms. Meanwhile, Roger Cotes, in 1714, discovered that ("ln" is the natural logarithm with base e).[4] Cotes missed the fact that a complex logarithm can have infinitely many values, differing by multiples of 2π, due to the periodicity of the trigonometric functions. where the real part the imaginary part

Complex plane Geometric representation of z and its conjugate z̅ in the complex plane. The distance along the light blue line from the origin to the point z is the modulus or absolute value of z. The angle φ is the argument of z. In mathematics, the complex plane or z-plane is a geometric representation of the complex numbers established by the real axis and the orthogonal imaginary axis. Notational conventions[edit] In complex analysis the complex numbers are customarily represented by the symbol z, which can be separated into its real (x) and imaginary (y) parts, like this: for example: z = 4 + 5i, where x and y are real numbers, and i is the imaginary unit. In the Cartesian plane the point (x, y) can also be represented in polar coordinates as where Here |z| is the absolute value or modulus of the complex number z; θ, the argument of z, is usually taken on the interval 0 ≤ θ < 2π; and the last equality (to |z|eiθ) is taken from Euler's formula. Stereographic projections[edit] Cutting the plane[edit]

Avogadro constant Previous definitions of chemical quantity involved Avogadro's number, a historical term closely related to the Avogadro constant but defined differently: Avogadro's number was initially defined by Jean Baptiste Perrin as the number of atoms in one gram-molecule of hydrogen. It was later redefined as the number of atoms in 12 grams of the isotope carbon-12 and still later generalized to relate amounts of a substance to their molecular weight.[4] For instance, to a first approximation, 1 gram of hydrogen, which has a mass number of 1 (atomic number 1), has 6.022×1023 hydrogen atoms. Similarly, 12 grams of carbon 12, with the mass number of 12 (atomic number 6), has the same number of carbon atoms, 6.022×1023. Avogadro's number is a dimensionless quantity and has the numerical value of the Avogadro constant given in base units. The Avogadro constant is fundamental to understanding both the makeup of molecules and their interactions and combinations. History[edit] [dubious ] Measurement[edit]

Imaginary unit i in the complex or cartesian plane. Real numbers lie on the horizontal axis, and imaginary numbers lie on the vertical axis There are in fact two complex square roots of −1, namely i and −i, just as there are two complex square roots of every other real number, except zero, which has one double square root. In contexts where i is ambiguous or problematic, j or the Greek ι (see alternative notations) is sometimes used. In the disciplines of electrical engineering and control systems engineering, the imaginary unit is often denoted by j instead of i, because i is commonly used to denote electric current in these disciplines. For the history of the imaginary unit, see Complex number: History. Definition[edit] With i defined this way, it follows directly from algebra that i and −i are both square roots of −1. Similarly, as with any non-zero real number: i and −i[edit] and are solutions to the matrix equation Proper use[edit] (incorrect). (ambiguous). Similarly: The calculation rules Properties[edit]

Kepler conjecture The Kepler conjecture, named after the 17th-century German mathematician and astronomer Johannes Kepler, is a mathematical conjecture about sphere packing in three-dimensional Euclidean space. It says that no arrangement of equally sized spheres filling space has a greater average density than that of the cubic close packing (face-centered cubic) and hexagonal close packing arrangements. The density of these arrangements is slightly greater than 74%. In 1998 Thomas Hales, following an approach suggested by Fejes Tóth (1953), announced that he had a proof of the Kepler conjecture. Hales' proof is a proof by exhaustion involving the checking of many individual cases using complex computer calculations. Referees have said that they are "99% certain" of the correctness of Hales' proof, so the Kepler conjecture is now very close to being accepted as a theorem. Background[edit] Diagrams of cubic close packing (left) and hexagonal close packing (right). Origins[edit] Nineteenth century[edit]

Solution of the Poincaré conjecture By contrast, neither of the two colored loops on this torus can be continuously tightened to a point. A torus is not homeomorphic to a sphere. Every simply connected, closed 3-manifold is homeomorphic to the 3-sphere. An equivalent form of the conjecture involves a coarser form of equivalence than homeomorphism called homotopy equivalence: if a 3-manifold is homotopy equivalent to the 3-sphere, then it is necessarily homeomorphic to it. The Poincaré conjecture, before being proven, was one of the most important open questions in topology. It is one of the seven Millennium Prize Problems, for which the Clay Mathematics Institute offered a $1,000,000 prize for the first correct solution. History[edit] Poincaré's question[edit] At the beginning of the 20th century, Henri Poincaré was working on the foundations of topology—what would later be called combinatorial topology and then algebraic topology. The original phrasing was as follows: Attempted solutions[edit] Dimensions[edit] Solution[edit]

Tangent Tangent to a curve. The red line is tangential to the curve at the point marked by a red dot. Tangent plane to a sphere As it passes through the point where the tangent line and the curve meet, called the point of tangency, the tangent line is "going in the same direction" as the curve, and is thus the best straight-line approximation to the curve at that point. The word tangent comes from the Latin tangere, to touch. History[edit] The first definition of a tangent was "a right line which touches a curve, but which when produced, does not cut it".[1] This old definition prevents inflection points from having any tangent. Pierre de Fermat developed a general technique for determining the tangents of a curve using his method of adequality in the 1630s. Leibniz defined the tangent line as the line through a pair of infinitely close points on the curve. Tangent line to a curve[edit] At each point, the line is always tangent to the curve. Analytical approach[edit] Intuitive description[edit] by but If

Sine For the angle α, the sine function gives the ratio of the length of the opposite side to the length of the hypotenuse. The sine function graphed on the Cartesian plane. In this graph, the angle x is given in radians (π = 180°). The sine and cosine functions are related in multiple ways. is . . In mathematics, the sine function is a trigonometric function of an angle. The sine function is commonly used to model periodic phenomena such as sound and light waves, the position and velocity of harmonic oscillators, sunlight intensity and day length, and average temperature variations throughout the year. The function sine can be traced to the jyā and koṭi-jyā functions used in Gupta period Indian astronomy (Aryabhatiya, Surya Siddhanta), via translation from Sanskrit to Arabic and then from Arabic to Latin.[1] The word "sine" comes from a Latin mistranslation of the Arabic jiba, which is a transliteration of the Sanskrit word for half the chord, jya-ardha.[2] Relation to slope[edit] Inverse[edit]

Cardioid A cardioid generated by a rolling circle around another circle and tracing one point on the edge of it. A cardioid given as the envelope of circles whose centers lie on a given circle and which pass through a fixed point on the given circle. The name was coined by de Castillon in 1741[2] but had been the subject of study decades beforehand.[3] Named for its heart-like form, it is shaped more like the outline of the cross section of a round apple without the stalk. A cardioid microphone exhibits an acoustic pickup pattern that, when graphed in two dimensions, resembles a cardioid, (any 2d plane containing the 3d straight line of the microphone body.) In three dimensions, the cardioid is shaped like an apple centred on the microphone which is the "stalk" of the apple. Equations[edit] Based on the rolling circle description, with the fixed circle having the origin as its center, and both circles having radius a, the cardioid is given by the following parametric equations: or Inverse curve[edit]