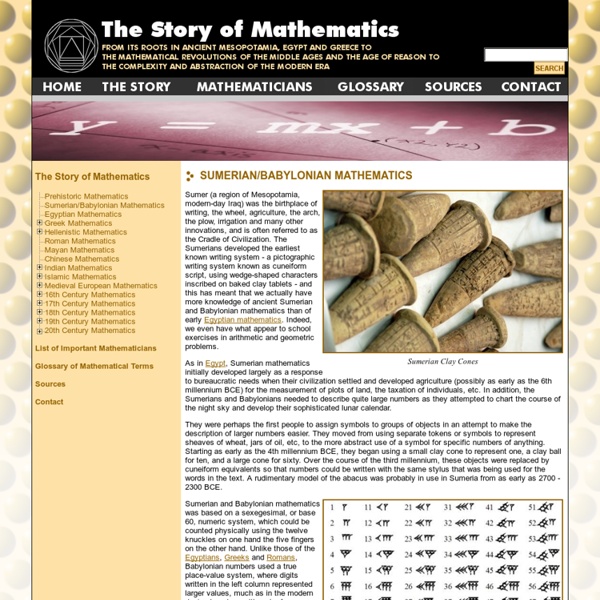 Sumer (a region of Mesopotamia, modern-day Iraq) was the birthplace of writing, the wheel, agriculture, the arch, the plow, irrigation and many other innovations, and is often referred to as the Cradle of Civilization. The Sumerians developed the earliest known writing system - a pictographic writing system known as cuneiform script, using wedge-shaped characters inscribed on baked clay tablets - and this has meant that we actually have more knowledge of ancient Sumerian and Babylonian mathematics than of early Egyptian mathematics. Indeed, we even have what appear to school exercises in arithmetic and geometric problems. As in Egypt, Sumerian mathematics initially developed largely as a response to bureaucratic needs when their civilization settled and developed agriculture (possibly as early as the 6th millennium BCE) for the measurement of plots of land, the taxation of individuals, etc. in the Babylonian system represented 3,600 plus 60 plus 1, or 3,661. ) and a ten symbol ( ).

The Historical Development of Mathematics by Rit Nosotro Change Over Time essay Describe the development of mathematics. Thesis: Summary: With our modern understanding of mathematics, its historical development may seem straightforward, and the ideas we have inherited about mathematics appear obvious. The 13 Most Important Numbers in the Universe - James D. Stein's Cosmic Numbers In the 17th century, scientists understood three phases of matter—solids, liquids and gases (the discovery of plasma, the fourth phase of matter, lay centuries in the future). Back then, solids and liquids were much harder to work with than gases because changes in solids and liquids were difficult to measure with the equipment of the time. So many experimentalists played around with gases to try to deduce fundamental physical laws. Robert Boyle was perhaps the first great experimentalist, and was responsible for what we now consider to be the essence of experimentation: vary one or more parameter, and see how other parameters change in response. It may seem obvious in retrospect, but hindsight, as the physicist Leo Szilard once remarked, is notably more accurate than foresight.

Chronology for 30000BC to 500BC About 30000BC Palaeolithic peoples in central Europe and France record numbers on bones. About 25000BC Early geometric designs used. About 5000BC A decimal number system is in use in Egypt. About 4000BC Babylonian and Egyptian calendars in use. About 3400BC The first symbols for numbers, simple straight lines, are used in Egypt. About 3000BC The abacus is developed in the Middle East and in areas around the Mediterranean. 7 Skills To Become Super Smart People aren’t born smart. They become smart. And to become smart you need a well-defined set of skills. Here are some tips and resources for acquiring those skills. Memory If you can’t remember what you’re trying to learn, you’re not really learning.

Prehistoric Mathematics Our prehistoric ancestors would have had a general sensibility about amounts, and would have instinctively known the difference between, say, one and two antelopes. But the intellectual leap from the concrete idea of two things to the invention of a symbol or word for the abstract idea of "two" took many ages to come about. Even today, there are isolated hunter-gatherer tribes in Amazonia which only have words for "one", "two" and "many", and others which only have words for numbers up to five. C-ship: Relativistic ray traced images C-ship: Relativistic ray traced images Welcome aboard C-ship, exploring flight near the speed of light! C-ship helps you understand Einstein's theory of Special Relativity intuitively through the medium of computer-synthesised images. To view the images in this document, you need a graphics-oriented Web browser. We'll be looking at lots of pictures on our journey. Sending large pictures across the Internet consumes precious network bandwidth and can take a long time.

Statistical Visualization For his book The Visual Miscellaneum, David McCandless, along with Lee Byron, had a look at breakups on Facebook, according to status updates. They looked for the phrase "we broke up because" in status updates, and then graphed the frequencies over time. Why they couldn't just look at updates to relationship status, I'm not sure. Notice the peak leading up to the holiday season and spring cleaning. Then there's the people who think it's a funny April Fool's joke to say the broke up with their significant other.

Egyptian Mathematics The early Egyptians settled along the fertile Nile valley as early as about 6000 BCE, and they began to record the patterns of lunar phases and the seasons, both for agricultural and religious reasons. The Pharaoh’s surveyors used measurements based on body parts (a palm was the width of the hand, a cubit the measurement from elbow to fingertips) to measure land and buildings very early in Egyptian history, and a decimal numeric system was developed based on our ten fingers. The oldest mathematical text from ancient Egypt discovered so far, though, is the Moscow Papyrus, which dates from the Egyptian Middle Kingdom around 2000 - 1800 BCE.

Techniques for Creative Thinking Collectively, there are several hundred techniques published in books by Michael Michalko, Andy Van Gundy, James Higgins, Dilip Mukerjea and others. Techniques are like tools in a workshop, with different tools for different parts of the creative process. For example, there are techniques for defining a problem, exploring attributes of a problem, generating alternatives, visual explorations, metaphors, analogies, and evaluating and implementing ideas.

Chinese Mathematics Even as mathematical developments in the ancient Greek world were beginning to falter during the final centuries BCE, the burgeoning trade empire of China was leading Chinese mathematics to ever greater heights. The simple but efficient ancient Chinese numbering system, which dates back to at least the 2nd millennium BCE, used small bamboo rods arranged to represent the numbers 1 to 9, which were then places in columns representing units, tens, hundreds, thousands, etc. It was therefore a decimal place value system, very similar to the one we use today - indeed it was the first such number system, adopted by the Chinese over a thousand years before it was adopted in the West - and it made even quite complex calculations very quick and easy. Written numbers, however, employed the slightly less efficient system of using a different symbol for tens, hundreds, thousands, etc.

List of mathematical symbols When reading the list, it is important to recognize that a mathematical concept is independent of the symbol chosen to represent it. For many of the symbols below, the symbol is usually synonymous with the corresponding concept (ultimately an arbitrary choice made as a result of the cumulative history of mathematics), but in some situations a different convention may be used. For example, depending on context, the triple bar "≡" may represent congruence or a definition. Further, in mathematical logic, numerical equality is sometimes represented by "≡" instead of "=", with the latter representing equality of well-formed formulas. Canadian Social Statistics - Statistiques sociales du Canada Updated April 13, 2014 Page révisée le 13 avril 2014 [ Go to Canadian Social Research Links Home Page ] And another one gone And another one gone, Another one bites the dust. [Source : Queen] Statistics Canada's world-class data collection has been trimmed, again. February 24, 2014 By Gilles: As a result of the 2012 federal budget cuts, there are now 2,000+ fewer workers at StatCan [ ] --- out of a workforce of about 5,000.