Presenters to lead Children in Need rambles. Matt Baker, Ellie Harrison, Adam Henson, John Craven and Anita Rani are to participate in the first ever Countryfile Ramble for BBC Children in Need on the weekend of 10-11 October. 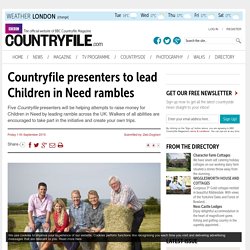 Members of the public are encouraged to join the presenters’ walks and start their own to raise money for charity as part of a nationwide fundraising mission. The routes range in difficulty from John’s relatively flat walk by Loch Leven in Central Scotland to Matt’s 7 to 8-hour walk in Snowdonia, which incorporates scrambling and climbing. Anita is set to walk through Windsor Great Park in Berkshire, a route also suitable for pushchairs and wheelchair users. Ellie will walk along the spectacular Jurassic Coast in Dorset.

And Adam will be leading ramblers on a challenging but stunning route in the Peak District. Tickets will be made available to members of a public via a random draw, with a proportion reserved for those who live near to where the walks are taking place. 1. 2. Health Rewards. CharityMiles App Donates for Every Step You Take. Running is good for you, but what if running were also good for someone miles away? 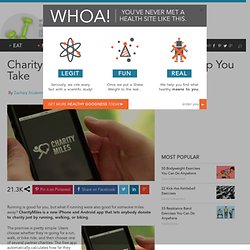 CharityMiles is a new iPhone and Android app that lets anybody donate to charity just by running, walking, or biking. The premise is pretty simple: Users choose whether they’re going for a run, walk, or bike ride, and then choose one of several partner charities. The free app automatically calculates how far they travel. CharityMiles donates $0.25 for every walking or running mile and $0.10 for every mile biked. The goal is to turn daily exercise into a charitable activity, not to make fitness a drain on your wallet.

CharityMiles is one of the latest companies trying to initiate social change in a sustainable way. The app does have some marketing tricks up its sleeve. Fitness tips for women working out over 50. If you're over 50, some say you're "over the hill. 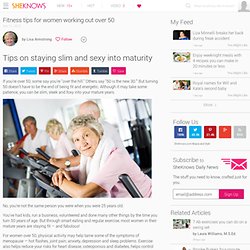 " Others say "50 is the new 30.'" But turning 50 doesn't have to be the end of being fit and energetic. Although it may take some patience, you can be slim, sleek and foxy into your mature years. No, you're not the same person you were when you were 25 years old. You’ve had kids, run a business, volunteered and done many other things by the time you turn 50 years of age. For women over 50, physical activity may help tame some of the symptoms of menopause — hot flashes, joint pain, anxiety, depression and sleep problems. Where Have All the Walkers Gone? Photograph By Thinkstock Despite countless studies showing that walking more makes us happier and fitter and promotes a longer life, walking as a mode of transportation has largely been abandoned. 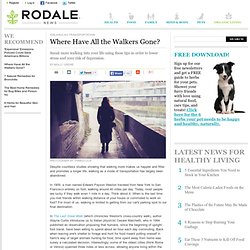 In 1909, a man named Edward Payson Weston traveled from New York to San Francisco entirely on foot, walking around 40 miles per day. Go4Life. Walk more cancer patient walks. Walking for Health. Walking works, and we have the proof! 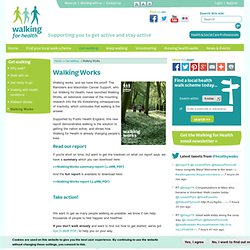 The Ramblers and Macmillan Cancer Support, who run Walking for Health, have launched Walking Works, an extensive overview of the mounting research into the life threatening consequences of inactivity, which concludes that walking is the answer. Supported by Public Health England, this new report demonstrates walking is the solution to getting the nation active, and shows how Walking for Health is already changing people’s lives.

Read our report. Physical activity now being checked as vital sign. Walking to Your Future. Walking is terrific exercise; it’s the only exercise in which participation doesn’t decline as we get older. 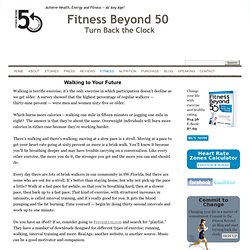 A survey showed that the highest percentage of regular walkers — thirty-nine percent — were men and women sixty-five or older. Which burns more calories – walking one mile in fifteen minutes or jogging one mile in eight? The answer is that they’re about the same. CFLRI_Bulletin%206. Dh_128146. Walk Therapy. Walk therapy is a counselling session where the counsellor and client walk while talking. 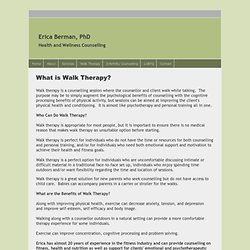 The purpose may be to simply augment the psychological benefits of counselling with the cognitive processing benefits of physical activity, but sessions can be aimed at improving the client's physical health and conditioning. It is almost like psychotherapy and personal training all in one. Who Can Do Walk Therapy? Walk therapy is appropriate for most people, but it is important to ensure there is no medical reason that makes walk therapy an unsuitable option before starting. These feet were made for walking. It requires no gym subscription, no spandex, Lycra or legwarmers and is an activity to which even the most fitness-phobic individual might not be averse. 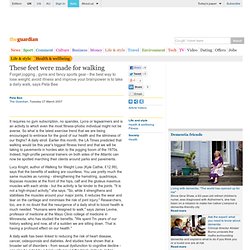 So what is the latest exercise trend that we are being encouraged to embrace for the good of our health and the sliminess of our thighs? A daily stroll. Earlier this month, the LA Times predicted that walking would be this year's biggest fitness trend and that we will be taking to pavements in hordes akin to the jogging boom of the 1970s. Indeed, high-profile personal trainers on both sides of the Atlantic can now be spotted marching their clients around parks and pavements. Lucy Knight, author of Walking for Weight Loss (Kyle Cathie, £12.99), says that the benefits of walking are countless. A daily walk has been linked to reducing the risk of heart disease, cancer, osteoporosis and diabetes. Technique.