Amazon Rainforest. The Amazon rainforest, also known as Amazonia, is one of the world's greatest natural resources. 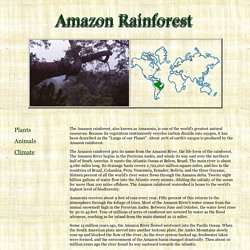 Because its vegetation continuously recycles carbon dioxide into oxygen, it has been described as the "Lungs of our Planet". PLANTS AND OUR PLANET - What is Global Warming?, What is Climate Change?, Why is Climate Change a Problem? Around planet Earth is a layer of gases. 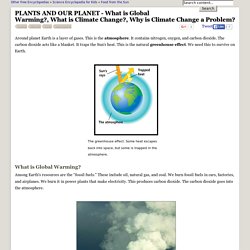 This is the atmosphere. It contains nitrogen, oxygen, and carbon dioxide. The carbon dioxide acts like a blanket. It traps the Sun's heat. Rain forest information for school kids. Every year an area of rainforest the size of New Jersey is cut down and destroyed. 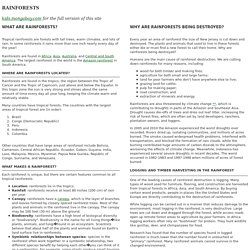 The plants and animals that used to live in these forests either die or must find a new forest to call their home. Why are rainforests being destroyed? Humans are the main cause of rainforest destruction. We are cutting down rainforests for many reasons, including: wood for both timber and making fires; agriculture for both small and large farms; land for poor farmers who don't have anywhere else to live; grazing land for cattle; pulp for making paper; road construction; andextraction of minerals and energy. Climate Change: 25 Things You Can Do. Start with one thing and convince one other person to do it, too. 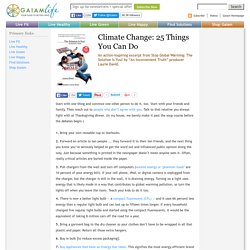 Start with your friends and family. Then reach out to people who don’t agree with you. Talk to that relative you always fight with at Thanksgiving dinner. (In my house, we barely make it past the soup course before the debates begin.) 1. 2. 3. 4. 5. 6. 7. 8. 9. If every household in the United States replaced just one roll of virgin toilet paper with one roll of recycled post-consumer waste recycled toilet paper, 424,000 trees would still be standing.

Why is the Amazon rainforest important? Rainforest Preservation Benefits. The Disappearing Rainforest (Source: Raintree) We are losing Earth's greatest biological treasures just as we are beginning to appreciate their true value. 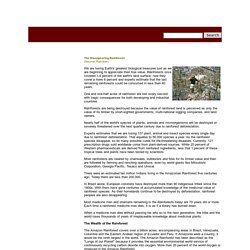 Rainforests once covered 1-4 percent of the earth's land surface; now they cover a mere 6 percent and experts estimate that the last remaining rainforests could be consumed in less than 40 years. Tropical Forests in Our Daily Lives. Tropical forests encompass not only mist enshrouded rainforests but also remote cloud forests, endangered dry forests and pine savannas. 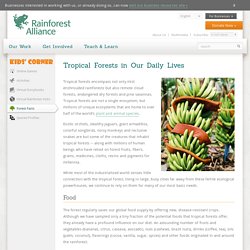 Tropical forests are not a single ecosystem, but millions of unique ecosystems that are home to over half of the world's plant and animal species. Exotic orchids, stealthy jaguars, giant armadillos, colorful songbirds, noisy monkeys and reclusive snakes are but some of the creatures that inhabit tropical forests -- along with millions of human beings who have relied on forest fruits, fibers, grains, medicines, cloths, resins and pigments for millennia. While most of the industrialized world senses little connection with the tropical forest, living in large, busy cities far away from these fertile ecological powerhouses, we continue to rely on them for many of our most basic needs. Food The forest regularly saves our global food supply by offering new, disease-resistant crops.

Medicine. 5 Ways Moving Near the Ocean Can Benefit Your Health. People have long theorized that living near the ocean is beneficial to one’s health, and now there is data to back that theory up. 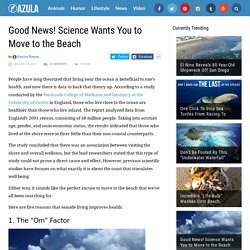 According to a study conducted by the Peninsula College of Medicine and Dentistry at the University of Exeter in England, those who live close to the ocean are healthier than those who live inland. The report analyzed data from England’s 2001 census, consisting of 48 million people. Taking into account age, gender, and socio-economic status, the results indicated that those who lived at the shore were in finer fettle than their non-coastal counterparts.

The study concluded that there was an association between visiting the shore and overall wellness, but the lead researchers stated that this type of study could not prove a direct cause and effect. However, previous scientific studies have focuses on what exactly it is about the coast that stimulates well being. Here are five reasons that seaside living improves health: 1. Source: Flickr/MattJP. Rainforest Facts For Kids - The Ultimate Guide. Welcome to Active Wild’s Rainforest Facts For Kids page – the ultimate guide to rainforests and the animals, plants and people that call them home. 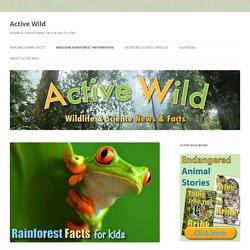 Find out all about rainforests and why they’re so special. You’ll also find out why they need our help … Other Rainforest Articles at Active Wild. Why Are Rainforests Important? Today’s Wonder of the Day was inspired by chloe from , AL. chloe Wonders, “why is the rain forrest so important?” 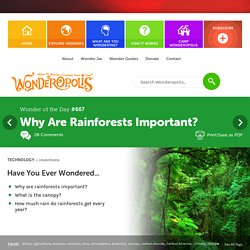 Thanks for WONDERing with us, chloe! Do you love trees? We do! And you should, too. Trees do all sorts of great things for humans, from taking in carbon dioxide and releasing oxygen to providing shade and places to build fabulous tree houses. Ocean and Human Health. What the Ocean Does for Our Planet and Us While nearly half of the world's human population lives within 50 miles of a coast, all of us depend on the ocean and the resources it provides, whether it be for food we eat or the oxygen we breathe. 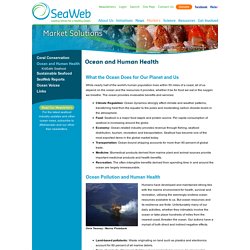 What impacts do humans have on the ocean? What impacts do humans have on the ocean? Oceans around the world are becoming degraded. Evidence shows that human activities, including intense fishing around the world, are altering ocean ecosystems beyond their natural state. According to numerous scientific studies, fish, shellfish, and other important species are declining in many places. These changes are impairing the ocean’s capacity to provide food, protect livelihoods, maintain clean water, and recover from environmental stresses like severe storms. Rainforest Medicine - Healing Medicines From The Amazon. A look at the botanical treasures, both known and undiscovered, that exist within tropical rainforests. The widespread destruction of tropical rainforest ecosystems and the consequent extinction of numerous plant and animal species is happening before we know even the most basic facts about what we are losing.

Covering only 6 percent of the Earth's surface, tropical moist forests contain at least half of all species. The abundant botanical resources of tropical forests have already provided tangible medical advances; yet only 1 percent of the known plant and animal species have been thoroughly examined for their medicinal potentials. Rainforest.

Kalimantan, Indonesia: Human Benefits From The Rainforest. Slash & Burn: The native people of Kalimantan have longed practice this method of agriculture. They chop down all the trees in an area and burn them to create nutrient rich ash for the soil. Even though the soil is fertile when the trees are burned, there are no additional supplies of nutrient, so after using the soil for agriculture for a short period of time the indigenous people have to slash and burn another area. Timber: During the early 2000s the "golden age" of logging was occurring in Kalimantan. Everyday 400 trucks would come and go with timber from deforestation.