"What are the Benefits of Genetically Modified Food?" 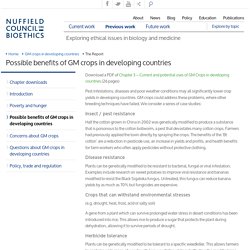 GM crops could address these problems, where other breeding techniques have failed. We consider a series of case studies: Insect / pest resistance Half the cotton grown in China in 2002 was genetically modified to produce a substance that is poisonous to the cotton bollworm, a pest that devastates many cotton crops. Disease resistance Plants can be genetically modified to be resistant to bacterial, fungal or viral infestation. Crops that can withstand environmental stresses (e.g. drought, heat, frost, acid or salty soil) A gene from a plant which can survive prolonged water stress in desert conditions has been introduced into rice. Herbicide tolerance Plants can be genetically modified to be tolerant to a specific weedkiller.

Improved nutritional value Biopharmaceuticals. Fact Sheet: Pros vs Cons. By: Ian Murnaghan BSc (hons), MSc - Updated: 18 Feb 2016| *Discuss With all of the controversy around genetically modified (GM) foods, sorting through huge volumes of information can seem like a daunting task. 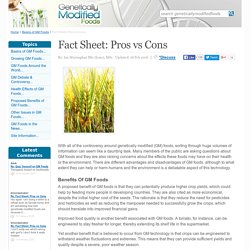 Many members of the public are asking questions about GM foods and they are also raising concerns about the effects these foods may have on their health or the environment. There are different advantages and disadvantages of GM foods, although to what extent they can help or harm humans and the environment is a debatable aspect of this technology.

Benefits Of GM Foods A proposed benefit of GM foods is that they can potentially produce higher crop yields, which could help by feeding more people in developing countries. Improved food quality is another benefit associated with GM foods. Yet another benefit that is believed to occur from GM technology is that crops can be engineered to withstand weather fluctuations and extremes. PBS - harvest of fear: viewpoints: what are the benefits? Charles Arntzen, Ph.D. 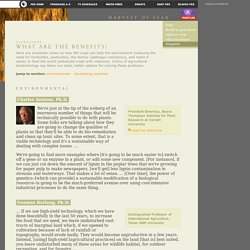 We're just at the tip of the iceberg of an enormous number of things that will be technically possible to do with plants. Some folks are talking about how they are going to change the qualities of plants so that they'll be able to do bio-remediation and clean up toxic sites. To some extent, that is a viable technology and it's a sustainable way of dealing with complex issues. ... We're going to find more examples where [it's going to be much easier to] switch off a gene or an enzyme in a plant, or add some new component. [For instance], if we can just cut down the amount of lignin in the poplar trees that we're growing for paper pulp to make newspapers, [we'll get] less lignin contamination in streams and waterways. Genetically engineered foods: MedlinePlus Medical Encyclopedia. Food and Drug Administration. 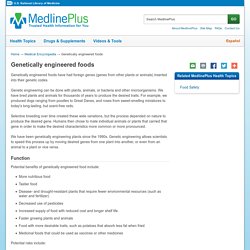 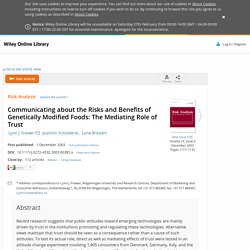 Alternative views maintain that trust should be seen as a consequence rather than a cause of such attitudes. To test its actual role, direct as well as mediating effects of trust were tested in an attitude change experiment involving 1,405 consumers from Denmark, Germany, Italy, and the United Kingdom. After prior attitudes to genetic modification in food production had been assessed, participants received different information materials (either product-specific information or balanced/general information about genetic modification in food production) and were asked to evaluate different types of genetically modified foods (either beer or yoghurt). 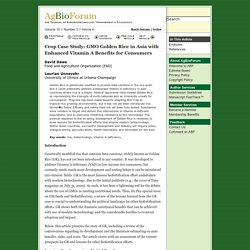 Key words: rice, biotechnology, Vitamin A deficiency. Introduction Genetically modified rice that contains beta-carotene, widely known as Golden Rice (GR), has not yet been introduced in any country. Below, this article presents the story of GR, including a review of the controversies regarding its development and the literature estimating ex-ante benefits, risks, and costs. Impetus, Development, and Initial Reactions. Benefits and risks associated with genetically modified food products. Biotechnology for Sustainable Crop Production and Protection: Challenges and Opportunities.