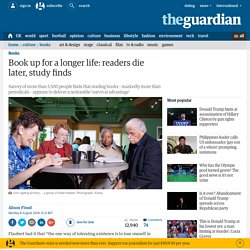 It turns out that reading doesn’t only help us to tolerate existence, but actually prolongs it, after a new study found that people who read books for 30 minutes a day lived longer than those who didn’t read at all. The study, which is published in the September issue of the journal Social Science & Medicine, looked at the reading patterns of 3,635 people who were 50 or older. On average, book readers were found to live for almost two years longer than non-readers. Reading Literary Fiction Improves Theory of Mind. Understanding others’ mental states is a crucial skill that enables the complex social relationships that characterize human societies. 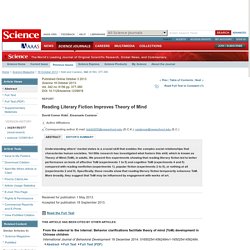 Yet little research has investigated what fosters this skill, which is known as Theory of Mind (ToM), in adults. We present five experiments showing that reading literary fiction led to better performance on tests of affective ToM (experiments 1 to 5) and cognitive ToM (experiments 4 and 5) compared with reading nonfiction (experiments 1), popular fiction (experiments 2 to 5), or nothing at all (experiments 2 and 5). Specifically, these results show that reading literary fiction temporarily enhances ToM. More broadly, they suggest that ToM may be influenced by engagement with works of art. Theory of Mind is the human capacity to comprehend that other people hold beliefs and desires and that these may differ from one's own beliefs and desires.

Reading literary fiction improves empathy, study finds. Have you ever felt that reading a good book makes you better able to connect with your fellow human beings? 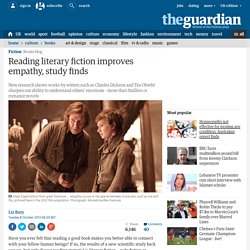 If so, the results of a new scientific study back you up, but only if your reading material is literary fiction – pulp fiction or non-fiction will not do. Psychologists David Comer Kidd and Emanuele Castano, at the New School for Social Research in New York, have proved that reading literary fiction enhances the ability to detect and understand other people's emotions, a crucial skill in navigating complex social relationships. In a series of five experiments, 1,000 participants were randomly assigned texts to read, either extracts of popular fiction such as bestseller Danielle Steel's The Sins of the Mother and Gone Girl by Gillian Flynn, or more literary texts, such as Orange-winner The Tiger's Wife by Téa Obreht, Don DeLillo's "The Runner", from his collection The Angel Esmeralda, or work by Anton Chekhov.

"What great writers do is to turn you into the writer. Vakken - Het domein Literatuur. Subdomein E1: Literaire ontwikkeling 1. 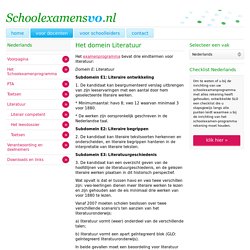 De kandidaat kan beargumenteerd verslag uitbrengen van zijn leeservaringen met een aantal door hem geselecteerde literaire werken. * Minimumaantal: havo 8; vwo 12 waarvan minimaal 3 voor 1880. * De werken zijn oorspronkelijk geschreven in de Nederlandse taal. Objectives for Teaching Literature. Can reading make you smarter? When I was eight years old, I still couldn't read. I remember my teacher Mrs Browning walking over to my desk and asking me to read a few sentences from a Dick and Jane book. She pointed to a word. "Tuh-hee," I said, trying to pronounce it. "The," she said, correcting me, and that's when it clicked – the moment when I learned to read the word "the".

Growing up in Teaneck, New Jersey, in the 1960s, I was what Mrs Browning called "slow". And then, a year later, I was rescued by Spider-Man. By age 11, I was getting straight As. In part to answer that question, I spent three years interviewing psychologists and neuroscientists around the world, reviewing their studies and testing new methods they claim can increase intelligence. That goes for all three meanings of the word "intelligence" widely recognised by psychologists. But all of us know people with little "book knowledge" who are nonetheless sharp and insightful. Reading 'can help reduce stress' Subjects only needed to read, silently, for six minutes to slow down the heart rate and ease tension in the muscles, he found. 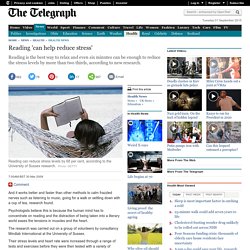 In fact it got subjects to stress levels lower than before they started. Listening to music reduced the levels by 61 per cent, have a cup of tea of coffee lowered them by 54 per cent and taking a walk by 42 per cent. Playing video games brought them down by 21 per cent from their highest level but still left the volunteers with heart rates above their starting point. Dr Lewis, who conducted the test, said: "Losing yourself in a book is the ultimate relaxation. "This is particularly poignant in uncertain economic times when we are all craving a certain amount of escapism. "It really doesn't matter what book you read, by losing yourself in a thoroughly engrossing book you can escape from the worries and stresses of the everyday world and spend a while exploring the domain of the author's imagination.