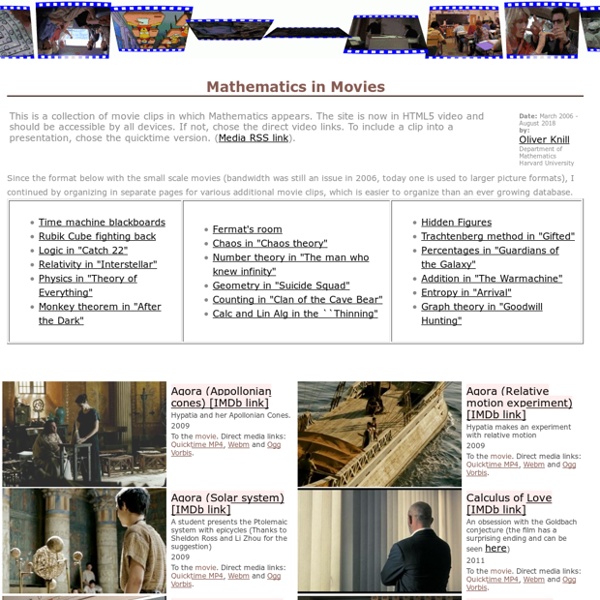 Kill Math makes math more meaningful After a certain point in math education, like some time during high school, the relevance of the concepts to the everyday and the real world seem to fade. However, in many ways, math lets you describe real life better than you can with just words. Designer Bret Victor hopes to make the abstract and conceptual to real and concrete with Kill Math. Kill Math is my umbrella project for techniques that enable people to model and solve meaningful problems of quantity using concrete representations and intuition-guided exploration. In the long term, I hope to develop a widely-usable, insight-generating alternative to symbolic math.

cell phone project Project K-Nect is designed to create a supplemental resource for secondary at-risk students to focus on increasing their math skills through a common and popular technology – mobile smartphones. Ninth graders in several public schools in the State of North Carolina received smartphones to access supplemental math content aligned with their teachers’ lesson plans and course objectives. Students communicate and collaborate with each other and access tutors outside of the school day to help them master math skills and knowledge. The smartphones and service are free of charge to the students and their schools due to a grant provided by Qualcomm, as part of its Wireless Reach™ initiative.

Foldables/Study Guides Lose a foldable? All foldables & study guides that we have made in class are available below. If you need help filling in the blanks, please see the completed foldable or study guide in the classroom. Remember, many of these files were copied back-to-back, so a two-page file is the front and back of the foldable. 6th Grade Adding and Subtracting Fractions and Mixed Numbers (PDF 11 KB)Four-door foldable for operations with fractions. Toolbox for Teaching Climate & Energy Teachers across the country are preparing to teach the science and engineering called for in the new standards designed to address major world challenges and opportunities. Students will face issues, such as generating sufficient clean energy, building climate resilience for businesses and communities, maintaining supplies of food and clean water, and solving the problems of global environmental change that confront society today and in their future. The amount of time teachers are spending on these issues are going up significantly.

History of Fractions Did you know that fractions as we use them today didn't exist in Europe until the 17th century? In fact, at first, fractions weren't even thought of as numbers in their own right at all, just a way of comparing whole numbers with each other. Who first used fractions? Percentage Calculator A percentage is also a way to express the relation between two numbers as a fraction of 100. In other words, the percentage tells us how one number relates to another. If we know that number A is 25% of number B, we know that A to B is like 25 is to 100, or, after one more transformation, like 1 to 4, i.e., A is four times smaller than B. This is what the percentage calculator teaches; what is a percentage and how to find a percentage of two numbers.

VmGhana These are in approximate chronological order of publication starting with Bharati Krsna’s groundbreaking book. Vedic mathematics Or Sixteen Simple Mathematical Formulae from the Vedas. Teaching Evolution through Human Examples The "Teaching Evolution through Human Examples" (TEtHE) three-year exploratory research and development project was funded by National Science Foundation Discovery Research K-12 grant #1119468. The project has created four curriculum units for Advanced Placement (AP) Biology classes, aligned to the learning objectives, using human case studies to teach core evolutionary principles. The curriculum units are: (1) Adaptation to Altitude, (2) Malaria, (3) Evolution of Human Skin Color, and (4) What Does It Mean To Be Human?. Algebra Meltdown Game Goals In this maths game you have been recruited by Lissaman Industries to assist in one of their super-secret, ultra-dangerous research projects. As the new controller of the mighty Nuclear Generator, your job is to serve scientists waiting at the Generator's outlets. Each scientist needs a certain atom, which you create by solving linear equations and then guiding 'raw' atoms through the Generator's maze of machines and tubes. Be quick: the scientists are impatient to continue their work.

A collection of movie clips in which Mathematics appears. by nda_librarian Apr 30