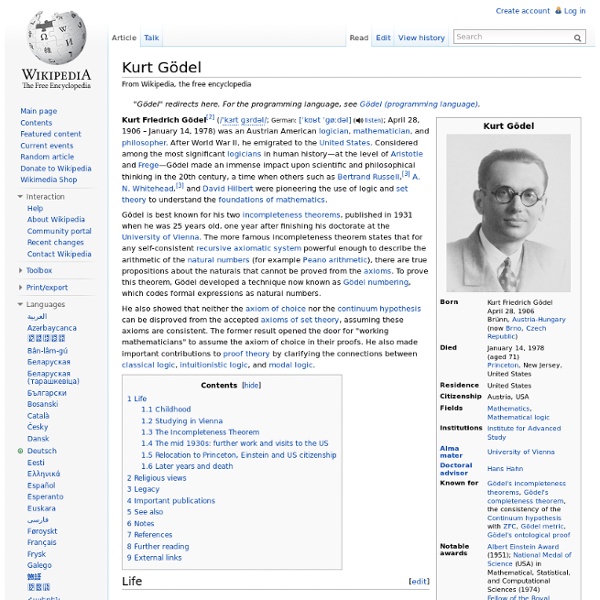 Kurt Friedrich Gödel (/ˈkɜrt ɡɜrdəl/; German: [ˈkʊʁt ˈɡøːdəl] ( ); April 28, 1906 – January 14, 1978) was an Austrian, and later American, logician, mathematician, and philosopher. Considered with Aristotle and Gottlob Frege to be one of the most significant logicians in history, Gödel made an immense impact upon scientific and philosophical thinking in the 20th century, a time when others such as Bertrand Russell,[1] A. N. Whitehead,[1] and David Hilbert were pioneering the use of logic and set theory to understand the foundations of mathematics. Gödel published his two incompleteness theorems in 1931 when he was 25 years old, one year after finishing his doctorate at the University of Vienna. He also showed that neither the axiom of choice nor the continuum hypothesis can be disproved from the accepted axioms of set theory, assuming these axioms are consistent. Life[edit] Childhood[edit] In his family, young Kurt was known as Herr Warum ("Mr. Studying in Vienna[edit]

One Hundred Interesting Mathematical Calculations, Number 9: Archive Entry From Brad DeLong's Webjournal One Hundred Interesting Mathematical Calculations, Number 9 One Hundred Interesting Mathematical Calculations, Number 9: False Positives Suppose that we have a test for a disease that is 98% accurate: if one has the disease, the test comes back "yes" 98% of the time (and "no" 2% of the time), and if one does not have the disease, the test comes back "no" 98% of the time (and "yes" 2% of the time). Suppose further that 0.5% of people--one out of every two hundred--actually has the disease. Your test comes back "yes." Suppose just for ease of calculation that we have a population of 10000, of whom 50--one in every two hundred--have the disease. If you test "no" you can be very happy indeed: there is only one chance in 9752 that you are the unlucky guy who had the disease and yet tested negative. If you test "yes" you are less happy. From John Allen Paulos's Innumeracy .

Gödel numbering A Gödel numbering can be interpreted as an encoding in which a number is assigned to each symbol of a mathematical notation, after which a sequence of natural numbers can then represent a sequence of symbols. These sequences of natural numbers can again be represented by single natural numbers, facilitating their manipulation in formal theories of arithmetic. Since the publishing of Gödel's paper in 1931, the term "Gödel numbering" or "Gödel code" has been used to refer to more general assignments of natural numbers to mathematical objects. Simplified overview[edit] Gödel noted that statements within a system can be represented by natural numbers. In simple terms, we devise a method by which every formula or statement that can be formulated in our system gets a unique number, in such a way that we can mechanically convert back and forth between formulas and Gödel numbers. Gödel's encoding[edit] Gödel used a system based on prime factorization. Example[edit] Lack of uniqueness[edit]

Bertrand Russell Russell led the British "revolt against idealism" in the early 20th century.[58] He is considered one of the founders of analytic philosophy along with his predecessor Gottlob Frege, colleague G. E. Moore, and his protégé Ludwig Wittgenstein. He is widely held to be one of the 20th century's premier logicians.[55] With A. Russell was a prominent anti-war activist; he championed anti-imperialism[60][61] and went to prison for his pacifism during World War I.[62] Later, he campaigned against Adolf Hitler, then criticised Stalinist totalitarianism, attacked the involvement of the United States in the Vietnam War, and was an outspoken proponent of nuclear disarmament.[63] In 1950 Russell was awarded the Nobel Prize in Literature "in recognition of his varied and significant writings in which he champions humanitarian ideals and freedom of thought Biography Early life and background Young Bertrand Russell Childhood and adolescence University and first marriage Early career Russell in 1907.

FIBONACCI "...considering both the originality and power of his methods, and the importance of his results, we are abundantly justified in ranking Leonardo of Pisa as the greatest genius in the field of number theory who appeared between the time of Diophantus [4th century A.D.] and that of Fermat" [17th century] R.B. McClenon [13]. [Numbers in square brackets refer to REFERENCES at the end of this article.] 1. During the twelfth and thirteenth centuries, many far-reaching changes in the social, political and intellectual lives of people and nations were taking place. By the end of the twelfth century, the struggle between the Papacy and the Holy Roman Empire had left many Italian cities independent republics. Among these important and remarkable republics was the small but powerful walled city-state of Pisa which played a major role in the commercial revolution which was transforming Europe. Pisa today is best known for its leaning tower (inclined at an angle of about 161/2o to the vertical).

Spirasolaris Rudolf Carnap Rudolf Carnap (May 18, 1891 – September 14, 1970) was a German-born philosopher who was active in Europe before 1935 and in the United States thereafter. He was a major member of the Vienna Circle and an advocate of logical positivism. Life and work[edit] Carnap's Birthplace in Wuppertal Carnap's father had risen from the status of a poor ribbon-weaver to become the owner of a ribbon-making factory. In 1928, Carnap published two important books: The Logical Structure of the World (German: "Der logische Aufbau der Welt"), in which he developed a rigorous formal version of empiricism, defining all scientific terms in phenomenalistic terms. In February 1930 Tarski lectured in Vienna, and during November 1930 Carnap visited Warsaw. Carnap, whose socialist and pacifist beliefs put him at risk in Nazi Germany, emigrated to the United States in 1935 and became a naturalized citizen in 1941. Carnap taught himself Esperanto when he was 14 years of age, and remained sympathetic to it (Carnap 1963).

Eliminative materialism Eliminativists argue that modern belief in the existence of mental phenomena is analogous to the ancient belief in obsolete theories such as the geocentric model of the universe. Eliminativism stands in opposition to reductive materialism, which argues that a mental state is well defined, and that further research will result in a more detailed, but not different understanding.[3] An intermediate position is revisionary materialism, which will often argue that the mental state in question will prove to be somewhat reducible to physical phenomena - with some changes to the common sense concept. Eliminativism about a class of entities is the view that that class of entities does not exist.[4] For example, all forms of materialism are eliminativist about the soul; modern chemists are eliminativist about phlogiston; and modern physicists are eliminativist about the existence of luminiferous aether. Overview[edit] Philosophers who argue against eliminativism may take several approaches.

Sacred geometry As worldview and cosmology[edit] The belief that God created the universe according to a geometric plan has ancient origins. Plutarch attributed the belief to Plato, writing that "Plato said God geometrizes continually" (Convivialium disputationum, liber 8,2). In modern times the mathematician Carl Friedrich Gauss adapted this quote, saying "God arithmetizes".[2] At least as late as Johannes Kepler (1571–1630), a belief in the geometric underpinnings of the cosmos persisted among scientists. Closeup of inner section of the Kepler's Platonic solid model of planetary spacing in the Solar system from Mysterium Cosmographicum (1596) which ultimately proved to be inaccurate Natural forms[edit] Art and architecture[edit] Geometric ratios, and geometric figures were often employed in the design of Egyptian, ancient Indian, Greek and Roman architecture. In Hinduism[edit] Unanchored geometry[edit] Music[edit] See also[edit] Notes[edit] Further reading[edit] External links[edit] Sacred geometry at DMOZ

Paul Churchland Paul Churchland (born October 21, 1942) is a Canadian philosopher noted for his studies in neurophilosophy and the philosophy of mind.[1] He is Professor Emeritus at the University of California, San Diego, where he held the Valtz Chair of Philosophy[2] and a joint appointment with the Cognitive Science Faculty and the Institute for Neural Computation.[3] He earned his Ph.D. from the University of Pittsburgh in 1969 under the direction of Wilfrid Sellars.[4] Churchland is the husband of philosopher Patricia Churchland. He is also the father of two children, Mark and Anne Churchland, both of whom are neuroscientists.[5][6][7] Professional career[edit] Philosophical views[edit] Just as modern science has discarded such notions as legends or witchcraft, Churchland holds the belief that a future, fully matured neuroscience is likely to have no need for "beliefs" (see propositional attitudes). Works[edit] Books[edit] Essays[edit] See also[edit] References[edit] External links[edit]