A collection of over 1000 short stories about mathematics -> 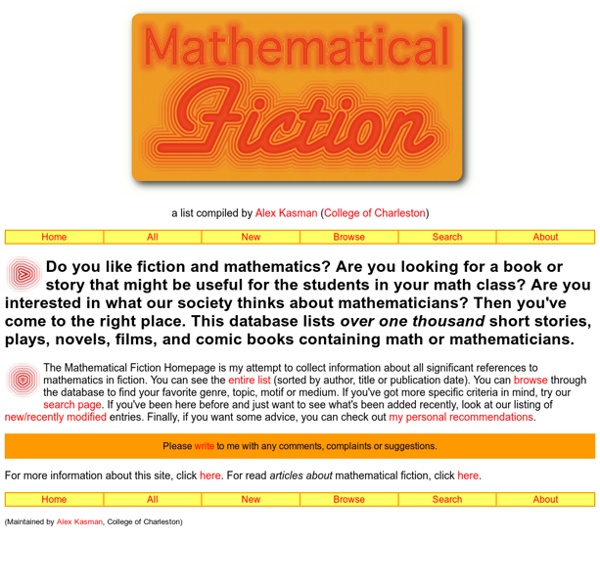 a list compiled by Alex Kasman (College of Charleston) The Mathematical Fiction Homepage is my attempt to collect information about all significant references to mathematics in fiction. You can see the entire list (sorted by author, title or publication date). You can browse through the database to find your favorite genre, topic, motif or medium. If you've got more specific criteria in mind, try our search page. For more information about this site, click here. (Maintained by Alex Kasman, College of Charleston)

In Mathematics, Mistakes Aren’t What They Used To Be: Computers are changing the way proofs are done Vladimir Voevodsky had no sooner sat himself down at the sparkling table, set for a dinner party at the illustrious Institute for Advanced Study in Princeton, New Jersey, than he overturned his empty wine glass, flipping bowl over stem and standing the glass on its rim—a signal to waiters that he would not be imbibing. He is not always so abstemious, but Voevodsky, that fall of 2013, was in the midst of some serious work. Founded in 1930, the Institute has been called “the earthly temple of mathematical and theoretical physics,” and is a hub for all manner of rigorous intellectual inquiry. Einstein’s old house is around the corner. In the parking lot a car sports a nerdy bumper sticker reading, “Don’t Believe Everything You Think”—which might very well be aimed directly at Voevodsky. On the weight of Kapranov’s recommendation, Voevodsky found himself accepted for graduate studies at Harvard, without even having applied. But along the way he met a bump in the road. “It is plainly wrong.

Ciao a tutti sono Mary. Goodbye P value: is it time to let go of one of science's most fundamental measures? Ahem, @PaulSMattson How should scientists interpret their data? Emerging from their labs after days, weeks, months, even years spent measuring and recording, how do researchers draw conclusions about the results of their experiments? Statistical methods are widely used but our recent research in Nature Methods reveals that one of the classic science statistics, the P value, may not be as reliable as we like to think. Scientists like numbers, because they can be compared with other numbers. And often these comparisons are made with statistical analyses, to formalise the process. Which drug is more effective? Scientists often conduct experiments to investigate whether there is a difference between two conditions: do people get better more quickly after taking the blue pill (condition one) or the red pill (condition two)? To assess experimental results, scientists very often use a “P value” (P is for probability). P values are fickle friends So why is the P value so variable, so fickle? Moving on

The Course Hath No Bottom: the 20,000-Person Seminar A few years ago, Sean Michael Morris and I wrote, “Meaningful relationships are as important in a class of three as they are in a class of 10,000.” In the rest of that article, we wonder at questions of scale: how to scale up, when to scale down, and what it might mean to scale sideways. My question here: is it possible to scale up and down simultaneously — to create more and more intimate learning experiences for larger and larger groups of learners? I’m currently co-teaching Shakespeare in Community, a Massive Open Online Course from University of Wisconsin-Madison. However, I remain certain that learning is not something that ought to be managed. If we are to use these systems, we need to carve out more space in them for nuance — fashioning simpler platforms that serve as launching pads to places outside their own orbit (both physical and virtual). The MOOC’s the Thing At this point, every MOOC fails if it isn’t, at least implicitly, about how we learn in a MOOC.