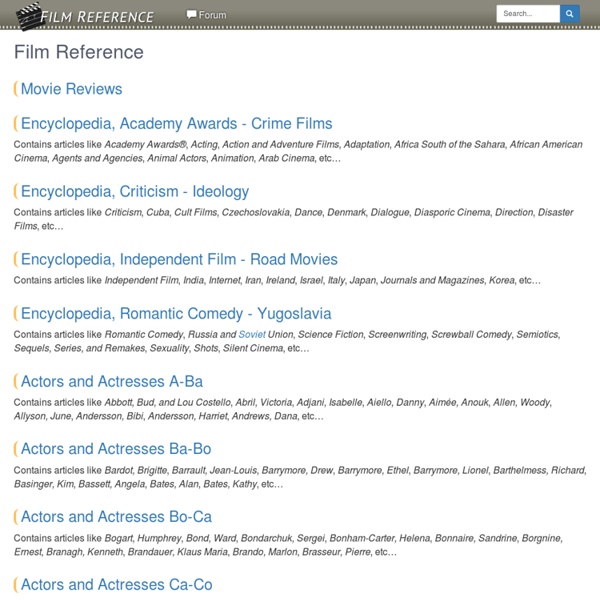 The untold truth of Jackie Chan After starring in dozens of martial arts and action movies in which he's done his own stunts, Chan has sustained a number of injuries. So much so that in 2013, his movie Raising Dragon was promoted with a poster that consisted of an image of Chan's body with arrows pointing to all of his injured body parts. Among the injuries Chan has suffered in the pursuit of art and entertainment: On Drunken Master, he damaged a bone behind his eyebrow, and it nearly blinded him. He dislocated his right shoulder on City Hunter. Chan fell out of a tree while filming The Armour of God and suffered a skull fracture, a bone cave-in behind the ear, and bleeding into his brain. Reality Checks: Four Major Documentary Filmmakers Have Died This Year. These Are Their Legacies. By Anthony Kaufman | Indiewire May 29, 2014 at 10:51AM It always sucks when someone dies. But in the small world of documentary filmmaking, where the directors are a close-knit, dogged group, the loss of a fellow intrepid traveler is like losing a member of your extended family.

Movie scenes that nearly killed Jackie Chan The period piece Project A, in which Hong Kong police team up with the Coast Guard to fight pirates at the turn of the 20th century, is one of the first truly successful distillations of the Jackie Chan formula—pure slapstick comedy by way of blinding martial arts and insane stunt work. One of the most dangerous things Chan ever did on film appears not in the outtakes, but in the finished movie—and it may have been the first scene to give audiences the notion that Chan may be superhuman, because it just doesn't seem like something anyone should be able to live through. In the scene, Chan's character Ma dangles precariously from the face of a 60-foot clock tower. He strains to hold on, but loses his grip—and falls the entire six stories, through a couple of awnings and directly onto his head.

87 Deeply Subversive Documentaries That Challenge the Status Quo By Films For Action / filmsforaction.org/ Jul 19, 2017 Now that there are thousands of films on Films For Action, we realized the very best gems have really become buried all across our library, and for people new to this information, we needed a more guided way to dive in. Spread across 15 core themes, this collection aims to be that entry point. It is our attempt to curate the kind of crash-course curriculum on the state of the world we wish we had all got growing up, especially during high school and college, but didn't. Sadly, you are not likely to see these documentaries in school, broadcast on television, or available on Netflix.

The Walt Disney Company The Walt Disney Company, also known simply as Disney, is an American media and entertainment conglomerate, founded in 1923 by brothers Walt Disney and Roy Disney. [edit] J.R.R. Tolkien about Disney Throughout his life, J.R.R. Tolkien had a deep concern and strong opinions about adaptations of his legendarium. For Tolkien, the products of the Disney company were an especially prominent example of bad style. Jackie Chan awarded with two new Guinness World Records titles Action film legend Jackie Chan has today been presented with two Guinness World Records certificates during an event in Shanghai. GWR Greater China President Rowan Simons made the presentations for Most credits in one movie and Most stunts by a living actor to the star during the official launch of Chan's latest movie Chinese Zodiak. Chan carried out 15 of the major creative movie-making roles for the film, including Director, Producer, Actor, Fight Choreographer and Composer, breaking the previous record of 11 credits held by Robert Rodriguez. Speaking about the achievement, Chan said, "Achieving these Guinness World Records titles is recognition of all my life's work". The highlight of the event was the presentation of a second Guinness World Records title for Most stunts by a living actor, an accomplishment that reflects Chan's amazing career in which he has nearly lost his life several times and broken numerous bones.

Oscars: 23 Great Actors Who Still Don't Have a Nomination [Note: This article was initially published at a prior date, but has been bumped up due to the relevancy of the 90th Academy Awards Nominations. Happily, we were able to remove Sam Rockwell and Allison Janney from the list.] Every year around Oscar time you’ll see the familiar lists of actors who still haven’t won their first Academy Award. From Don't Look Now to The Godfather – why the 1970s is my favourite film decade First, the bad news. The 1970s found Hitchcock and Lean waning, Michael Powell a pariah and Pasolini beaten to death. Disaster movies were falling from the skies. Jaws and Star Wars gave birth to the modern blockbuster, bestowing undue weight for ever on the words “opening weekend”.

From Top Gun to Stand By Me – why the 1980s is my favourite film decade I’m such a raging narcissist (or sociopath) that I generally assume my taste is the same as everyone else’s. How can people possibly think differently from me? Obviously everyone prefers Albert Finney’s Poirot to David Suchet’s Poirot, Blur to Oasis, hard cheese to soft cheese, Anchorman to Knocked Up, 80s goofball Tom Hanks to 90s Oscar winner Tom Hanks, right? Right? So when I was asked to write about my favourite decade for films I sighed and said, “Well, I guess the 80s have already been taken, right?”