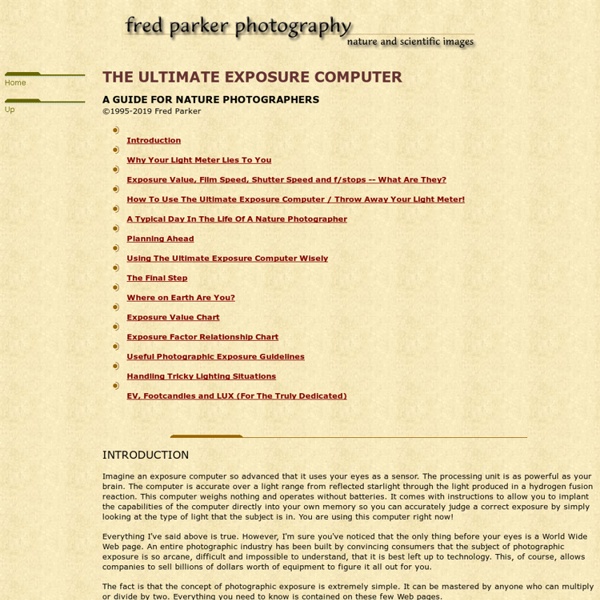 Imagine an exposure computer so advanced that it uses your eyes as a sensor. The processing unit is as powerful as your brain. The computer is accurate over a light range from reflected starlight through the light produced in a hydrogen fusion reaction. Everything I've said above is true. The fact is that the concept of photographic exposure is extremely simple. Knowledge of photographic exposure is essential to controlling the creative side of the photographic process. But first, a word about copyright. WHY YOUR LIGHT METER LIES TO YOULight meters can be less accurate than you might imagine. How do you compensate for the fact that your meter is lying? You can tell this white (or black) lie to your meter in a couple of ways. Another way to get the right exposure from a lying meter is to politely ignore it. So it goes. There is a chance that the preceding section may have confused you. Exposure Value, Each of these four factors is represented by a series of numbers. Exposure Value: Easy! Related:  Film.

sidewalk chalk guy sidewalk chalk guy «« back to gprime.net all material copyrighted by its original creator | An Introduction to Shooting Street Photography With Film For the last year and a half or so, I have been shooting my personal street photography on exclusively film. After shooting digital for around 7 years or so, it has been a great experience so far and I have learned a ton. When I first wanted to start shooting street photography I had a lot of fears. What if the photos don’t turn out? I am certainly not an expert when it comes to shooting film, but I wanted to write this article as a primer for those of you who want to get your feet wet (but may not know where to start). Why Shoot Film? My film Leica MP I have been shooting with the last year and a half I have been shooting film the last year and a half or so, and it has definitely helped me become a better photographer. Some benefits I have found shooting film: It has helped me be more conscious when shootingIt helped me slow down (I shoot a lot less in film compared to digital)It helped me be more discerning when deciding to take a photo (is it really worth it?) The dark truth Bulk-loading

10 Easy Strat Mods to Improve Primary Tone This month we will start with a new series about the most demanded modifications on electric guitars. We receive a lot of emails about this subject, so we made a list of the most demanded mods. I decided to divide this series into three chapters: Stratocaster, Telecaster and Les Paul type guitars. You can transfer most of this mods to any similar guitar -- eg. the typical Les Paul configuration (two humbuckers with two volume and two tone controls) is the same as in a typical SG, 335, etc. We will start with the Stratocaster, which is a perfect guitar for a lot of mods and hot-rodding things. Before we heat up the soldering iron, it''s time to think about some physical things and how to enhance the primary tone of your Stratocaster. So it''s time to face, that the classification "good" or "bad" on electric guitars normally means "good" or "bad" primary tone abilities. 1. 2. 4. Also, The bottom and sides of the neck cavity should be absolutely plain and free of any paint. 5. 6. 7. 8. 9.

Short and sweet OP centric lessons - Education 'danylyon', on 25 Feb 2013 - 6:10 PM, said: What I'd love to see more, as somebody who swichted from another app (not a "newbie").. is an indepth explenation of how houdini works "under the hood". There's bits and pieces everywhere.. but most Tutorials center around an effect they want to achief. There is no mystery as to how Houdini works. Anything that gets done in Houdini can be expressed by a node. Whether that node is a coded c++ operator, an operator written in VEX (or using VOP nodes representing vex functions), Python operators or Houdini Digital Assets (HDA's), each node does it's own bit and then caches it's result. The nodes in Houdini are the lowest level atomic routine/function/programme. You can set a few options in the Performance Monitor to work in the older H11 way and see this evaluation tree order if you wish. Another key is to use the MiddleMouseButton (MMB) on any and all nodes to see what they have cached from the last cook evaluation. Quote Let's stick to SOPs.

Digital Photography Tips: Digital Photography School Carmencita Film Lab | How Exposure Affects Film OK, so for a while we’ve been wanting to explain a couple of film technicalities that we’re pretty sure will change many people’s understanding of film and exposure. Alright, take a deep breath ‘cause this stuff is easy but sometimes difficult to explain in written communication. So the thing is that exposure on film (unlike in digital photography) is not equivalent at all to overall brightness of an image. For example, in the digital photography world when someone speaks of an overexposed image you instantly imagine a bright, all-white image with (probably) clipped highlights. Color film’s latitude is huge. Here’s the full spectrum of the 13 stops of the test Now zooming in on the Overexposure side And finally the Underexposure side of the test. We did the same thing for these shots of our colleague Gloria , but this time in a totally different light situation and on Kodak Portra 400 film. What conclusions can be made from this test? Well… first of all… 6 stops overexposed?

MIDI File Format Standard MIDI files provide a common file format used by most musical software and hardware devices to store song information including the title, track names, and most importantly what instruments to use and the sequence of musical events, such as notes and instrument control information needed to play back the song. This standardization allows one software package to create and save files that can later be loaded and edited by another completely different program, even on a different type of computer. Almost every software music sequencer is capable of loading and saving standard MIDI files. All data values are stored in Big-Endian (most significant byte first) format. Also, many values are stored in a variable-length format which may use one or more bytes per value. Example values and their variable-length equivalents. A variable-length value may use a maximum of 4 bytes. MIDI files are organized into data chunks (similar to RIFF files). MIDI Header Chunk Format MIDI Track Chunk Format