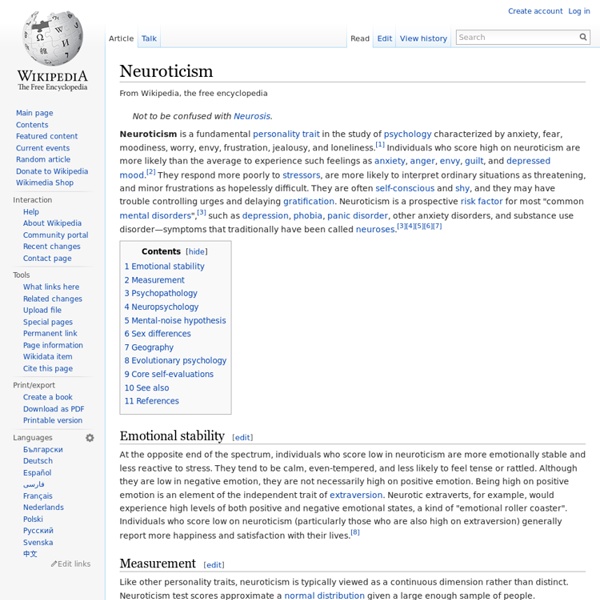 Emotional stability[edit] At the opposite end of the spectrum, individuals who score low in neuroticism are more emotionally stable and less reactive to stress. They tend to be calm, even-tempered, and less likely to feel tense or rattled. Although they are low in negative emotion, they are not necessarily high on positive emotion. Being high on positive emotion is an element of the independent trait of extraversion. Neurotic extraverts, for example, would experience high levels of both positive and negative emotional states, a kind of "emotional roller coaster". Measurement[edit] Like other personality traits, neuroticism is typically viewed as a continuous dimension rather than distinct. Extent of neuroticism is generally assessed using self-report measures, although peer-reports and third-party observation can also be used. Statement measures tend to comprise more words, and hence consume more research instrument space, than lexical measures. Psychopathology[edit] Neuropsychology[edit]

Personality Types New Content The Primary Passions [05.15.03] Long & Sedley (pp. 410-11) translate Strobaeus [speaking for the Stoics]: "[O]ne must suppose that some passions are primary and dominant, while others have these as their reference. The generically primary ones are these four: appetite, fear, distress, pleasure. (4) Appetite and fear come first, the former in relation to what appears good, and the latter in relation to what appears bad. Ludwig Wittgenstein: Inventive personality type [03.10.03] "In fact, his life might be said to have been dominated by a moral struggle - the struggle to be anst‰ndig (decent), which for him meant, above all, overcoming the temptations presented by his pride and vanity to be dishonest." Cicero on Temperament [01.12.03] "The whole essence of propriety is quite certainly consistency, both in life as a whole and in individual actions, and you cannot secure this if you imitate other people's nature and overlook your own . . . A Mind Map of Stoicism [12.23.02] Keith H.

Mental Health: Hallucinations to Delusions | Self Help Zone : Self Help Zone Mental health is tricky since there are many types of diagnosis, together with personality disorders, cognitive disorder, mental diseases and so forth. To understand mental health entirely is nearly impossible, but there are many answers to questions that many have, because all of us directly or indirectly are affected by mental illnesses. Hallucinations Some disorders, diseases, or cognitive impairments may cause a person to hallucinate or become delusional. Obsessive-compulsive behaviors, anorexia, phobias of socializing, hypochondrias and so forth are the most severe symptoms in this disorder. Some researchers consider that anxiety disorder is a straight link to hereditary, while other philosophers will dispute this notion. Since the person is somewhat disconnected with realism, once the person is affected with anxiety, other symptoms often following simply. For many men in the world social phobias are also common, but have also affected children and women.

APA Research Style Crib Sheet APA Research Style Crib Sheetby Russ DeweyGeorgia Southern University Psychology Department [Emeritus] [This page is a summary of rules for using APA style, updated for the 6th edition. I have made every effort to keep this document accurate, but readers have occasionally pointed out errors and inconsistencies which required correction. I am grateful to them and invite additional feedback to me at psywww@gmail.com. This document may be reproduced freely if this paragraph is included. --Russ Dewey, host of Psych Web [psywww.com]] APA Crib Sheet ContentsContents | Back to top APA style is the style of writing used by journals published by the American Psychological Association (APA). Some of the more commonly used rules and reference formats from the manual are listed here. The most notable additions and changes to sixth edition of the APA Manual (2001) include: Contents | Back to top Following is a summary of rules and reference examples in the APA style manual. Contents | Back to top Commas

Boundaries and Dysfunctional Family Systems - Psychotherapy Treatment And Psychotherapist Information Mark Dombeck, Ph.D. Updated: Aug 1st 2006 "I let my neighbor know beyond the hill; And on a day we meet to walk the line And set the wall between us once again." - from "Mending Wall" by Robert Frost Another month, and another essay. Family Systems practitioners are the ecologists in my scheme for describing the various schools (Philosophers, Engineers, Ecologists and Gnostics: Four Approaches to Psychotherapy). Though individual clinicians have grasped the intrinsically social and ecological nature of identity since the early days of therapy (e.g., Freud's idea of Transference, and contributions of lesser known but nevertheless important psychodynamic clinicians such as Harry Stack Sullivan), it was not until the 1950s and 60s that an organized and fully ecological vision of psychotherapy took shape in the form of what is today called Family Systems theory. A boundary is a barrier; something that separates two things. Social groups of any size are seldom uniform things. Hi,