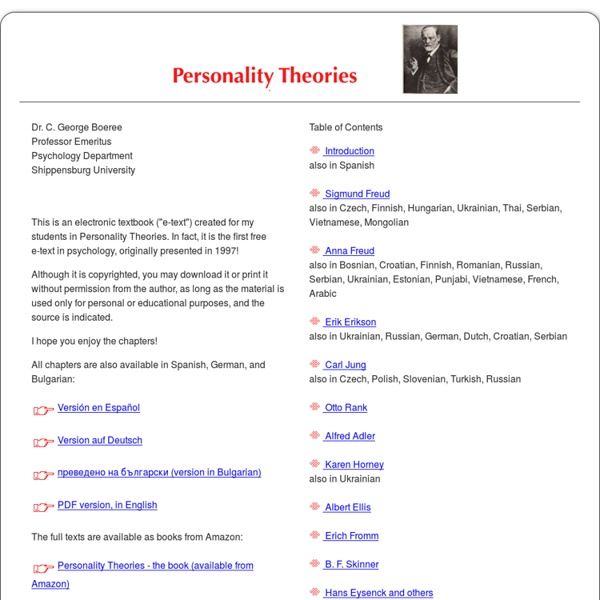 The Stanford Prison Experiment: A Simulati Volunteers What suspects had done was to answer a local newspaper ad calling for volunteers in a study of the psychological effects of prison life. We wanted to see what the psychological effects were of becoming a prisoner or prison guard. To do this, we decided to set up a simulated prison and then carefully note the effects of this institution on the behavior of all those within its walls. More than 70 applicants answered our ad and were given diagnostic interviews and personality tests to eliminate candidates with psychological problems, medical disabilities, or a history of crime or drug abuse. Our study of prison life began, then, with an average group of healthy, intelligent, middle-class males.

28 Dignified Ways to Impress Everyone Around You post written by: Marc Chernoff Email Far more often than any of us like to admit, our actions are driven by an inner desire to impress other people. This desire is often reflected in the brand name products we use, the bars and restaurants we frequent, the houses and cars we buy and the careers we choose. But are name brand products, fancy bars, houses and cars really that impressive? Why? Consider the following questions: He drives a Porsche, but can he truly afford the car payment? You get the idea. Now take a moment and imagine a person who loves what he does for a living, smiles frequently and bleeds passion in every breath he takes. Here are 28 dignified ways to impress everyone around you. We make a living by what we get. Be authentic. Of course, the coolest thing about this list is that everything you need to impress everyone around you is already contained within you. Photo by: Khalid If you enjoyed this article, check out our new best-selling book.

50 Life Secrets and Tips Memorize something everyday.Not only will this leave your brain sharp and your memory functioning, you will also have a huge library of quotes to bust out at any moment. Poetry, sayings and philosophies are your best options.Constantly try to reduce your attachment to possessions.Those who are heavy-set with material desires will have a lot of trouble when their things are taken away from them or lost. Possessions do end up owning you, not the other way around. Become a person of minimal needs and you will be much more content.Develop an endless curiosity about this world.Become an explorer and view the world as your jungle. Stop and observe all of the little things as completely unique events. Try new things. Read “Zen and the Art of Happiness” by Chris Prentiss.This book will give you the knowledge and instruction to be happy at all times regardless of the circumstances.

&quot;This Is Your Brain on Music&quot; | Salon Book If you happened to have been born between about 1978 and 1981, there’s a fair chance you count yourself an obsessive of the Southern California rock band Weezer. The affection would not make sense to those even just a bit older or younger, who might regard Weezer’s guitar pop as clever and pleasing but also somewhat too shallow to have much lasting significance. Those of a certain age, though, experienced the group’s 1994 eponymous debut release, known to fans as the Blue Album, as a thing of precise and overflowing emotion — 10 tracks that functioned like keys to secret locks in the teenage brain, opening up all the awkwardness and anxiousness of those melodramatic high school years. We all have music like this, music that burns into the soul when we’re young and remains essential for the rest of time. For me it was the Blue Album and anything the Smashing Pumpkins did up until about 1998. Levitin is a neuroscientist and a former record producer.

Determining Your Entrepreneur Style and Getting Past Your Business Blind Spots Reader Resource Join us Dec 20. for our free webinar on attracting top talent, fueling productivity and building a brag-worthy culture. Register Now » Entrepreneurs are leaders who can see into the future with inspired vision, championing highly competent teams to make the seemingly impossible possible. That is the intent at least. There are times when you may feel overwhelmed, work harder instead of smarter and generally fear that you’re doing it wrong. Understanding and acknowledging your blind spots is the quickest way to transcend them and start seeing success. You can identify your brain type by determining what motivates you, what fears rule you and which information you naturally seek. Related: The Untouchable Asset That Everybody Strives For 1. 2. 3. 4. These brain types classify how we think and make decisions. Related: Here's How to Foster Leadership on All Levels How to see success: Related: Leading Your Team Down the Path of Change in 4 Steps Michael O.

Alternative Sleep Cycles: You Don't Really Need 6-8 Hours! Most people only think that there is one way to sleep: Go to sleep at night for 6-8 hours, wake up in the morning, stay awake for 16-18 hours and then repeat. Actually, that is called a monophasic sleep cycle, which is only 1 of 5 major sleep cycles that have been used successfully throughout history. The other 4 are considered polyphasic sleep cycles due to the multiple number of naps they require each day. How is this possible? How is this healthy? Well the most important of every sleep cycle is the Stage 4 REM (Rapid Eye Movement) sleep, which has been shown to provide the benefits of sleep to the brain above all other stages of sleep. This way, you still get the benefits of 8 hours of sleep without wasting all of the time it takes to get to REM cycles, resulting in a much more efficient sleep cycle. Uberman Cycle: 20 to 30 minute naps every 4 hours, resulting in 6 naps each day. Everyman Cycle: One longer “core” nap that is supplemented with several 20-30 minute naps. Dymaxion Cycle:

Sexual Success And The Schizoid Factor 28 April 2006 By Rusty Rockets Ever wondered why uncouth, scruffy rock musicians are pursued by legions of doting, lovelorn female fans? Like Richard Dawkins, Daniel Dennett and Stephen Pinker, evolutionary psychologist Geoffrey Miller considers sexual selection to be right up there in importance with natural selection. Neuroscientist V. Despite what seems to be logically valid reasoning, Ramachandran stresses that the talents and specializations associated with the savant are not enough. But if creative juices are responsible for an evolutionary advantage, there must surely be some aspect of this seemingly ineffable trait that can be identified as heritable. After conducting their own study, researchers Daniel Nettle and Helen Clegg believe that they have confirmed Miller's assertions, and in doing so have solved a long standing mystery. Unusual experiences Contains items referring to perceptual and cognitive aberrations and magical thinking. One recent study illustrates this point.

10 Psychological Studies That Will Change What You Think You Know About Yourself Why do we do the things we do? Despite our best attempts to "know thyself," the truth is that we often know astonishingly little about our own minds, and even less about the way others think. As Charles Dickens once put it, “A wonderful fact to reflect upon, that every human creature is constituted to be that profound secret and mystery to every other.” Psychologists have long sought insights into how we perceive the world and what motivates our behavior, and they've made enormous strides in lifting that veil of mystery. We all have some capacity for evil. Arguably the most famous experiment in the history of psychology, the 1971 Stanford prison study put a microscope on how social situations can affect human behavior. The experiment, which was scheduled to last for two weeks, had to be cut short after just six days due to the guards' abusive behavior -- in some cases they even inflicted psychological torture -- and the extreme emotional stress and anxiety exhibited by the prisoners.

How Your Beliefs Create Your Reality part 2 Understanding that the mind is only creative can help us grasp the power of beliefs. George Orwell once said that “myths which are believed in tend to become true.” This is especially true on an individual basis. By now, most of us realize that our perception of reality is heavily influenced by our beliefs, but the full extent of this influence is often underestimated. Editors note: This is the second in a five part series of articles aboutHow Your Beliefs Create Your Reality. In part one of this series we talked about how our beliefs provide a structured process through which we evaluate everything in our lives. Part 2: Your Internal Map of Reality From the moment you entered this life, your subconscious mind has been busy collecting and processing information. Because these beliefs are based on your evaluation, and emotional conclusions of your personal experiences, they are accepted by your subconscious as being absolutely true. To the mind, your map is reality! Here’s the catch.

Your True Self Revealed - F You are a Considerate Analyst. personalDNA about you You are an Analyst If you want to be different: how you relate to others You are Considerate Your Personal DNA Maps Here are personalDNA maps that uniquely represent your personality. Considerate Analyst To add this map to your website or blog, copy/paste this HTML into the body of a blog post or web page: Your Personality Chart »Glossary of Traits This chart shows thirteen personality traits.