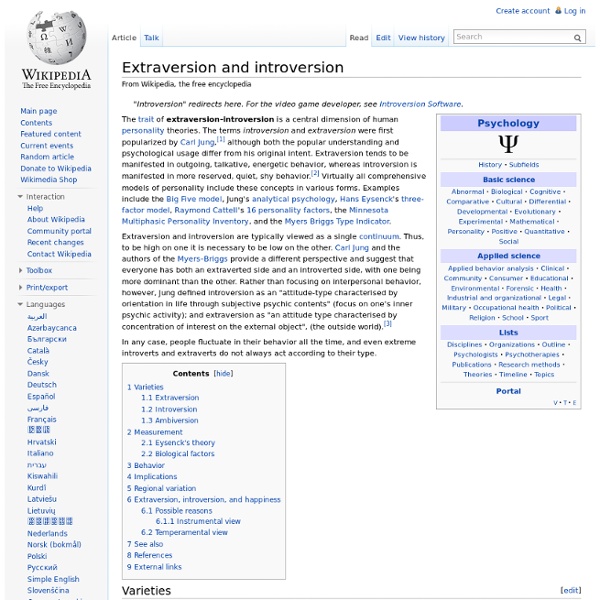 The trait of extraversion–introversion is a central dimension of human personality theories. The terms introversion and extraversion were first popularized by Carl Jung,[1] Although both the popular understanding and psychological age differ from his original intent. Extraversion tends to be manifested in outgoing, talkative, energetic behavior, whereas introversion is manifested in more reserved and solitary behavior.[2] Virtually all comprehensive models of personality include these concepts in various forms. Examples include the Big Five model, Jung's analytical psychology, Hans Eysenck's three-factor model, Raymond Cattell's 16 personality factors, the Minnesota Multiphasic Personality Inventory, and the Myers–Briggs Type Indicator. In any case, people fluctuate in their behavior all the time, and even extreme introverts and extroverts do not always act according to their type. Varieties[edit] Extraversion[edit] Introversion[edit] Ambiversion[edit] Measurement[edit] Eysenck's theory[edit] Related:  Introvert & Extrovert

Social Nourishment + Restorative Solitude = Human Thriving Source: Pixabay Humans thrive on a smorgasbord of "social nutrition" that includes both restorative alone time and meaningful social interactions, according to a new study. The more choice people have about the social diet, the better they do. The findings (Hall & Merolla, 2019) were published on December 6 in the journal Human Communication Research. Jeffrey Hall of the University of Kansas and Andy Merolla of UC Santa Barbara are the co-authors of this study. article continues after advertisement Almost 400 people participated in this diary-based study. "Your social biome can be thought of as homeostatic social system," Hall said in a news release. Most people's "social biome" includes hanging out with friends or family, casual small talk with random strangers, occasional heart-to-heart conversations, periods of solitude, and more. This animated YouTube video sums up what Hall and Merolla discovered while mapping social biomes. What Is the Communicate Bond Belong (CBB) Theory?

Myers-Briggs Type Indicator A chart with descriptions of each Myers–Briggs personality type and the four dichotomies central to the theory. The Myers–Briggs Type Indicator (MBTI) assessment is a psychometric questionnaire designed to measure psychological preferences in how people perceive the world and make decisions.[1][2][3] The questionnaire was created by Katharine Cook Briggs and Isabel Briggs Myers based on an extrapolation from the typological theories proposed by Carl Gustav Jung's 1921 book Psychological Types (English edition, 1923[4]). Although very popular in businesses around the world, the MBTI is widely criticized by academics for its methodological weaknesses, poor statistical validity and low reliability.[6][7] Origins of the theory[edit] Jung's type theory introduced a sequence of four cognitive functions (thinking, feeling, sensation, and intuition), each having one of two orientations (extraversion or introversion), for a total of eight dominant functions. Historical development[edit] Type[edit]

Why Extraversion May Not Matter Recent research evidence suggests that while extraversion is predictive of many positive social outcomes, it may not be extraversion itself that matters. Instead, it may be possession of social skills or competencies that are better predictors of social outcomes than personality constructs such as extraversion. Let me explain. Extraversion is a core personality trait that is associated with high levels of energy, expressing emotions, and seeking the company of others. However, social skills come into play. In a very recent study, we found, consistent with previous research, that extraversion was related to both the attainment of leadership positions and a self-rated measure of leader effectiveness. This makes sense. Think about some of the extraverted folks in entertainment—the Robin Williams, or Jim Carrey types. So, personality matters, but skills and competencies may matter more when it comes to complex social behaviors such as leadership. Riggio, R.E., & Reichard, R.

Are You an Ambivert? I have always struggled with the question: “Are you an extrovert or introvert?” Like most people, I don’t quite fit into either category. In this article and video I want to introduce you to the concept of an ambivert: Ambivert: n Someone who exhibits qualities of both introversion and extroversion. Extroversion and introversion describe how someone reacts to people. Research has found that how we react to people is physiological. We can also self-select our tendency towards extroversion. I am drawn to people, I get energy from social gatherings and am pretty outgoing. I will use the terms as labels for the sake of the article, but let’s get one thing straight: It’s Not a Label, It’s a Spectrum Instead of thinking about extroversion or introversion as labels, let’s think about this as an extroversion spectrum: When I talk about the Big 5 Personality traits I explain that there is an extroversion scale. Why Ambiverts Are Awesome 1. First, lets find out how you rank on the scale. 2. 3. 4. Toxic:

INFP Relationships INFPs present a calm, pleasant face to the world. They appear to be tranquil and peaceful to others, with simple desires. In fact, the INFP internally feels his or her life intensely. In the relationship arena, this causes them to have a very deep capacity for love and caring which is not frequently found with such intensity in the other types. Most INFPs will exhibit the following strengths with regards to relationship issues: Warmly concerned and caring towards others Sensitive and perceptive about what others are feeling Loyal and committed - they want lifelong relationships Deep capacity for love and caring Driven to meet other's needs Strive for "win-win" situations Nurturing, supportive and encouraging Likely to recognize and appreciate other's need for space Able to express themselves well Flexible and diverse Most INFPs will exhibit the following weaknesses with regards to relationship issues: INFPs feel tremendous loyalty and commitment to their relationships.

untitled Ambiverts, Problem-Finders, and the Surprising Secrets of Selling Your Ideas Whether it’s “selling” your ideas, your writing, or yourself to a potential mate, the art of the sell is crucial to your fulfillment in life, both personal and professional. So argues Dan Pink in To Sell Is Human: The Surprising Truth About Moving Others (public library; UK) — a provocative anatomy of the art-science of “selling” in the broadest possible sense of the word, substantiated by ample research spanning psychology, behavioral economics, and the social sciences. Pink, wary of the disagreeable twinges accompanying the claim that everyone should self-identify as a salesperson, preemptively counters in the introduction: I’m convinced we’ve gotten it wrong.This is a book about sales. But it is unlike any book about sales you have read (or ignored) before. That’s because selling in all its dimensions — whether pushing Buicks on a lot or pitching ideas in a meeting — has changed more in the last ten years than it did over the previous hundred. Pink summarizes:

Feeling Feeling is the nominalization of the verb to feel. The word was first used in the English language to describe the physical sensation of touch through either experience or perception.[1] The word is also used to describe experiences other than the physical sensation of touch, such as "a feeling of warmth".[2] and of sentience in general. In Latin, "sentire"[3] meant to feel, hear or smell. Perception of the physical world does not necessarily result in a universal reaction among receivers (see emotions), but varies depending on one's tendency to handle the situation, how the situation relates to the receiver's past experiences, and any number of other factors. Gut feeling[edit] See also[edit] [edit] External links[edit] A Dictionary of Feelings Are You an Introverted Boss? - Douglas R. Conant by Douglas R. Conant | 10:19 AM April 4, 2011 Every time I’ve taken a Meyers-Briggs test, I score high on the introversion scale. As an introvert, I enjoy being by myself. So how do I manage this? Introverts need thinking time. Introverts aren’t as aloof as they appear. One of the best ways I’ve found to help people overcome their discomfort around my behavior is to simply declare myself. I’ve also found that doing this helps people become much more comfortable about declaring themselves to me. Introverts benefit from familiar touchstones. In the end, we introverts never really change our stripes, though we too often put ourselves through painful contortions in attempting to adapt to other people’s styles. If you are an introvert — or work for one — what are the most successful strategies you have discovered? Douglas R.

7 Persistent Myths about Introverts & Extroverts Myths and misunderstandings about both introverts and extroverts abound. Introverts don’t like people. Extroverts are shallow. These are just some of the fictions surrounding these types. “The introvert gets their energy from within, while the extrovert is charged up by people, places and stimuli outside of them,” according to Jennifer B. Introverts embrace solitude and require alone time, she said. Extroverts like to mingle and move around in social situations. In other words, external activities excite extroverts, while ideas and inner reflection stimulate introverts, writes clinical psychologist Laurie Helgoe, Ph.D, in her book Introvert Power: Why Your Inner Life Is Your Hidden Strength. “Brain imaging studies have shown that when introverts and extroverts respond to external stimulation, introverts have more activity in the regions of the brain that process information, make meaning and problem solve,” she said. Below, you’ll find more common misconceptions, followed by the facts.

Portrait of an INFP As an INFP, your primary mode of living is focused internally, where you deal with things according to how you feel about them, or how they fit into your personal value system. Your secondary mode is external, where you take things in primarily via your intuition. INFPs, more than other iNtuitive Feeling types, are focused on making the world a better place for people. INFPs are highly intuitive about people. Generally thoughtful and considerate, INFPs are good listeners and put people at ease. INFPs do not like conflict, and go to great lengths to avoid it. INFPs are flexible and laid-back, until one of their values is violated. When it comes to the mundane details of life maintenance, INFPs are typically completely unaware of such things. INFPs do not like to deal with hard facts and logic. INFPs have very high standards and are perfectionists. INFPs are usually talented writers. Check us out on Facebook Careers for INFP INFP Relationships Personal Growth Contact us

The six biggest mistakes of managing an introvert Perception Since the rise of experimental psychology in the 19th Century, psychology's understanding of perception has progressed by combining a variety of techniques.[3] Psychophysics quantitatively describes the relationships between the physical qualities of the sensory input and perception.[5] Sensory neuroscience studies the brain mechanisms underlying perception. Perceptual systems can also be studied computationally, in terms of the information they process. Perceptual issues in philosophy include the extent to which sensory qualities such as sound, smell or color exist in objective reality rather than in the mind of the perceiver.[3] The perceptual systems of the brain enable individuals to see the world around them as stable, even though the sensory information is typically incomplete and rapidly varying. Human and animal brains are structured in a modular way, with different areas processing different kinds of sensory information. Process and terminology[edit] Perception and reality[edit]

So Apparently There Are 4 Kinds of Introversion Photo: IPS/UIG via Getty Images Introversion, thanks largely to Susan Cain’s 2012 best seller Quiet, is having something of a cultural moment. Once a mostly misunderstood personality trait — and often considered a behavioral defect when it was considered at all — it’s now the subject of countless other books and online listicles (and, more recently, parodies of listicles). “When you survey a person on the street, asking them to define introversion, what comes up as the prototypical characteristics … are things like thoughtful or introspective,” said Cheek, a psychology professor at Wellesley College. Quiz: What kind of introvert are you? Take the quiz below to see where you rank in this newer theory of introversion. This is actually a problem that was identified at least as early as 1980, when one study found that the “scientific” and “common-sense” definitions of introversion didn’t quite match up. Here’s a brief description of each: Thinking; Thinking introversion is a newer concept.