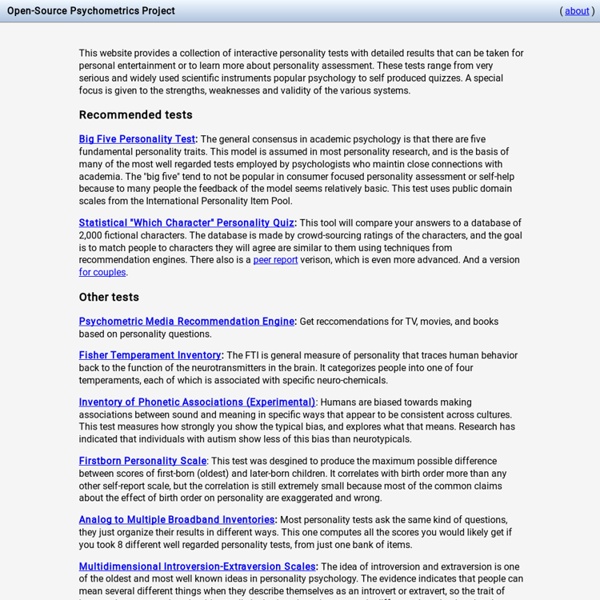 This website provides a collection of interactive personality tests with detailed results that can be taken for personal entertainment or to learn more about personality assessment. These tests range from very serious and widely used scientific instruments popular psychology and self produced quizzes. A special focus is given to the strengths, weaknesses and validity of the various systems. All of these tests are provided for educational and entertainment purposes only. They are not clinically administered and as such the results are not suitable for basing important decisions off of. These tests are also not infallible, if the results say something about you that you don't think is true, you are right and it is wrong.

Urban Balance Counseling Blog - Current info for good mental health Anna Kultys is a Licensed Clinical Professional Counselor with experience in providing adults with individual and group therapy in a variety of settings. Her key areas of clinical expertise consist of depression, anxiety, coping with trauma, concerns related to stress, work, and relationships, as well as confidence and identity issues. She is also fluent in the Polish language and culture. Anna works from UB’s Evanston Counseling office. View Anna’s Full Bio Best Online Psychology Tests Want to know what’s really going on in your own head? The mental health Web site PsychCentral offers a list of the best online psychology tests. Some of these are used to collect data for research experiments, while others are skill tests or quizzes that offer personal insights. Here are a few of the best.

Yann LeCun's Research and Contributions Things I worked on. Current Projects PhD During my PhD, in 1985, I proposed and published (in French), an early version of the learning algorithm known as error backpropagation[LeCun, 1985][LeCun, 1986]. Although a special form of my algorithm was equivalent to backpropagation it was based on backpropagating "virtual target values" for the hidden units rather than gradients.

How to Find Your Purpose and Do What You Love “Find something more important than you are,” philosopher Dan Dennett once said in discussing the secret of happiness, “and dedicate your life to it.” But how, exactly, do we find that? Surely, it isn’t by luck. I myself am a firm believer in the power of curiosity and choice as the engine of fulfillment, but precisely how you arrive at your true calling is an intricate and highly individual dance of discovery. Morituri Salutamus: Poem for the Fiftieth Anniversary of the Class of 1825 in Bowdoin College by Henry Wadsworth Longfellow Tempora labuntur, tacitisque senescimus annis, Et fugiunt freno non remorante dies. Ovid, Fastorum, Lib. vi. "O Cæsar, we who are about to die Salute you!" Self-evaluation maintenance theory Self-evaluation maintenance (SEM) theory refers to discrepancies between two people in a relationship. Two people in a relationship each aim to keep themselves feeling good psychologically throughout a comparison process to the other person.[1] Self-evaluation is defined as the way a person views him/herself. It is the continuous process of determining personal growth and progress, which can be raised or lowered by the behavior of a close other (a person that is psychologically close). People are more threatened by friends than strangers. Abraham Tesser created the self-evaluation maintenance theory in 1988.

Interactive Activation & Competition (Built with Processing) This applet is a demonstration of "Interactive Activation and Competition" neural networks, as first described by J.L. McClelland in the following paper: McClelland, J.L. (1981). Psycology: Know Thyself I’ve decided to start a series called 100 Things You Should Know about People. As in: 100 things you should know if you are going to design an effective and persuasive website, web application or software application. Or maybe just 100 things that everyone should know about humans! Linear Algebra tutorial By Kardi Teknomo, PhD. Share this: Google+ In this simple Linear Algebra tutorial, you will review the basic operations on vectors, matrices, solving linear equations and eigen systems. I made free educational interactive programs online for almost every topic. The programs are well suited to guide discovery experiences where you can focus on the concept of linear algebra and let the program compute the more complex calculation.

Narcissistic Personality Inventory: Narcissism Test This is a interactive version of the Narcissistic Personality Inventory. Introduction Narcissism in personality trait generally conceived of as excessive self love. In Greek mythology Narcissus was a man who fell in love with his reflection in a pool of water. The NPI was developed by Raskin and Hall (1979) for the measurement of narcissism as a personality trait in social psychological research. It is based on the definition of narcissistic personality disorder found in the DSM-III, but is not a diagnostic tool for NPD and instead measures subclinical or normal expressions of narcissism. popularity contest - Tweetable Mathematical Art - Programming Puzzles & Code Golf Stack Exchange OK, this one gave me a hard time. I think it's pretty nice though, even if the results are not so arty as some others. That's the deal with randomness. Maybe some intermediate images look better, but I really wanted to have a fully working algorithm with voronoi diagrams. This is one example of the final algorithm.

Psychological ("personality") Types Psychological ("personality") Types According to Jung's theory of Psychological Types we are all different in fundamental ways. One's ability to process different information is limited by their particular type. These types are sixteen. People can be either Extroverts or Introverts, depending on the direction of their activity ; Thinking, Feeling, Sensing, Intuitive, according to their own information pathways; Judging or Perceiving, depending on the method in which they process received information. Extroverts vs.