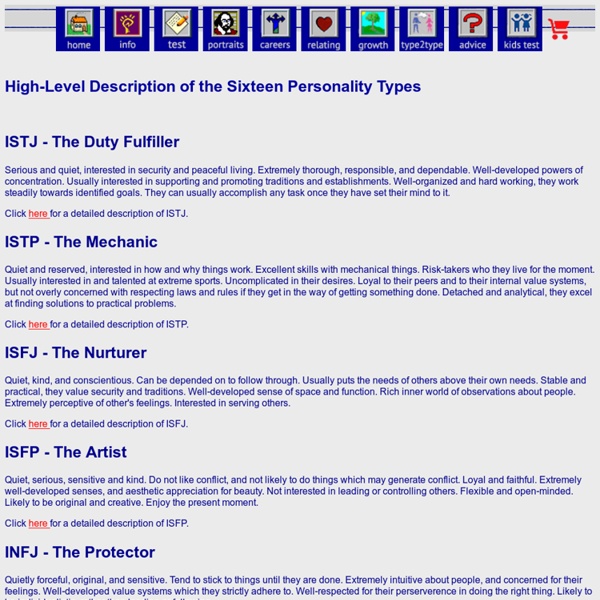 12 Brain Rules Buy Brain Rules The Brain Rules, illustrated Explore each rule through illustrations, charts and video. These tutorials are designed to reinforce the concepts in the book; we recommend reading the corresponding chapter first. Myers Briggs Personality Faces Personality Types: Development & Myers-Briggs MBTI theory The Faces of Personality Type Development By Ross Reinhold, INTJ This article is an introduction to a system for understanding the dynamics of personal growth and personality development, using the language and concepts developed by Carl Jung, Isabel Myers, Katharine Briggs and the personality system that has developed around the Myers-Briggs Type Indicator (MBTI)*. The Faces model is based on the theory of eight mental functions, developed by John Beebe, Harold Grant and other Jungian theorists. Readers unfamiliar with this theory can obtain an introduction by reading the Ken Green article in the "Best of the Bulletin of Psychological Type" (Volume 1, Chapter 2). The Appendix at the end of this article also will be helpful.

Crafter (role variant) Crafters are tactical operators, concrete in speech and utilitarian in action. In social situations, they are directive and reserved.[2] Crafters are masters at using tools of every type—artistic, technological, martial. Although they are introverts, they are authoritarian in their interactions with others and can be forceful at influencing people. They focus on accomplishing tasks efficiently and skillfully. To master the tool of their interest, Crafters require a certain degree of seclusion in which to practice. Spinning Dancer If the foot touching the ground is perceived to be the left foot, the dancer appears to be spinning clockwise (if seen from above); if it is taken to be the right foot, then she appears to be spinning anti-clockwise. The Spinning Dancer, also known as the silhouette illusion, is a kinetic, bistable optical illusion resembling a pirouetting female dancer. The illusion, created in 2003 by web designer Nobuyuki Kayahara,[1][2] involves the apparent direction of motion of the figure. Some observers initially see the figure as spinning clockwise (viewed from above) and some anti-clockwise. Additionally, some may see the figure suddenly spin in the opposite direction.[2] The illusion derives from the lack of visual cues for depth.

25 TED Talks that will change how you see the world Mahatma Gandhi once said, “Live as if you were to die tomorrow. Learn as if you were to live forever.” If this sounds like a philosophy you can relate to, then you’ll love TED talks. These informational 17 minute presentations are given at annual conferences by some of the world’s greatest thinkers. Their aim is simple: To inspire ideas and change attitudes around the world. (Pseudo?)science behind MBTI When Carl Jung wrote about the cognitive functions, he did not have the technological resources we have today to study parts of the brain, so he relied largely on anecdotal evidence from interactions with people. Now, neuroscience has evolved to the point where we can pinpoint certain aspects of the brain that are responsible for personality and behavior. This has allowed people like Jonathan Niednagel and Lenore Thomson to expand upon Jung's original theories and give an added dimension to personality typing. However, science hasn't proven everything, and a lot of the theories surrounding MBTI are still not evidence-based as of yet.I will point out that neither myself, Niednagel, nor Thomson are neuroscientists; it is the work of others that has led them to develop their theories.

Protector (role variant) The Protector Guardian is one of the 16 role variants of the Keirsey Temperament Sorter,[1] a self-assessed personality questionnaire designed to help people better understand themselves. David Keirsey originally described the Protector role variant; however, a brief summary of the personality types described by Isabel Myers contributed to its development. Protectors correlate with the ISFJ Myers-Briggs type.[2] Protectors are observant, cooperative, informative, and attentive. Sequence learning In cognitive psychology, sequence learning is inherent to human ability because it is an integrated part of conscious and nonconscious learning as well as activities. Sequences of information or sequences of actions are used in various everyday tasks: "from sequencing sounds in speech, to sequencing movements in typing or playing instruments, to sequencing actions in driving an automobile."[1] Sequence learning can be used to study skill acquisition and in studies of various groups ranging from neuropsychological patients to infants.[1] According to Ritter and Nerb, “The order in which material is presented can strongly influence what is learned, how fast performance increases, and sometimes even whether the material is learned at all.”[2] Sequence learning, more known and understood as a form of explicit learning, is now also being studied as a form of implicit learning as well as other forms of learning. History[edit] Types of sequence learning[edit]

Table of contents (With last update date) Cover Foreword (August 13, 2009) Part 1. Quantum theory and consciousness Preface to part 1 (April 12, 2000) Promoter (role variant) The Promoter Artisan is one of the 16 role variants of the Keirsey Temperament Sorter,[1] a self-assessed personality questionnaire designed to help people better understand themselves. David Keirsey originally described the Promoter role variant; however, a brief summary of the personality types described by Isabel Myers contributed to its development. Promoters correlate with the ESTP Myers-Briggs type.[2] Implicit learning Implicit learning is the learning of complex information in an incidental manner, without awareness of what has been learned.[1] According to Frensch and Rünger (2003) the general definition of implicit learning is still subject to some controversy, although the topic has had some significant developments since the 1960s.[2] Implicit learning may require a certain minimal amount of attention and may depend on attentional and working memory mechanisms. The result of implicit learning is implicit knowledge in the form of abstract (but possibly instantiated) representations rather than verbatim or aggregate representations,[3] and scholars have drawn similarities between implicit learning and implicit memory. Examples from daily life, like learning how to ride a bicycle or how to swim, are cited as demonstrations of the nature of implicit learning and its mechanism. Definition[edit] Some definitions among dozens: History[edit]