Noam Chomsky - The Purpose of Education 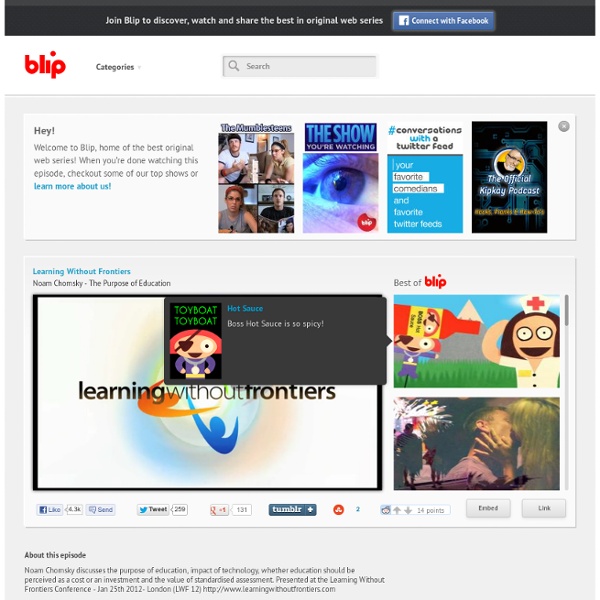 Philanthropy Daily® » Anti-intellectualism and higher education The new emphasis on accountability in higher education can have its upsides but the last couple of weeks have reminded me about the anti-intellectualism that often seems to come with such movements. A couple of weeks ago, Rick Scott, Governor of Florida, suggested that producing degrees in anthropology was not a "vital interest" of his state. He told some editorial writers that there are only a limited number of jobs for anthropologists and wondered why were were producing so many. As a case in point, he cited his daughter who has a degree in anthropology from the College of William and Mary and said that her major did not lead her to a job. A predictable uproar over these comments ensued, with academics across the country accusing Scott of knowing nothing about higher education. They have a point. As it turns out, Mr. Parents have joked for years about their kids' decisions to major in English or Philosophy, complaining to each other that these are not practical majors.

George E. Vaillant's: Aging Well: Surprising Guideposts to a Happier Life from the Landmark Harvard Study of Adult Development George E. Vaillant's "We all need models for how to live from retirement to past 80--with joy," writes George Vaillant, M.D., director of the Harvard Study of Adult Development. "Here you have these wonderful files, and you seem little interested in how we cope with increasing age ... our adaptability, our zest for life," one of these subjects wrote to Vaillant, a researcher, psychiatrist, and Harvard Medical School professor, about how he was using this information. We also learn what makes old age vital and interesting. Vaillant is empathetic and sometimes surprisingly poetic: "Owning an old brain, you see, is rather like owning an old car.... Other reviews This groundbreaking sociological analysis is based on three research projects that followed over 800 people from their adolescence through old age. An unavoidable task of the living is to change with time.

Promising remedial math reform in Tennessee expands A group of community colleges in Tennessee is going into local high schools to try to help more students get ready for college math. The experiment has showed impressive early results, and now the state’s governor is forking over serious money to expand it. The four community colleges have worked with teachers at local high schools to run math labs for 600 high school seniors who appeared likely to place into remedial tracks after high school. Pass rates have been high. Even better, 25 percent of those students completed a credit-bearing, college-level math course while still in high school (remedial math is typically noncredit). “They were completely done with math before they even started” college, said Kimberly G. Bill Haslam, the state’s Republican governor, caught wind of the project. That money has allowed 114 high schools and all 13 of the state’s community colleges to participate. Officials in Tennessee aren’t stopping there. 'Not Just Talk' Changes are also afoot in Florida.

A Review of B. F. Skinner's Verbal Behavior Preface Rereading this review after eight years, I find little of substance that I would change if I were to write it today. I am not aware of any theoretical or experimental work that challenges its conclusions; nor, so far as I know, has there been any attempt to meet the criticisms that are raised in the review or to show that they are erroneous or ill-founded. I had intended this review not specifically as a criticism of Skinner's speculations regarding language, but rather as a more general critique of behaviorist (I would now prefer to say "empiricist") speculation as to the nature of higher mental processes. My reason for discussing Skinner's book in such detail was that it was the most careful and thoroughgoing presentation of such speculations, an evaluation that I feel is still accurate. References in the Preface Chomsky, N., "Explanatory Models in Linguistics," in Logic, Methodology and Philosophy of Science, ed. ----------, Current Issues in Linguistic Theory. Katz, J. and P.

A Brief History of Anti-Intellectualism in American Media The June 2008 cover of the Washington Post Magazine featured reporter Liza Mundy’s article “The Amazing Adventures of Supergrad.” Under this title ran the teaser, “The most sophisticated, accomplished, entitled graduates ever produced by American colleges are heading into the workplace. And employers are falling all over themselves to vie for their talents.” The lengthy piece portrays Emma Clippinger, then a Brown University junior who was double-majoring in developmental studies and comparative literature, serving as captain of the equestrian team, and helping run Gardens for Health International, an organization she cofounded that focuses on the nutrition of HIV-positive Rwandans. Mundy then breathlessly tells her readers that millennials are “one of the most heavily recruited cohorts to enter the American workforce, their hearts and minds incessantly battled over.” Mundy’s article—while not the standard higher education media fare—is not unique. Little Teaching and Learning Dane S.

School is a prison — and damaging our kids Parents send their children to school with the best of intentions, believing that’s what they need to become productive and happy adults. Many have qualms about how well schools are performing, but the conventional wisdom is that these issues can be resolved with more money, better teachers, more challenging curricula and/or more rigorous tests. But what if the real problem is school itself? The unfortunate fact is that one of our most cherished institutions is, by its very nature, failing our children and our society. School is a place where children are compelled to be, and where their freedom is greatly restricted — far more restricted than most adults would tolerate in their workplaces. Compulsory schooling has been a fixture of our culture now for several generations. Schools as we know them today are a product of history, not of research into how children learn. As a society, we tend to shrug off such findings. I have spent much of my research career studying how children learn.

Why Physicist Michio Kaku Is Wrong About U.S. Science Students: It’s the Incentives, Stupid – Mike the Mad Biologist While physicist Michio Kaku is correct when he suggests that immigration has been an incredible boon for U.S. science, he’s dead wrong when he claims that U.S. students are bad at science: The information revolution has a weakness, and the weakness is precisely the educational system. The United States has the worst educational system known to science. Our graduates compete regularly at the level of third world countries. So how come the scientific establishment of the United States doesn’t collapse? When I first came across Kaku’s statement, I said to myself, “Crap. I part company with Kaku when he asserts that American students can’t do science (or that there aren’t enough of them – I’m not sure which he’s arguing). It might be that many Americans don’t go into science not because they are incapable (or lazy or damaged by their education), but because they’re smart. I agree. When my father finished Harvard Law School in 1948, he went to work at one of the best law firms in New York.

Hacker Ethics and Higher Learning It is easy to be distracted by the immense technological changes affecting higher education today. Change is here. We are all faced with it in our classrooms and our offices, and we see it in the lives of students, donors, administrators, and alumni. The changes are happening so fast; the quality of what is considered “normal” is transforming quickly. How can we assess the key issues of place and face in higher education when the ground beneath our collective feet keeps shifting? Many may quibble over the nuances of the history and development of higher education and modern communications technology, but in the hope of stimulating a conversation about our collective future, in this short space I will accentuate two moral codes, two idealized orientations, which do not end in lines of convergence but accentuate forceful tensions in higher education. The Rise of Computing and Digital Connectivity I became infatuated with computers in college. 1. Does this sound too sensational? The Exploit

The Path to Critical Thinking Few of us are effective critical thinkers—who has time? The good news, says Stever Robbins, is that this skill can be learned. by Stever Robbins Can you write a refresher on critical thinking? We business leaders so like to believe that we can think well, but we don't. What's logic got to do with it? Purely emotional decision making is bad news. Critical thinking starts with logic. We also sloppily reverse cause and effect. There are many excellent books on logic. The trap of assuming You can think critically without knowing where the facts stop and your own neurotic assumptions begin. When we don't know something, we assume. Finding and busting "conventional wisdom" can be the key to an empire. Assumptions can also cripple us. Some assumptions run so deep they're hard to question. Next time you're grappling with a problem, spend time brainstorming your assumptions. The truth will set you free (statistics notwithstanding) Have you ever noticed how terrified we are of the truth? Help!

Montessori Curriculum Piaget Kids R Kids As demonstrated by the renowned psychologist, Jean Piaget, children learn best through play, so at Kids 'R' Kids Learning Academies we've developed hands-on learning experiences for all levels of learners. Our curriculum meets the standards for NAEYC, the National Association for the Education of Young Children, while remaining fun and flexible for every child. So who were Montessori and Piaget? Marie Montessori was an Italian woman who in the 1920`S, developed a teaching method to help her successfully work with mentally handicapped children who had very short attention spans. With children under the age of three years, Montessori and Piaget methods are very similar. At preschool age the differences in the teaching philosophies of Montessori and Piaget become apparent. Kids 'R' Kids Piaget classrooms have advanced academic materials and more teacher-directed lessons and does also incorporate 'child directed” activities times as well. Under the age of three: Children are grouped by age.