The intellectual and psychosocial nature of extreme giftedness 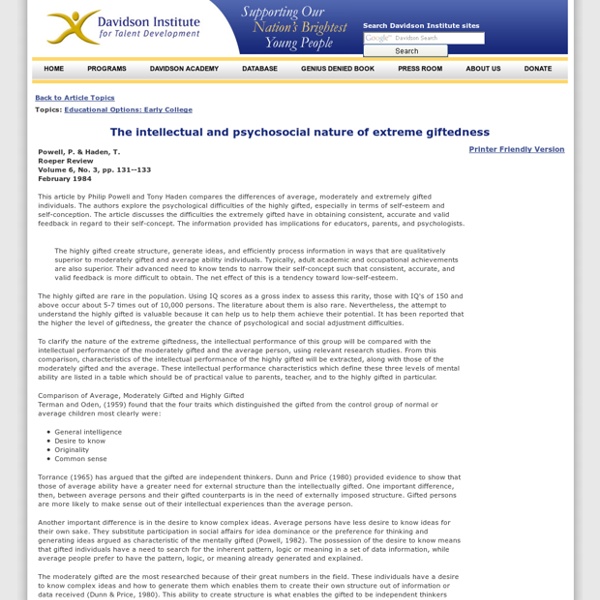 Powell, P. & Haden, T. Roeper Review Volume 6, No. 3, pp. 131--133 February 1984 This article by Philip Powell and Tony Haden compares the differences of average, moderately and extremely gifted individuals. The authors explore the psychological difficulties of the highly gifted, especially in terms of self-esteem and self-conception. The highly gifted create structure, generate ideas, and efficiently process information in ways that are qualitatively superior to moderately gifted and average ability individuals. The highly gifted are rare in the population. To clarify the nature of the extreme giftedness, the intellectual performance of this group will be compared with the intellectual performance of the moderately gifted and the average person, using relevant research studies. General intelligence Desire to know Originality Common sense Torrance (1965) has argued that the gifted are independent thinkers. Another important difference is in the desire to know complex ideas. Philip M. Related:  Personality: Tests, Types, Theories • GT T H E R A P Y

Positive Disintegration The Theory of Positive Disintegration (TPD) by Kazimierz Dąbrowski is a theory of personality development. Unlike mainstream psychology, Dąbrowski's theoretical framework views psychological tension and anxiety as necessary for growth. These "disintegrative" processes are therefore seen as "positive," whereas people who fail to go through positive disintegration may remain for their entire lives in a state of "primary integration." Advancing into disintegration and into the higher levels of development is predicated on having developmental potential, including overexcitabilities, above-average reactions to stimuli. Unlike some other theories of development such as Erikson's stages of psychosocial development, it is not assumed that even a majority of people progress through all levels. TPD is not a theory of stages, and levels do not correlate with age. Dąbrowski's theory[edit] Dąbrowski's theory of personality development emphasized several major features including: Overexcitability

The Profoundly Gifted Adult By Inderbir Kaur Sandhu, Ph.D Q: Years after raising three gifted children, I am still puzzling over our middle kid, who is distinct from his sibs and many of his peers. He has been diagnosed at different times with OCD and anxiety disorder, and others have raised the question as to whether or note he has Asperger's syndrome. I do not believe that the latter is the case and that his characteristics are the result of his rather unique mind. He was tested at age 5 only because he was quite different. In fact a private kindergarten later refused to re-enroll him in first grade unless he went to see one of "their" psychologists, because he would not "connect" with other children. His IQ test at age five resulted in an IQ of 150. That said, he cannot lead a conventional life and still pursues his interests irregardless of their practicality. My other children have professions and we all just let "Eric be Eric," but he is barely getting by financially at age 38.

IQ ranges and real-life functioning © Paul Cooijmans Introduction This is a list of I.Q. ranges with for each a brief description of typical functioning and other features. In addition it is known that I.Q. has the greatest significance to real-life functioning (and the highest correlation with "g", the common factor shared by all mental ability tests) at its lowest ranges, and becomes less important as one goes higher; the more you have of it, the less important it gets, just as with money. Brief overview of the I.Q. ranges Descriptions of the I.Q. ranges Lower than 20 - Profound retardation Usually multi-handicapped with obvious physical deformities and short life expectancy. 20-34 - Severely retarded Basic intellectual tasks, including language, are difficult to learn. Profound and severe retardation are typically caused by brain damage during pregnancy, at birth, or early in life, and as such not genetic and not inherited. 35-49 - Moderately retarded Can learn simple life skills and employment tasks with special education.

How being called smart can actually make you stupid | Neurobonkers A few months ago I posted a piece which has become my most popular blog post by quite a landslide. The post covered various techniques for learning and looked at the empirical evidence for and against their efficacy based on recent research. This post is my follow up, in which I look at the case for one tip for learning that it seems really could have a big impact. A growing body of evidence from the last two decades suggests that our attitude towards our own potential for intelligence has a considerable impact on our lives, furthermore we are incredibly vulnerable to having this attitude or "mindset" moulded for better or worse, by how people praise us in a way that is both shocking and problematic. Counterintuitively, it has been repeatedly demonstrated that praising people for their intelligence rather than their effort can actually make people perform drastically worse over time, avoid future challenges and form negative attitudes to learning and towards themselves. References:

Right Brain Smarts: Creative People’s Brains Function Differently A new study has ended the controversy (or perhaps just stirred up more) by demonstrating that creative people do think in a fundamentally different way than everyone else. The study showed that non-creative types versus creative types do indeed exhibit quite different patterns of brain activity while going about solving problems, and even just while daydreaming. Scientists have wondered for some time if people who think “creatively” are able to somehow think differently from those who seem to think in a more methodical fashion. However, other researchers have argued that creative thought is fundamentally different than other forms of thought. The new study led by John Kounios, professor of psychology at Drexel University and Mark Jung-Beeman of Northwestern University compared the physiological brain activity of creative versus noncreative problem solvers. Second, creative and methodical solvers exhibited different activity in areas of the brain that process visual information.

Overexcitability Overexcitabilities are sometimes used to help predict "giftedness" in both children and adults: The more "excited" or the more stimulated a sense is in a person, the more susceptible or prone his brain is to react in an extreme manner to anything that triggers it, thus the possibilities of expansion in ways of learning are increased in this person. Gifted people appear to be very in touch with their 5 senses possibly making them, in a sense, more 'global' than others.

5 Psychological Experiments That Reveal Our Dark Side We present you the most notorious and most popular experiments of all-time. Some of the most fascinating and deplorable experiments ever conducted that proove that we do have a dark side… During the 1950s, Solomon Asch conducted and published a series of laboratory experiments that demonstrated the degree to which an individual’s own opinions are influenced by those of a majority group. Male college students participated in a simple “perceptual” task. Only one participant was actually a genuine subject for the experiment, the rest being confederates, carefully tutored to give certain pre-selected responses. The participants gave a variety of answers, at first correct, to avoid arousing suspicion in the subject, but then with some incorrect responses added. The Asch Experiment results were interesting and showed that peer pressure could have a measurable influence on the answers given. The researchers had three hypotheses: 1. Overall 40% offered some help to the victim. 1.

Intellectual Giftedness Intellectual giftedness, often referred to as high IQ, is usually given short shrift when it comes to considerations of the special needs of exceptional people. Because giftedness appears on the surface to be nothing but an advantage, the challenges it presents are often ignored and unknown. Giftedness is not about being better, it's about being *different*. A gifted person's life experience is significantly different from the norm. Along with it's blessings, it brings it's own set of challenges. I'm of the opinion that, despite our desire for simple quantification of intelligence, noting characteristics of giftedness is perhaps a more useful, or at least complementary, method of detecting the intelligent. Energy Curiousity Speed Concentration Sensitivity, empathy, insight and intuition Sophistication of thinking, highly developed moral sense Nonconformist/Independent Persistence Humour Uses up jobs

Gender and Genius Kerr, B. Center for Gifted Education The College of William & Mary This article by Barbara Kerr discusses what has shaped modern gender identity in the Western world. She also examines its implication on gifted young people. Ranging in scope from Freud to collegiate athletics, Kerr's article suggests that much ground remains to be covered in establishing gender equity. Our ideas about what is gifted behavior for a boy or for a girl are imbued with society's notions of appropriate gender identity. Sigmund Freud's (1933) theory of gender identity development is still one of the most influential theories, despite its lack of empirical support. Freud also gave us the idea that girls and women are incomplete men. Despite the hostility with which the psychoanalytic establishment greeted disagreement, Karen Horney (1939) disputed this model of gender identity development. Therefore, a new stereotype of the gifted boy was born, of the well adjusted, athletic, popular guy.

Narcissistic Personality Inventory: Narcissism Test This is a interactive version of the Narcissistic Personality Inventory. Introduction Narcissism in personality trait generally conceived of as excessive self love. In Greek mythology Narcissus was a man who fell in love with his reflection in a pool of water. The NPI was developed by Raskin and Hall (1979) for the measurement of narcissism as a personality trait in social psychological research. Procedure The test consists of forty pairs of statements. Participation Your use of this assessment must be strictly for educational purposes. Paternal Influence on Gifted Males Hammond, D.R., Hébert, T.P., & Pagnani, A.R. Journal for the Education of the Gifted Prufrock Press Vol. 33, No. 2, pp. 241–274 2009 This study examines the father-son relationships of 10 prominent gifted men of achievement to identify factors influencing talent development. Through biographical analysis, 6 significant themes were identified: unconditional belief in son, strong work ethic, encouragement and guidance, maintaining high expectations and fostering determination, pride in son’s accomplishments, and mutual admiration and respect. Implications for parents and educators of high-achieving gifted males are discussed. “My father didn’t tell me how to live; he lived and let me watch him do it.” It is a challenging time to be a boy in this country. While concerns about boys are becoming part of the national conversation, a parallel phenomenon is evolving. Review of Related Literature The late 1990s saw the publication of several books on parenting boys. Selection of Subjects

Giftedness in the Workplace: Can the Bright Mind Thrive in Giftedness in the Workplace: Can the Bright Mind Thrive in Organizations? By Mary-Elaine Jacobsen, PhD So Many Interests Inspiring though they may be, tales of eminence often imply that from an early age the truly gifted know exactly what they must do and undeviatingly pursue their lifework. Such distortions exacerbate gifted people's inner pressure to make their mark in the world. Dreams fade quickly when gifted employees begin to equate work with constraint and exploitation. Could the goals of work and gifted needs be aligned? Exceptional intellectual and creative abilities can lead to highly successful careers, sometimes in multiple fields. From time to time relatively unfettered bright minds alter the direction of their domain as a whole. With the bulk of their formal education behind them, novitiates in the world of work often enter with a full head of steam, ready and willing to roll up their sleeves and make their mark. I couldn't have been more wrong! © Dr. Dr. The Brat Stops Here!