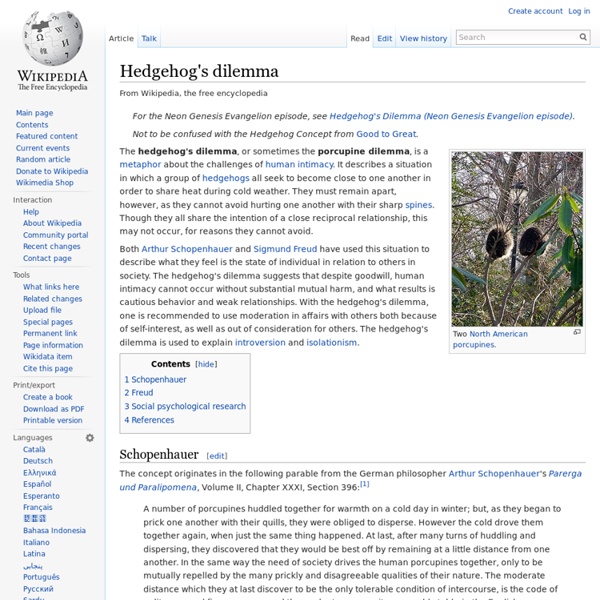 Both Arthur Schopenhauer and Sigmund Freud have used this situation to describe what they feel is the state of individual in relation to others in society. The hedgehog's dilemma suggests that despite goodwill, human intimacy cannot occur without substantial mutual harm, and what results is cautious behavior and weak relationships. With the hedgehog's dilemma, one is recommended to use moderation in affairs with others both because of self-interest, as well as out of consideration for others. The hedgehog's dilemma is used to explain introversion and isolationism. Schopenhauer[edit] The concept originates in the following parable from the German philosopher Arthur Schopenhauer's Parerga und Paralipomena, Volume II, Chapter XXXI, Section 396:[1] A number of porcupines huddled together for warmth on a cold day in winter; but, as they began to prick one another with their quills, they were obliged to disperse. Freud[edit] Social psychological research[edit] References[edit]

Madonna–whore complex In sexual politics the view of women as either Madonnas or whores limits women's sexual expression, offering two mutually exclusive ways to construct a sexual identity.[4] The term is also used popularly, often with subtly different meanings. Causes[edit] Freud argued that the Madonna–whore complex is caused by oedipal castration fears which arise when a man experiences the affection he once felt for his mother with women he now sexually desires. In order to manage this anxiety, the man categorizes women into two groups: women he can admire and women he finds sexually attractive. Whereas the man loves women in the former category, he despises and devalues the latter group.[5] Psychoanalyst Richard Tuch suggests that Freud offered at least one alternative explanation for the Madonna–whore complex:

10 Ways to Make Your Relationship Magically Romantic Creating magical moments in your relationship is something everyone thinks about, but few people do. Perhaps it's because they actually can't think of exactly what to do. Here are ten "acts of love" that you can do with and for your partner to bring a little more romance into your relationship. Nikolai Berdyaev Berdyaev's grave, Clamart (France). Nikolai Alexandrovich Berdyaev (/bərˈdjɑːjɛf, -jɛv/;[1] Russian: Никола́й Алекса́ндрович Бердя́ев; March 18 [O.S. March 6] 1874 – March 24, 1948) was a Russian political and also Christian religious philosopher who emphasized the existential spiritual significance of human freedom and the human person. Alternate historical spellings of his name in English include "Berdiaev" and "Berdiaeff", and of his given name as "Nicolas" and "Nicholas". Biography[edit]

The Brain on Improv Credit: Flickr user maistora One summer at the annual Bremen Music Festival in Germany, Robert Levin, a classical pianist, was in the midst of improvising a passionate and wild cadenza during Beethoven’s “C Major Piano Concerto.” A cadenza is a passage in a concerto during which the orchestra ceases and a soloist strikes out on his own, improvising within the style of the piece. Up until the early nineteenth century, many classical composers wrote space for these cadenzas within their works. Levin is one of a handful of musicians who has taken it upon himself to revive the practice of classical improvisation. He is world renowned for his ability to effortlessly extemporize in the styles of several composers, including Mozart, Beethoven, Schubert and Mendelssohn.

Top 10 Thinking Traps Exposed Our minds set up many traps for us. Unless we’re aware of them, these traps can seriously hinder our ability to think rationally, leading us to bad reasoning and making stupid decisions. Features of our minds that are meant to help us may, eventually, get us into trouble. Here are the first 5 of the most harmful of these traps and how to avoid each one of them. 1. The Anchoring Trap: Over-Relying on First Thoughts www.cs.virginia.edu/~an4m/fun/thoughtful-look A Thoughtful Look at Men and Women SHE DRIVES FOR A RELATIONSHIP. HE'S LOST IN THE TRANSMISSION By DAVE BARRY CONTRARY to what many women believe, it's fairly easy to develop a long-term, stable, intimate, and mutually fulfilling relationship with a guy. Of course this guy has to be a Labrador retriever.

Alfred Korzybski Alfred Habdank Skarbek Korzybski ([kɔˈʐɨpski]; July 3, 1879 – March 1, 1950) was a Polish-American independent scholar who developed a field called general semantics, which he viewed as both distinct from, and more encompassing than, the field of semantics. He argued that human knowledge of the world is limited both by the human nervous system and the languages humans have developed, and thus no one can have direct access to reality, given that the most we can know is that which is filtered through the brain's responses to reality. His best known dictum is "The map is not the territory". How To Treat Others: 5 Lessons From an Unknown Author Five Lessons About How To Treat People -- Author Unknown 1. First Important Lesson - "Know The Cleaning Lady" During my second month of college, our professor gave us a pop quiz. I was a conscientious student and had breezed through the questions, until I read the last one: "What is the first name of the woman who cleans the school?" Surely this was some kind of joke.

Politically Incorrect Human Nature Human nature is one of those things that everybody talks about but no one can define precisely. Every time we fall in love, fight with our spouse, get upset about the influx of immigrants into our country, or go to church, we are, in part, behaving as a human animal with our own unique evolved nature—human nature. This means two things. 5 Ways To Hack Your Brain Into Awesomeness Much of the brain is still mysterious to modern science, possibly because modern science itself is using brains to analyze it. There are probably secrets the brain simply doesn't want us to know. But by no means should that stop us from tinkering around in there, using somewhat questionable and possibly dangerous techniques to make our brains do what we want.

www.menshealth.com/mhlists/fighting_strategies/printer.php Truly passionate sex beats obligatory makeup sex any day. Maybe men don't feel the difference, but we women do. We hate fighting—it makes us feel alienated, confused, and downright disappointed. But the next time we bite your head off, don't rush to pack up your CDs. Experts insist that squabbling (but not screaming) is a healthy sign. It's silence that should scare you.

Victor Kandinsky Victor Khrisanfovich Kandinsky (Russian: Виктор Хрисанфович Кандинский) (April 6, 1849, Byankino, Nerchinsky District, Siberia – July 3, 1889, Saint Petersburg) was a Russian psychiatrist, and was 2nd cousin to famed artist Wassily Kandinsky.[1] He was born in Siberia into a large family of extremely wealthy businessmen.[2] Victor Kandinsky was one of the famous figures in Russian psychiatry and most notable for his contributions to the understanding of hallucinations.[3] Biography[edit] He graduated from Moscow Imperial University Medical School in 1872 and started to work as a general practitioner in one of the hospitals in Moscow.[4] In 1878 he married his medical nurse Elizaveta Karlovna Freimut (Russian: Елизавета Карловна Фреймут).[4] In October 1878, Victor again entered a psychiatric hospital.