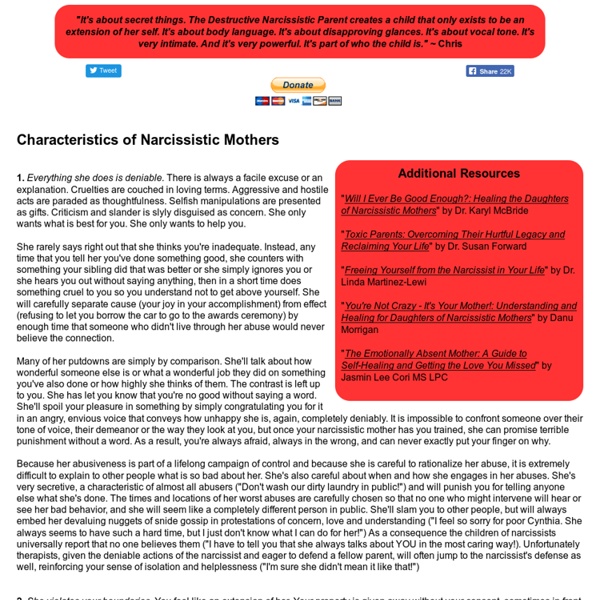 1. Everything she does is deniable. There is always a facile excuse or an explanation. Cruelties are couched in loving terms. Aggressive and hostile acts are paraded as thoughtfulness. She rarely says right out that she thinks you're inadequate. Many of her putdowns are simply by comparison. Because her abusiveness is part of a lifelong campaign of control and because she is careful to rationalize her abuse, it is extremely difficult to explain to other people what is so bad about her. 2. Any attempt at autonomy on your part is strongly resisted. 3. 4. 5. She will deliver generalized barbs that are almost impossible to rebut (always in a loving, caring tone): "You were always difficult" "You can be very difficult to love" "You never seemed to be able to finish anything" "You were very hard to live with" "You're always causing trouble" "No one could put up with the things you do." She minimizes, discounts or ignores your opinions and experiences. 6. Narcissists gaslight routinely. 7. Related:  Mental Health

20 Diversion Tactics Highly Manipulative Narcissists, Sociopaths And Psychopaths Use To Silence You Toxic people such as malignant narcissists, psychopaths and those with antisocial traits engage in maladaptive behaviors in relationships that ultimately exploit, demean and hurt their intimate partners, family members and friends. They use a plethora of diversionary tactics that distort the reality of their victims and deflect responsibility. Although those who are not narcissistic can employ these tactics as well, abusive narcissists use these to an excessive extent in an effort to escape accountability for their actions. Here are the 20 diversionary tactics toxic people use to silence and degrade you. 1. Gaslighting is a manipulative tactic that can be described in different variations of three words: “That didn’t happen,” “You imagined it,” and “Are you crazy?” When a narcissist, sociopath or psychopath gaslights you, you may be prone to gaslighting yourself as a way to reconcile the cognitive dissonance that might arise. 2. Solution? 3. 4. 5. 6. Do you have a successful career? 7.

Rejection Sensitive Dysphoria: How to Treat it Alongside ADHD Rejection sensitive dysphoria (RSD) is an extreme emotional sensitivity and emotional pain triggered by the perception — not necessarily the reality — that a person has been rejected, teased, or criticized by important people in their life. RSD may also be triggered by a sense of failure, or falling short — failing to meet either their own high standards or others’ expectations. Dysphoria is Greek for “difficult to bear.” It’s not that people with attention deficit disorder (ADHD or ADD) are wimps, or weak; it’s that the emotional response hurts them much more than it does people without the condition. When this emotional response is internalized, it can imitate a full, major mood disorder complete with suicidal ideation. It can take a long time for physicians to recognize that these symptoms are caused by the sudden emotional changes associated with ADHD and rejection sensitivity, while all other object relations are totally normal. Rejection sensitivity is hard to tease apart. 1. 2.