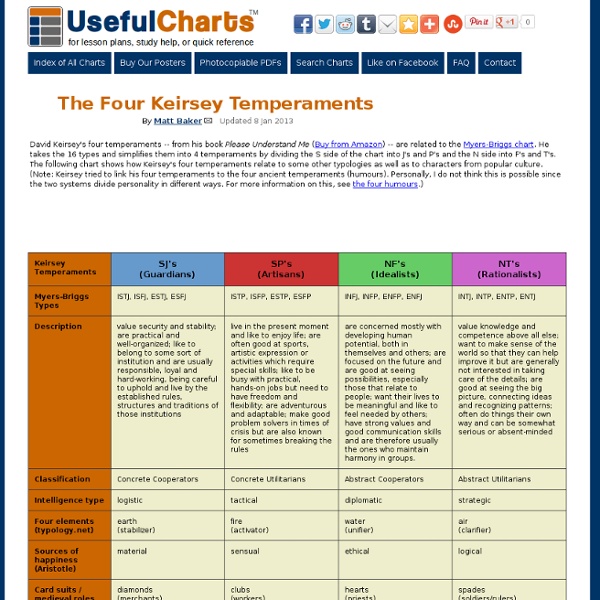 ISFJ This article is about the Myers-Briggs personality type. For the Socionics ISFj, see Ethical Sensory Introvert. ISFJ (Introversion, Sensing, Feeling, Judging) is an abbreviation used in the publications of the Myers-Briggs Type Indicator (MBTI) to refer to one of sixteen personality types.[1] The MBTI assessment was developed from the work of prominent psychiatrist Carl G. Jung in his book Psychological Types. Jung proposed a psychological typology based on the theories of cognitive functions that he developed through his clinical observations. The MBTI instrument[edit] The MBTI preferences indicate the differences in people based on the following:[5] By using their preference in each of these areas, people develop what Jung and Myers called psychological type. The MBTI tool consists of multiple choice questions that sort respondents on the basis of the four "dichotomies" (pairs of psychological opposites). I – Introversion preferred to extraversion: ISFJs tend to be quiet and reserved.

Integral Personality 8 Ways to Open Your Heart Chakra A balanced heart chakra is a beautiful thing. However, most of us—at one point or another—will encounter major blockages in this area. A myriad of life circumstances can cause problems for your heart center—from break-ups or health issues to low self-esteem. An unhealthy heart chakra can exhibit many signs and symptoms—including but not limited to being defensive, critical, controlling, suspicious, withdrawn, possessive and afraid of letting go. When in balance an open heart chakra displays acceptance in others, life and yourself. 1. 2. 3. 4. 5. 6. 7. 8. Opening the heart chakra after a period of grief or personal struggle is not easy.

Psychometric The Psychology Department has the following tests which may be used only by Psychology staff and students for testing purposes. They are available to be borrowed from Karen Fleet in the Psychology & Philosophy Library which is staffed 9-5 on weekdays during term-time. For more detailed information on which test is appropriate for your study please consult your supervisor or demonstrator. Also see International Personality Item pool for public domain personality tests. Tests fall into two categories: those which are made freely available by researchers and commercial tests. Psychometric Tests held by the Department Useful Tests on the Web Some useful reference works about tests and scales held in the Psychology Library Robinson, John P; Shaver, Phillip R and Wrightsman, Lawrence S(Eds) (1991) Measures of personality and social psychological attitudes.

PersonalDNA | Your True Self Revealed - Fast Fun Free Personality Tests 7 Morning Rituals That Will Change Your Life — Buddhaimonia When you arise in the morning, think of what a precious privilege it is to be alive – to breathe, to think, to enjoy, to love. – Marcus Aurelius It's been almost 4 years now since I began working to rewrite my bad sleeping habits. It was around that time that my first son Malik was born, and my personal time began to (really) take a nosedive. But it wasn't until my first son was born though that I had to heavily reevaluate my life and how I spent my time. For a while, I tried staying up extra late to work on my personal projects. One day, I ran into an old article about Zen Buddhist monks sleep schedules. The article talked a bit about the reasoning, mentioning some things such as the body's natural rhythm, the fact that apparently experienced meditators seemed to need less sleep, among other things. So I set out to do the unthinkable: I, the certified night owl since age 15, would begin waking up early. 7 Morning Rituals That Will Change Your Life 1. 2. 3. 4. 5. 6. 7.

Psych Experiments Psychology is the study of the human mind and mental processes in relation to human behaviors - human nature. Due to its subject matter, psychology is not considered a 'hard' science, even though psychologists do experiment and publish their findings in respected journals. Some of the experiments psychologists have conducted over the years reveal things about the way we humans think and behave that we might not want to embrace, but which can at least help keep us humble. That's something. 1. The Robbers Cave Experiment is a classic social psychology experiment conducted with two groups of 11-year old boys at a state park in Oklahoma, and demonstrates just how easily an exclusive group identity is adopted and how quickly the group can degenerate into prejudice and antagonism toward outsiders. Researcher Muzafer Sherif actually conducted a series of 3 experiments. 2. The prisoners rebelled on the second day, and the reaction of the guards was swift and brutal. 3. 4. 5. 6. 7. 8. 9. 10.