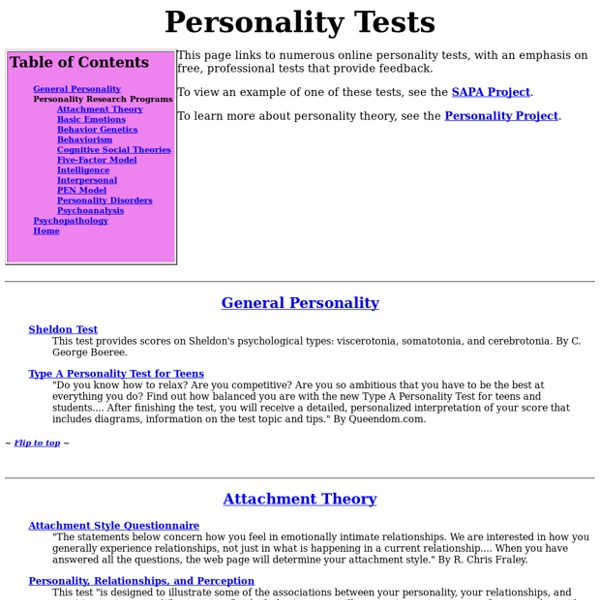 Personality Tests This page links to numerous online personality tests, with an emphasis on free, professional tests that provide feedback. To view an example of one of these tests, see the SAPA Project. To learn more about personality theory, see the Personality Project. General Personality Sheldon Test This test provides scores on Sheldon's psychological types: viscerotonia, somatotonia, and cerebrotonia. ~ Flip to top ~ Attachment Theory Attachment Style Questionnaire "The statements below concern how you feel in emotionally intimate relationships. Basic Emotions Anxiety Test After finishing this 10-item test, "you will receive a detailed, personalized interpretation of your score that includes diagrams, information on the test topic and tips." Behavior Genetics Sibling and Twin Relationships Survey "You will be asked to answer a variety of questionnaires about your relationships with your siblings and other family members. Behaviorism Cognitive Social Theories Five-Factor Model Intelligence Related:  phsycology

34 Lost Cities Forgotten by Time It’s hard to imagine how an entire city can get lost but that’s exactly what has happened to the lost cities on this list. There are actually many reasons why a city has to be abandoned. War, natural disasters, climate change and the loss of important trading partners to name a few. Whatever the cause, these lost cities were forgotten in time until they were rediscovered centuries later. 34Carthage Located in present-day Tunisia, Carthage was founded by Phoenician colonists and became a major power in the Mediterranean. See also: Tunisia Guide 33Ciudad Perdida Ciudad Perdida (Spanish for “Lost City”) is an ancient city in Sierra Nevada, Colombia, believed to have been founded around 800 AD. See also: Colombia Guide 32Troy Troy is a legendary city in what is now northwestern Turkey, made famous in Homer’s epic poem, the Iliad. See also: Turkey Guide 31Skara Brae Located on the main island of Orkney, Skara Brae is one of the best preserved Stone Age villages in Europe. 30Memphis 29Caral 28Babylon

Great Ideas in Personality--Theory and Research Swarm Theory I used to think ants knew what they were doing. The ones marching across my kitchen counter looked so confident, I just figured they had a plan, knew where they were going and what needed to be done. How else could ants organize highways, build elaborate nests, stage epic raids, and do all the other things ants do? Turns out I was wrong. Ants aren't clever little engineers, architects, or warriors after all—at least not as individuals. How do we explain, then, the success of Earth's 12,000 or so known ant species? "Ants aren't smart," Gordon says. Where this intelligence comes from raises a fundamental question in nature: How do the simple actions of individuals add up to the complex behavior of a group? One key to an ant colony, for example, is that no one's in charge.

Your True Self Revealed - Fast Fun Free Personality Tests This is your private report page. If you wish to share your results with your friends and family, use the links below. You have not saved your results to your account yet. If this is your report page and you wish to save your results, click here to sign in. You are an Advocating Creator. personalDNA about you You are a Creator If you want to be different: how you relate to others You are Advocating Your Personal DNA Maps Here are personalDNA maps that uniquely represent your personality. Advocating Creator To add this map to your website or blog, copy/paste this HTML into the body of a blog post or web page: Your Personality Chart »Glossary of Traits This chart shows thirteen personality traits. want to save your report to a personalDNA account? PersonalDNA is one of many ATTAP websites. By linking your personalDNA information to your account, you give yourself access to your report all the time. Click here to create your account Or, if you already have a personalDNA account, click here to sign in

We Showed 'Troll Physics' Comics to a Physics Professor. Here's His Reaction. Is it possible to "troll" the very laws of matter and motion that govern the universe for your own kinetic benefit? For example, can one survive a falling elevator by jumping up in the air at the last minute? Also, f*cking electromagnetism - how does it work? If you've pondered any of those questions before, the blog Troll Physics offers incredibly simple but impossible "hacks" for manipulating the laws of nature to yield infinite energy, money and/or sexual partners. Since this site is pretty much a physics teacher's worst nightmare, I cornered one to get his reaction. David Morgan, a natural science professor with a PhD in physics, was kind enough to bring some logic and rational discourse to this hilariously asinine pile of hot meme trash. DM: "Up" is not "North"...the only reasonable meaning for the word "up" is "in the opposite direction of the Earth's gravitational pull at the surface." DM: You don't really need a guy with a PhD to explain to you that bacon isn't a plant, right?

Color Psychology by David Johnson Like death and taxes, there is no escaping color. It is ubiquitous. Yet what does it all mean? Why are people more relaxed in green rooms? Colors often have different meanings in various cultures. Black Black is the color of authority and power. White Brides wear white to symbolize innocence and purity. Red The most emotionally intense color, red stimulates a faster heartbeat and breathing. The most romantic color, pink, is more tranquilizing. Blue The color of the sky and the ocean, blue is one of the most popular colors. Green Currently the most popular decorating color, green symbolizes nature. Yellow Cheerful sunny yellow is an attention getter. Purple The color of royalty, purple connotes luxury, wealth, and sophistication. Brown Solid, reliable brown is the color of earth and is abundant in nature. Colors of the Flag In the U.S. flag, white stands for purity and innocence. Food for Thought While blue is one of the most popular colors it is one of the least appetizing.

Bamboo Machine Setting up the "symbiosis" machine in the botanical garden´s tropical greenhouse. The "simbiosis" machine was built for the exhibition "Natürlich" (natural) that was shown in the public greenhouses of Hamburg´s botanical garden in 2009. I was always fascinated by the immense forces hidden in nature like small shoots cracking massive concrete and roots lifting up sidewalks. While looking for a way to make these slow but powerful processes perceptible I read about the growth rate of bamboo: In the tropics it grows up to 1.5 meters a day while having it´s final diameter right from the beginning. Therefore bamboo seemed to be the perfect energy source for a mechanical object. By limiting the machine´s functions to pumping water towards the bamboo the "symbiosis" also suggests a beneficial coexistence of nature and machines: We could try to find more sensitive ways to harvest the energy that is already there instead of just cutting plants down and burning them as fuel.