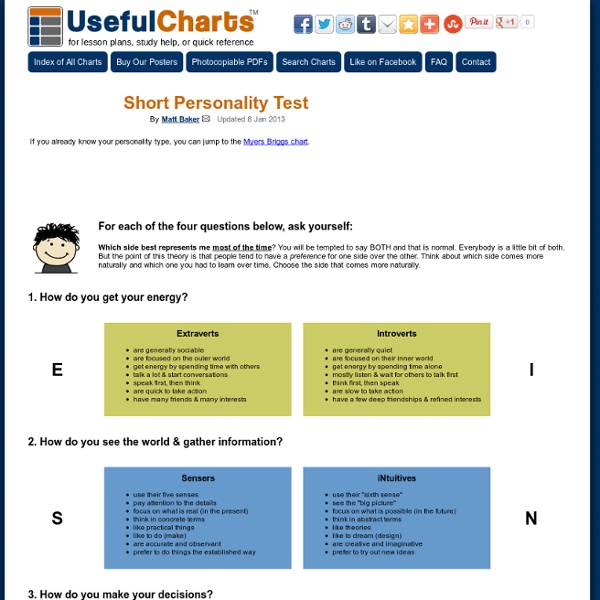 Psycology: Know Thyself I’ve decided to start a series called 100 Things You Should Know about People. As in: 100 things you should know if you are going to design an effective and persuasive website, web application or software application. Or maybe just 100 things that everyone should know about humans! The order that I’ll present these 100 things is going to be pretty random. Dr. <div class="slide-intro-bottom"><a href="

Psych Experiements Psychology is the study of the human mind and mental processes in relation to human behaviors - human nature. Due to its subject matter, psychology is not considered a 'hard' science, even though psychologists do experiment and publish their findings in respected journals. Some of the experiments psychologists have conducted over the years reveal things about the way we humans think and behave that we might not want to embrace, but which can at least help keep us humble. That's something. 1. The Robbers Cave Experiment is a classic social psychology experiment conducted with two groups of 11-year old boys at a state park in Oklahoma, and demonstrates just how easily an exclusive group identity is adopted and how quickly the group can degenerate into prejudice and antagonism toward outsiders. Researcher Muzafer Sherif actually conducted a series of 3 experiments. 2. The prisoners rebelled on the second day, and the reaction of the guards was swift and brutal. 3. 4. 5. 6. 7. 8. 9. 10.

Narcissistic Personality Inventory: Narcissism Test This is a interactive version of the Narcissistic Personality Inventory. Introduction Narcissism in personality trait generally conceived of as excessive self love. In Greek mythology Narcissus was a man who fell in love with his reflection in a pool of water. The NPI was developed by Raskin and Hall (1979) for the measurement of narcissism as a personality trait in social psychological research. It is based on the definition of narcissistic personality disorder found in the DSM-III, but is not a diagnostic tool for NPD and instead measures subclinical or normal expressions of narcissism. So, even someone who gets the highest possible score on the NPI does not necessarily have NPD. Procedure The test consists of forty pairs of statements. Participation Your use of this assessment must be strictly for educational purposes.

How to Find Your Purpose and Do What You Love “Find something more important than you are,” philosopher Dan Dennett once said in discussing the secret of happiness, “and dedicate your life to it.” But how, exactly, do we find that? Surely, it isn’t by luck. I myself am a firm believer in the power of curiosity and choice as the engine of fulfillment, but precisely how you arrive at your true calling is an intricate and highly individual dance of discovery. Still, there are certain factors — certain choices — that make it easier. Every few months, I rediscover and redevour Y-Combinator founder Paul Graham’s fantastic 2006 article, How to Do What You Love. What you should not do, I think, is worry about the opinion of anyone beyond your friends. More of Graham’s wisdom on how to find meaning and make wealth can be found in Hackers & Painters: Big Ideas from the Computer Age. Alain de Botton, modern philosopher and creator of the “literary self-help genre”, is a keen observer of the paradoxes and delusions of our cultural conceits.

Raise Teenage Girls Edit Article Making Her Feel Loved and UnderstoodPreparing for Tough SituationsBeing a Good Disciplinarian Edited by Katie, Maluniu, Livviswish, Oliver and 6 others Nobody said raising girls was easy -- especially not teenage girls. The cute and talkative preteen you once knew and loved may have morphed into a creature who is filled with complicated emotions, wanting to distance herself and to constantly challenge your authority. But don't worry -- many parents have raised healthy, independent teenage girls and have lived to tell the tale. Ad Steps Part 1 of 3: Making Her Feel Loved and Understood 1Give her space. 6Help your daughter maintain a healthy body image. Part 2 of 3: Preparing for Tough Situations 1Put safety first. 6Talk about smoking, drugs, and alcohol. Part 3 of 3: Being a Good Disciplinarian 1Don't try too hard to be a "cool" parent. 6Motivate your daughter with rewards, not threats. Tips Warnings

Help Your Teens Unlearn Abuse M’s Comment: …When I say…‘I am uncomfortable with that phrasing,’ … I am fine with explaining ‘That’s how I feel when I hear it’ [to own] my feelings [instead of labeling my children] etc. … But both my sons will then say they’re made uncomfortable by my objection; they have a right to express themselves in this ‘normal’ way and it’s a generational difference, or me being too fussy, … I can’t keep walking away from meals and conversations with my own sons! So usually I reason with them a while and then give up, allow the subject to be changed, and that looks as if I’m sulking or defeated (since they’re reading the conversation in winner/loser terms). ‘Defeated’ confirms that I was wrong in the first place.Besides never ‘winning’, I hate seeing them grow up without the live-and-let-live values of mutual respect that I have always taught them. First, M, you’re doing a wonderful job. My Children, Today Before I share my advice, I want you to know my experience with my own children.

Best Online Psychology Tests Want to know what’s really going on in your own head? The mental health Web site PsychCentral offers a list of the best online psychology tests. Some of these are used to collect data for research experiments, while others are skill tests or quizzes that offer personal insights. Here are a few of the best. 1. 2. 3. 4. 5. 6. And for even more insight, take PsychCentral’s own Sanity Score quiz, which is designed to assess aspects of your mental health, including your risk for depression, anxiety and other emotional disorders. For additional tests and more information about online psychology assessments, read the full PsychCentral article by clicking here.

Passive-aggressive behavior Passive-aggressive behavior is the indirect expression of hostility, such as through procrastination, sarcasm, hostile jokes, stubbornness, resentment, sullenness, or deliberate or repeated failure to accomplish requested tasks for which one is (often explicitly) responsible. For research purposes, the DSM-IV describes passive-aggressive personality disorder as a "pervasive pattern of negativistic attitudes and passive resistance to demands for adequate performance in social and occupational situations". Concept in different areas[edit] In psychology[edit] In psychology, passive-aggressive behavior is characterized by a habitual pattern of passive resistance to expected work requirements, opposition, stubbornness, and negativistic attitudes in response to requirements for normal performance levels expected of others. Passive-aggressive may also refer to a person who refuses to acknowledge their own aggression (in the sense of "agency"), and who manages that denial by projecting it.