Transforming our world: the 2030 Agenda for Sustainable Development 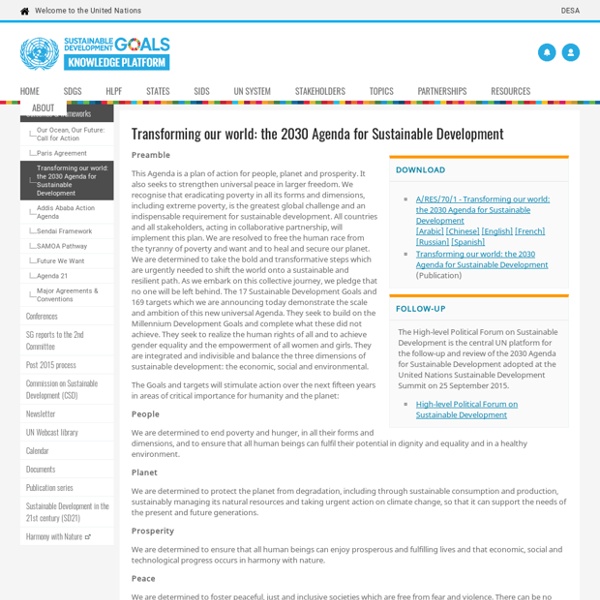 AGENDA 2030: SO NOW WHAT? The newly adopted Sustainable Development Goals (SDGs) represent the most ambitious effort yet to reduce poverty, tackle inequality and injustice, and protect the planet. That 193 States have all agreed to them is, by any measure, a huge achievement. Yet these goals will count for little if they remain just words on paper. When in New York, we all agreed that the true test of whether the 2030 Agenda lives up to expectations will come in its implementation. Full realisation of every goal and target by every state is essential if the promises of the SDGs are to lead to concrete results and improvements in the lives of children, especially girls, the world over. Not least because the goals of the Agenda are so interlinked and inter-dependent. Importantly, children and young people must be included in both designing the implementation plans of states and in ensuring that implementation is monitored effectively. That will require two things.

Land Use By: Henry Lamb - Sovereignty.net Ownership of land is the foundation of freedom in America. The hope of owning even a small plot of ground compelled our forefathers to brave incalculable risks crossing the ocean and challenging the wilderness. Land ownership was so cherished by our nation's founders that they guaranteed that government could not take private property without just compensation paid to the land owner. American Heritage Rivers Initiative The American Heritage Rivers Initiative was announced in 1997. ecognize selected rivers as "American Heritage Rivers" that would be governed by a stakeholders council that would be assigned a federal employee called a "River Navigator." objectives in a very general way.

Engadget is now a part of Verizon Media Engadget is part of Verizon Media. We and our partners will store and/or access information on your device through the use of cookies and similar technologies, to display personalised ads and content, for ad and content measurement, audience insights and product development. Your personal data that may be used Information about your device and internet connection, including your IP address Browsing and search activity while using Verizon Media websites and apps Precise location Find out more about how we use your information in our Privacy Policy and Cookie Policy. To enable Verizon Media and our partners to process your personal data select 'I agree', or select 'Manage settings' for more information and to manage your choices.

Amina Mohammed on the Sustainable Development Goals This weekend world leaders met at the United Nations in New York City to define a sustainable development agenda through 2030, a process built on the successes, failures and lessons learned from the Millennium Development Goals (MDGs) launched in 2000 and expiring at the end of this year. The new Sustainable Development Goals (SDGs) serve as a global framework of 17 goals designed to address humanity’s most pressing problems, from poverty and hunger to health, education, gender equality, energy, climate change and environmental sustainability. Earlier this month, TriplePundit spoke with Amina J Mohammed, the UN Secretary-General’s Special Advisor on Post-2015 Development Planning, about the process of defining these goals and turning words into action. The premise is simple: what kind of world do we want? The aspirations of a new century “Quite clearly we never would have embarked on this process if we hadn’t had some success from the first goal-setting that we did in 2000,” says Ms. Ms.

An Initiative of the SG Statement from the Secretary-General Education is a major driving force for human development. It opens doors to the job market, combats inequality, improves maternal health, reduces child mortality, fosters solidarity, and promotes environmental stewardship. Education empowers people with the knowledge, skills and values they need to build a better world. Growing up in the Republic of Korea as it recovered from war, I had few school supplies and studied in the open air. In almost all my visits to areas ravaged by war and disaster, the plea of survivors is the same: “Education first.” Despite the urgent need for investments in education and their clear returns, progress on this front has stalled in recent years. Education is a priority for people around the world, and it is my priority, too. The Initiative focuses on three priorities: First, putting every child in school. Second, improving the quality of learning. Third, fostering global citizenship.

Agenda 2030 – PROG The 2030 Agenda for Sustainable Development, adopted at the United Nations (UN) Sustainable Development summit in September 2015, was defined by the UN Secretary-General as an “Agenda for people”. Its key component, the Sustainable Development Goals (SDGs), derived from an intergovernmental process are considered by some as the most democratic and inclusive accomplishment in the history of the UN. It is no surprise that a stand-alone SDG – SDG14 – is dedicated to the oceans and their conservation and sustainable use. The oceans cover two thirds of the planet, provide food for billions of people, play a key role in climate regulation, host a large portion of biological diversity and enable vital economic activities. The 2030 Agenda therefore puts a healthy ocean at the core of the global sustainable development agenda and sets targets for tackling some of the most pressing issues facing the ocean, including overexploitation of natural resources, climate change and pollution.

Land swap deal made highway possible — Phillips News Land swap deal made highway possible — Phillips BY ALPHEA SAUNDERSSenior staff reportersaundersa@jamaicaobsever.comWednesday, May 10, 2017 The Opposition has offered an explanation in the fresh controversy surrounding acres of mainly prime Crown lands being given to the Chinese under a land-swap deal in a 50-year concession agreement with the Government of Jamaica for the construction of the north-south highway.Media reports of the absence of a valuation for 250 acres of land on the north coast that has already been transferred to China Harbour Engineering Company (CHEC) has also caught the attention of the contractor general, Dirk Harrison. At a press conference held at his offices yesterday, Opposition Leader Dr Peter Phillips argued that without the land deal the highway would not have been built. The Government has since been faced with intense criticism for what is seen as an untidy arrangement. He contended that the highway was a good deal for Jamaica.

NSA O'Brien makes good on Trump promise, releases previously redacted Russia document | Just The News National Security Adviser Robert O'Brien made good Friday on President Trump's transparency pledge in the Russia collusion case, releasing in its entirety a previously heavily redacted document from the Robert Mueller probe showing why Russian diplomats met with Trump in May 2017. The memo, which was originally released Wednesday with only three words visible, shows National Security Council official Eric Ciaramella wrote on May 10, 2017 that Trump chose to meet with Russian Foreign Minister Sergey Lavrov during a visit to Washington based on a request eight days earlier during a phone call with Russian president Vladimir Putin. "May 2, 2017: Putin asks POTUS to receive Lavrov when he stops through DC en route to Arctic Ministerial in Fairbanks, Alaska (a long­planned international meeting); POTUS agrees, and preparations begin," Ciaramella wrote fellow NSC official William R. Kelly, explaining the origins of the Lavrov meeting. You can see the unredacted version here:

SDG Education Targets UN Agenda 2030: A Recipe for Global Socialism The United Nations and its mostly autocratic member regimes have big plans for your life, your children, your country, and your world. And those plans are not limited to the coercive “climate” agreement recently concluded in Paris. While the establishment media in the United States was hyping ISIS, football, and of course “global warming,” virtually every national government/dictatorship on the planet met at the 70th annual General Assembly at UN headquarters in New York to adopt a draconian 15-year master plan for the planet. The master plan is comprised of 17 “Post-2015 Sustainable Development Goals” (SDGs) with 169 specific “targets” to be foisted on all of humanity — literally all of it, as the plan itself states explicitly. Officially dubbed “Agenda 2030,” the UN plot, as its full title suggests, is aimed at “transforming” the world. “This Agenda is a plan of action for people, planet and prosperity,” reads the preamble. The Agenda How much will Agenda 2030 cost? Yes, trillions.

Leaked Call Reveals Biden Risked National Security To Sabotage Trump A recently leaked phone call between then-Vice President Joe Biden and Ukrainian President Petro Poroshenko directly after the 2016 presidential election shows that Biden sought to sabotage the incoming Trump administration before Donald Trump even took office, and much worse. During the course of the call, Biden badmouthed the incoming administration, saying, “The truth of the matter is that the incoming administration doesn’t know a great deal about [Ukraine]” and that they were unprepared for the transition. This in itself is inappropriate, but it was meant to set the stage for Biden’s next statement and future plans. Biden then told Poroshenko, “I don’t plan on going away. The Logan Act bars private citizens from engaging in U.S. foreign policy, although its constitutionality remains questionable and no person has ever been convicted of violating it since it was signed into law in 1799. Alex Plitsas is a national security professional, Bronze Star Medal recipient, and U.S.

Episode 44: Naval Ravikant | End Games (part one) | Click to Listen — After On Many of these dangers could be enabled by near-term scientific & technological developments. In this, my first two-part episode (Part Two is coming up on Thursday), Naval and I particularly on focus risks connected to synthetic biology. This is ironic, in that as regular listeners know, I view synbio as being an especially exciting & promising field. But things could really go wrong here. Naval and I also touch more briefly on some of the dangers that could be posed by superintelligence research. Unusually, this episode is much more of a conversation than an interview. Because I’d developed a fairly detailed set of arguments in my essays, Naval initially suggested the episode might be a bit more like him interviewing me. Incidentally, if you're interested in reading those four essays on Medium, they are behind the site’s pay wall, and will be at least until November. Finally, the folks at Podcast Notes have written up a brilliant synopsis of this conversation.