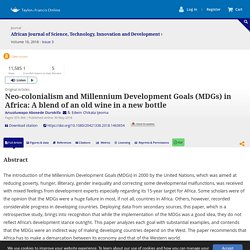 From the pervasive state of misery, disease, poverty and all forms of negativity that continue to plague the continent, it is clear that real development is yet to take place. Confronting this notion in the gross aftermath of colonial rule is disheartening but realistic. As much as the euphoria which followed the end of colonial rule had fizzled into thin air, its aftermath had been of an indirect overturn. Various neo-liberal strategies put in place by various African leaders to quicken development in Africa and put it on a path of sustainability have appeared vague and outside the African context, for example, the Structural Adjustment Programme [SAP] of 1986 (Shah 2001Shah, A. 2001. Twitter. This sight is bringing me tears (of hope)

*****SDG Graphic: How food connects all the SDGs - Stockholm Resilience Centre. The Sustainable Development Goals. Jonathan Andrews sur Twitter : "The SDGs are useful for an overarching curriculum intent, and for some elements of the geography curriculum, particularly at A level. Where do the more physical elements of geography for in e.g erosion and weathering/geolog. *****The Sustainable Development Goals.

We really wanted a @SpiceGirls reunion... but we REALLY, REALLY want an end violence against girls, quality education for everyone, an end to child marriage and equal pay for equal work! #Goal5… MILLENIUM DEVELOPMENT GOALS. SDG Scorecard: Sub-Saharan Africa progress needed to achieve goals. A new report reveals the scale of the challenges facing sub-Saharan Africa if it is to hit its sustainable development targets, with most countries scoring badly across almost all goals There is no doubt the UN’s Sustainable Development Goals (SDGs) are ambitious, yet most countries in sub-Saharan Africa have a lot of progress to make if they are to get even close to hitting their targets by 2030. 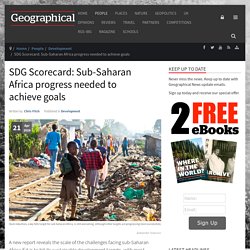 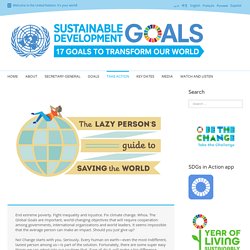 Fight inequality and injustice. Fix climate change. Whoa. The Global Goals are important, world-changing objectives that will require cooperation among governments, international organizations and world leaders. It seems impossible that the average person can make an impact. No! We’ve made it easy for you and compiled just a few of the many things you can do to make an impact. *****Teachers are nation-builders. Developing countries must invest in them properly. *****How much do you know about global issues? GLP. *****The Worlds Largest Lesson Introduced by Malala Yousafzai. *****Voices of Youth: In Order to Achieve the SDGs.

In order to achieve the Sustainable Development Goals we need to start including young people today.The global workforce will be 75% millennials by 2025.This is a 15-year long project that young people cannot afford to inherit, it needs to be co-created since the millennial generation will be tasked with its execution. 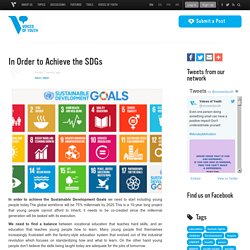 We need to find a balance between vocational education that teaches hard skills, and an education that teaches young people how to learn. Many young people find themselves increasingly frustrated with the factory-style education system that evolved out of the industrial revolution which focuses on standardizing how and what to learn. On the other hand young people don’t believe the skills being taught today are adequate for the jobs of tomorrow. Young people need to make their voices heard by speaking up and not being afraid to express their hopes and desires. Youth should be seen as employers, not just employees thanks to the rise of young entrepreneurs. Science is helping save the world, one SDG at a time. *****World Poverty Clock. 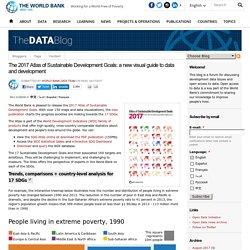 With over 150 maps and data visualizations, the new publication charts the progress societies are making towards the 17 SDGs. The Atlas is part of the World Development Indicators (WDI) family of products that offer high-quality, cross-country comparable statistics about development and people’s lives around the globe. You can: The 17 Sustainable Development Goals and their associated 169 targets are ambitious. They will be challenging to implement, and challenging to measure. Trends, comparisons + country-level analysis for 17 SDGs For example, the interactive treemap below illustrates how the number and distribution of people living in extreme poverty has changed between 1990 and 2013. Most people, whether rich or poor, are totally wrong about poverty. The percentage of people living in extreme poverty around the world has fallen by more than half over the past three decades. 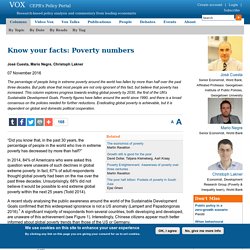 But polls show that most people are not only ignorant of this fact, but believe that poverty has increased. This column explores progress towards ending global poverty by 2030, the first of the UN’s Sustainable Development Goals. Poverty figures have fallen around the world since 1990, and there is a broad consensus on the policies needed for further reductions. Eradicating global poverty is achievable, but it is dependent on global and domestic political cooperation. Sustainable Development Goals: one year on but are we any closer?

Global health: How far have we come? And how much more do we have to do? Kofi Annan, the former Secretary-General of the United Nations, observed that knowledge is power and information is liberating. 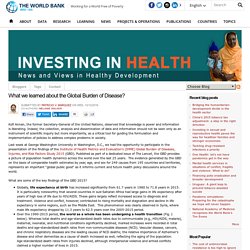 Indeed, the collection, analysis and dissemination of data and information should not be seen only as an instrument of scientific inquiry but more importantly, as a critical tool for guiding the formulation and implementation of policies to address complex problems in society. Last week at George Washington University in Washington, D.C., we had the opportunity to participate in the presentation of the findings of the Institute of Health Metrics and Evaluation’s (IHME) Global Burden of Diseases, Injuries, and Risk Factors Study 2015 (GBD). No more 'developing countries' The world can defeat poverty by 2030 – but only if it does this.

Unless governments do more to improve the quality of jobs, the UN’s goal of ending poverty by 2030 will not be met, a new report by the International Labour Organisation (ILO) finds. 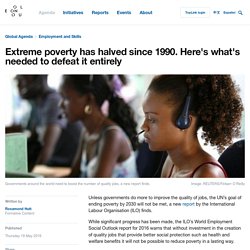 While significant progress has been made, the ILO’s World Employment Social Outlook report for 2016 warns that without investment in the creation of quality jobs that provide better social protection such as health and welfare benefits it will not be possible to reduce poverty in a lasting way. Image: ILO What will it take to end poverty? Extreme poverty rates have halved since 1990, when initial international commitments to reduce poverty were undertaken. Nearly 2 billion people – around 36% of the emerging and developing world’s population – live on less than the “moderate poverty threshold” of $3.90 a day. The UN’s Sustainable Development Goals (SDGs), adopted in September 2015, include ending poverty in all its forms everywhere by 2030.