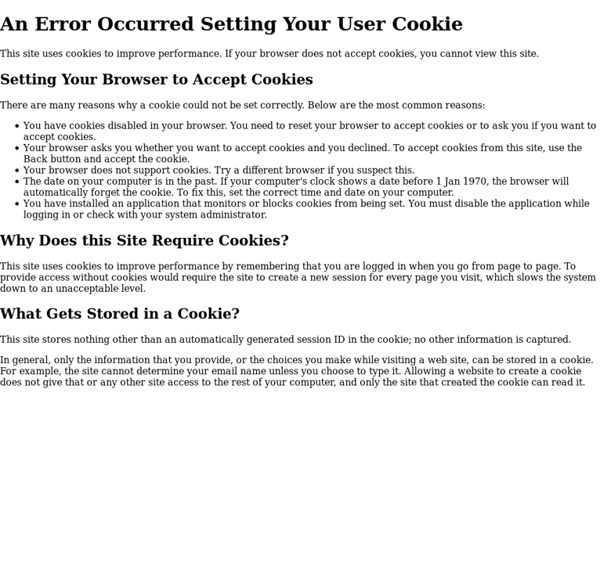 This site uses cookies to improve performance. If your browser does not accept cookies, you cannot view this site. Setting Your Browser to Accept Cookies There are many reasons why a cookie could not be set correctly. You have cookies disabled in your browser. Why Does this Site Require Cookies? This site uses cookies to improve performance by remembering that you are logged in when you go from page to page. What Gets Stored in a Cookie? This site stores nothing other than an automatically generated session ID in the cookie; no other information is captured. In general, only the information that you provide, or the choices you make while visiting a web site, can be stored in a cookie. Related:  WHO and global governance

World lagging behind on global health targets, researchers warn | Global development According to the report, published in the Lancet, no country has met any of the nine global health targets – including the elimination of major disease epidemics and the reduction of health issues like childhood obesity and intimate partner violence – laid down as part of the UN’s sustainable development agenda. The study provides the first independent analysis of performance on sustainable development goal three, which calls on the world to “Ensure healthy lives and promote wellbeing for all at all ages”. The health SDG is one of 17 universal goals that replaced the millennium development goals (MDGs) after they expired at the end of 2015. “This paper on the SDGs represents a baseline that informs health policy and decision-makers in all countries, as well as the UN,” said Dr Christopher Murray, director of Seattle’s Institute for Health Metrics and Evaluations (IHME), which led the study. Even developed countries, including the UK and US, did badly in certain areas.

Global Health - Global Health Security - Why It Matters Disease Threats Can Spread Faster and More Unpredictably Than Ever Before People are traveling more. Food and medical product supply chains stretch across the globe. Biological threats (such as Middle East respiratory syndrome coronavirus, or MERS-CoV) and drug-resistant illnesses pose a growing danger to people everywhere, whether diseases are naturally occurring, intentionally produced, or the result of a laboratory accident. In today’s interconnected world, poorly treated cases of TB or pneumonia in Asia and Africa have shown up in U.S. hospitals within days. Emerging global disease threats have created the opportunity to forge new global solutions such as the International Health Regulations (IHR), signed by all 194 member states of the World Health Organization. We Are Not Yet Safe There is much more to be done. Global Health Security Provides Protection From Infectious Disease Threats A disease threat anywhere can mean a threat everywhere. Global Health Security Is Economically Smart

WHO elects first ever African director-general after tense vote | World news The World Health Organisation has its first ever director-general from Africa, after the election of Dr Tedros Adhanom Ghebreyesus, the former Ethiopian health minister. Dr Tedros, as he is known, beat the British candidate, Dr David Nabarro, after three tense rounds of voting on Tuesday. Third was Pakistan’s Dr Sania Nishtar. The decision by member states came at the World Health Assembly in Geneva after a fraught campaign. Dr Tedros was well-regarded, particularly by aid donors, for his stewardship of health in the Ethiopian government from 2005 to 2012. In the latter stages of the campaign, however, there were allegations about the human rights record and lack of transparency of the government of which he was a member. Dr Nabarro’s pitch for power rested on his long career at the UN, where he has played a trouble-shooting role in a number of epidemics. The campaign to lead the WHO has been long and hard fought.

Governing the UN Sustainable Development Goals: interactions, infrastructures, and institutions Three of the eight Millennium Development Goals (MDGs) concerned health. There is only one health goal in 17 proposed Sustainable Development Goals (SDGs). Critiques of the MDGs included missed opportunities to realise positive interactions between goals.1 Here we report on an interdisciplinary analytical review of the SDG process, in which experts in different SDG areas identified potential interactions through a series of interdisciplinary workshops. This process generated a framework that reveals potential conflicts and synergies between goals, and how their interactions might be governed. In our framework, the 17 SDGs are represented in three concentric layers, reflecting their main intended outcomes (figure). This organisation of proposed SDGs reveals problems and possibilities for the linking of health with other goals. The institutional structures for delivering wellbeing goals stem from the historical role of states in providing health, education, and welfare.

Overseeing Global Health -- Finance & Development, December 2014 Finance & Development, December 2014, Vol. 51, No. 4 Devi Sridhar and Chelsea Clinton PDF version New actors, with new priorities, are crowding a stage the World Health Organization once had to itself The recent outbreak in west Africa of the highly infectious and often fatal Ebola virus highlights the need for global cooperation in health. The Ebola outbreak is precisely the type of crisis world governments had in mind when they founded the World Health Organization (WHO) in 1948 and placed it at the center of global health governance.­ The fight against Ebola, which the WHO declared an international emergency in August 2014, requires careful reporting of the spread of the disease to allow authorities to track it, concerted international efforts to contain it, and resources to treat those infected. Global governance requires governments to forgo aspects of their sovereignty by delegating certain prerogatives and authority to an international agency such as the WHO. A growing crowd

Econometrics of suffering: Health policy, economics & human life — GLOBAL HEALTH GOVERNANCE PROGRAMME Econometrics is the application of statistical and mathematical methods in the field of economics to describe the numerical relationships between key economic forces such as capital, interest rates and labour. In the push to convince Bank managers to fund nutrition, a metrics of nutrition was created in which theoretical models were used to draw relationships between nutritional gains, labour, discount rates and productivity. Using these models, the previously unquantifiable such as the value of years of lost life, or disability-free life years could be numerically expressed and thus be entered into calculations. This dialogue is the only one that is permitted and used in the Bank. This can be viewed as an econometrics of suffering, the situation where mathematical analysis of production relationships was used to determine the magnitude of nutritional deprivation which provides justification for spending to alleviate this destitution.

Related:
Related:  WHO and global governance