Things That Are Not In the U.S. Constitution 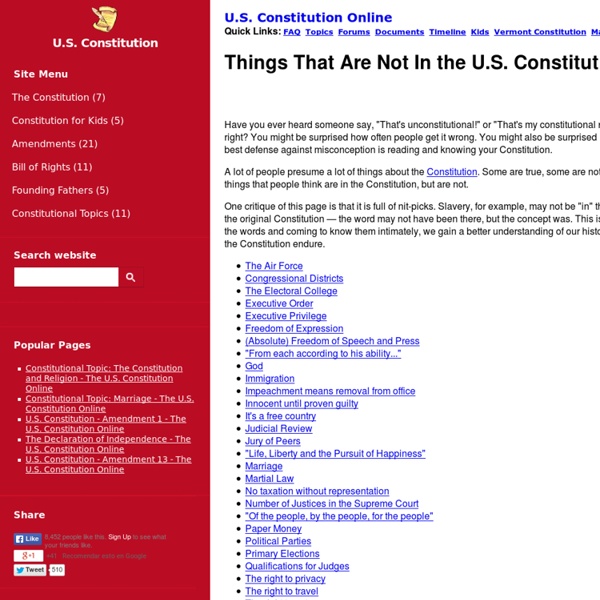 Have you ever heard someone say, "That's unconstitutional!" or "That's my constitutional right!" and wondered if they were right? You might be surprised how often people get it wrong. You might also be surprised how often people get it right. Your best defense against misconception is reading and knowing your Constitution. A lot of people presume a lot of things about the Constitution. One critique of this page is that it is full of nit-picks. The Air Force The Constitution was ratified in 1787, long, long before the advent of the airplane. Congressional Districts Congressional Districts divide almost every state in the United States into two or more chunks; each district should be roughly equal in population throughout the state and indeed, the entire country. The Electoral College The concept of the presidential elector is certainly in the Constitution, but never is the group of people collectively referred to as "The Electoral College." Executive Orders Executive Privilege God Marriage URL:

Diary of Soviet ambassador to London rewrites history of World War II Stalin’s terror and purges of the 1930s discouraged any Soviet official from putting a pen to paper, let alone keep a personal diary. The sole exception is the extraordinarily rich journal kept by Ivan Maisky, the Soviet ambassador to London between 1932 and 1943, which I unearthed in the archives of the Russian Foreign Ministry in Moscow. No personal document of such breadth, value and size has ever emerged from the Soviet archives. For the last decade I have scrupulously edited and checked the diary against a vast range of Russian and Western archival material as well as personal papers to allow the wider public access to this remarkable relic. At the epicentre of the dramatic events leading to World War II, Maisky was possessed with a passion to leave behind his own account.

All About Anarchism This classic statement of anarchism was written by a diverse group of anarchists in Cardiff around 1980 and it is an interesting historical record of the optimism of mainstream anarchist thought at that time. There is probably more rubbish talked about anarchism than any other political idea. Actually, it has nothing to do with a belief in chaos, death and destruction. How to Be an Anarchist: 13 Steps (with Pictures Edit Article Edited by Sara, Andy Zhang, Ben Rubenstein, Versageek and 42 others Anarchism does not mean philosophy; it does not mean theory, intellect, etc. Anarchism means belief and tranquility to all.

Why doesn't Russia make a big deal about its role in liberating Nazi Holocaust death camps? The documentary Night will Fall tells the story of German Concentration Camps Factual Survey, a film made by the Allied forces who filmed the scenes of the Nazi concentration camps as they liberated them. The film was intended to be shown to the German public immediately after World War II, but could not be finished. The part that was not completed depicted the camps of Majdanek and Auschwitz, liberated by the Soviet Red Army and filmed by Soviet camera crews. The Soviets' role in liberating those camps, and the newsreels they made about them, became problematic for the British team making the documentary as the Soviet Union moved from being seen as a wartime ally to a Cold War adversary. Only now has the film been restored. But even today, the Soviet section posed the Imperial War Museum team in the UK a challenge.

Individualist anarchism Overview[edit] Individualist anarchism of different kinds have a few things in common. These are: Commemoration of WWII casualties in Belarus On 22 June 2015, the President of Belarus, Alexander Lukashenko opened a new memorial complex at the site of the former extermination camp Maly Trostenets near Minsk. Between 1941 and 1944, German occupants and their helpers interned and killed up to 206,500 people in this camp and in the nearby forest of Blagovshchina. The memorial complex marks the site of the largest extermination camp in German-occupied Soviet territories, but also commemorates victims throughout Belarus and its six oblasty (regions). The opening ceremony marked a milestone for Belarus’ memory of the Nazi genocide. While the victory of Soviet troops over the Nazi regime has formed the core of republican and national identity—first in the Belarusian Socialist Soviet Republic (BSSR), and the Republic of Belarus since 1991—the systematic extermination of civilians has often retreated into the background of official commemorations.

Zen Habits “We have more possibilities available in each moment than we realize.” - Thich Nhat Hanh By Leo Babauta I’m not a Zen monk, nor will I ever become one. However, I find great inspiration in the way they try to live their lives: the simplicity of their lives, the concentration and mindfulness of every activity, the calm and peace they find in their days. You probably don’t want to become a Zen monk either, but you can live your life in a more Zen-like manner by following a few simple rules. Studio Musicians and 1960s Popular Music Industry The popular music industries of the 1960s produced thousands of recordings with each studio relying on an infrastructure of producers, engineers, music directors, songwriters, and, of course, musicians. In recent years, documentaries have introduced us to instrumentalists and singers who formed the artistic backbones of America’s major studios. In Detroit, The Funk Brothers kept Motown’s assembly line of hits purring for The Supremes, The Four Tops, The Temptations, and many others. In Los Angeles, the so-called Wrecking Crew gave us the instrumental backing for The Beach Boys, The Byrds, and The Mamas and the Papas, to name only a few. Indeed, every major studio relied on such professionals, whether in Muscle Shoals, Memphis, Chicago, or New Orleans. And the same was true on the other side of the Atlantic in London.