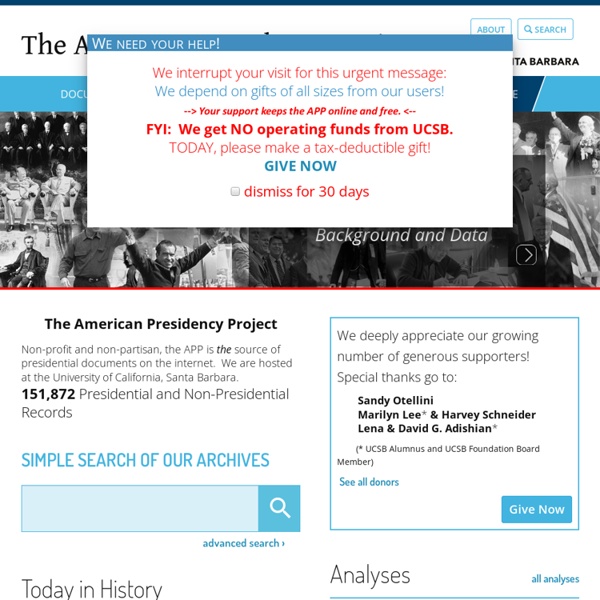 SoJust.net: Social Justice and Civil Rights Speeches Bella AbzugPlenary Address, Fourth World Congress on Women (1995) John AdamsInaugural Address (1797) Jane AddamsThe Subjective Necessity for Social Settlements (1892)The Modern Lear (1896) Susan B. AnthonyOn Women's Right to Vote (1872) The nine most touching photos from Barack Obama's eight years as president Official White House photographer Pete Souza is charged with documenting Barack Obama's two terms in office. Thanks to the rise of social media networks since Obama became president, people around the world have been privy to some of the funniest and most intimate moments of life in the Oval Office and beyond. Souza's Instagram feed has been a joy to behold. When Dissent Became Treason America and the Great War: A Library of Congress Illustrated History by Margaret E. Wagner, with an introduction by David M. Kennedy

Future - How liars create the ‘illusion of truth’ “Repeat a lie often enough and it becomes the truth”, is a law of propaganda often attributed to the Nazi Joseph Goebbels. Among psychologists something like this known as the "illusion of truth" effect. Here's how a typical experiment on the effect works: participants rate how true trivia items are, things like "A prune is a dried plum". Sometimes these items are true (like that one), but sometimes participants see a parallel version which isn't true (something like "A date is a dried plum"). After a break – of minutes or even weeks – the participants do the procedure again, but this time some of the items they rate are new, and some they saw before in the first phase.

After Orlando, Examining the Gun Business - The New Yorker Bars in the Old City neighborhood of Philadelphia let out at 2 A.M. On the morning of January 17, 2010, two groups emerged, looking for taxis. At the corner of Market and Third Street, they started yelling at each other. Feeding America Feeding America: The Historic American Cookbook Project The Project The Feeding America project has created an online collection of some of the most important and influential American cookbooks from the late 18th to early 20th century. The African American Odyssey: A Quest for Full Citizenship The exhibition The African American Odyssey: A Quest for Full Citizenship, showcases the incomparable African American collections of the Library of Congress. Displaying more than 240 items, including books, government documents, manuscripts, maps, musical scores, plays, films, and recordings, this is the largest black history exhibit ever held at the Library, and the first exhibition of any kind to feature presentations in all three of the Library's buildings. The major presentation in the Jefferson Building, The African American Odyssey: A Quest for Full Citizenship, explored black America's quest for equality from the early national period through the twentieth century. The items in this exhibit attest to the drama and achievement of this remarkable story.

The KKK was a pyramid scheme exploiting racism for money — Quartz The 1920s KKK made a lot of money selling robes, memorabilia, candy, and life insurance policies to its own members Today, the Ku Klux Klan is one of the most extreme and reviled symbols of American racism. But there was once a time when the fringe hate group verged on “mainstream.” In the 1920s, its members numbered in the millions and made up a significant percentage of the US population. The United States and the Making of Nazi Race Law’ To get to the core of race in America today, read this new book by James Whitman. Whitman is the Ford Foundation Professor of Comparative and Foreign Law at Yale Law School. Prepare to be as startled as this respected legal scholar was when he came upon a meticulous record of a meeting of top lawyers in Nazi Germany after Hitler’s rise to power. Not only did those lawyers reveal a deep interest in American race policies, the most radical of them were eager advocates of using American law as a model. Scholars and historians have argued for years about whether American’s own regime of racial oppression in any way inspired the Nazis.

Archive containing over 77,000 documents related to the study of the Presidency. by nda_librarian Apr 30