7415ijcsit01.pdf. Online Education May Be Poised To Take Off - ReadWrite. This post appears courtesy of the Ferenstein Wire, a syndicated news service. 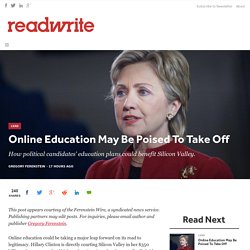 Publishing partners may edit posts. For inquiries, please email author and publisher Gregory Ferenstein. Online education could be taking a major leap forward on its road to legitimacy. Hillary Clinton is directly courting Silicon Valley in her $350 billion scheme to overhaul higher education, in a plan that may finally bridge the gap between Internet-channeled coursework and accredited higher education. Clinton's campaign, which provided the major tenets to news outlets, has the overarching goal to reduce student debt and lower the cost of education. 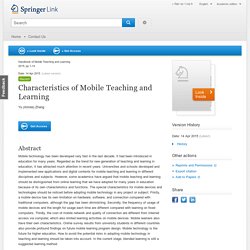 However, some academics have argued that mobile teaching and learning should be distinguished from online learning that we have adopted for many years in education because of its own characteristics and functions. The special characteristics for mobile devices and technologies should be noticed before adopting mobile technology in any project or subject. » The Internet of Education Things (part 1) I Am Learner. This is the 1st part of a 2-part post. 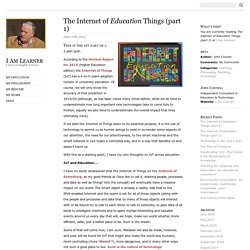 According to the Horizon Report for 2015 (Higher Education edition) the Internet of Things (IoT) has a 4-to-5-years adoption horizon in university education. Of course, we will only know the accuracy of that prediction in 2019/20 (although, as has been noted many times before, while we do tend to underestimate how long important new technologies take to come fully to fruition, equally we also tend to underestimate the overall impact that they ultimately have). If we distil the Internet of Things down to its essential purpose, it is the use of technology to permit us as human beings to yield or surrender some aspects of our attention, the need for our attentiveness, to the smart machines and the smart network in (we hope) a controlled way, and in a way that benefits us and doesn’t harm us.

With this as a starting point, I have my own thoughts on IoT across education. IoT and Education…. Kids Compete to Read and Everyone Wins - LightSailLightSail: Revolutionizing Reading. We are pleased to share this piece by guest author Monique Choyce, a teacher using LightSail in Los Angeles, CA. 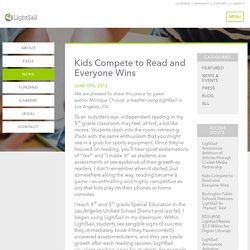 To an outsider’s eye, independent reading in my 5th grade classroom may feel, at first, a bit like recess. Students dash into the room, retrieving iPads with the same enthusiasm that you might see in a grab for sports equipment. Once they’re focused on reading, you’ll hear quiet exclamations of “Yes!” BBC World Service - The Forum, Cloud Education: The Future of Learning. Rise of robot reporters: when software writes the news - tech - 21 March 2014. Just three minutes after an earthquake hit California on Monday, the Los Angeles Times broke the story on its website. 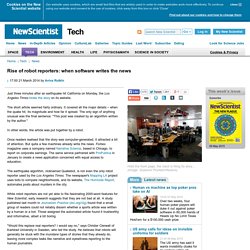 The short article seemed fairly ordinary. It covered all the major details – when the quake hit, its magnitude and how far it spread. The only sign of anything unusual was the final sentence: "This post was created by an algorithm written by the author. " In other words, the article was put together by a robot. Once readers realised that the story was computer-generated, it attracted a bit of attention. India, EU strike new 'Digital India' partnership. Brussels: India and the European Union (EU) Wednesday forged a new digital partnership and discussed potential for collaboration in the fields of technology and innovation besides cooperation to create smart cities. 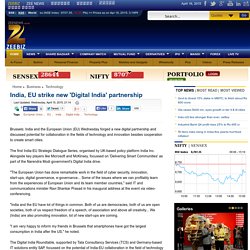 The first India-EU Strategic Dialogue Series, organised by UK-based policy platform India Inc. Alongside key players like Microsoft and McKinsey, focussed on 'Delivering Smart Communities' as part of the Narendra Modi government's Digital India drive. Virtual reality looks for a role in journalism - BBC News. I recently visited a refugee camp for Syrians, spending time in the home of 12-year-old Sidra, accompanying her to a makeshift school, meeting her friends and watching children playing football on a rubble pitch or pass the time in a woefully ill-equipped gym. 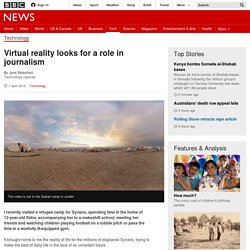 It brought home to me the reality of life for the millions of displaced Syrians, trying to make the best of daily life in the face of an uncertain future. But I did not go to Jordan, where the Zaatari camp is based, to experience all this. Instead I made my visit via a virtual reality (VR) headset at the Ted (Technology, Entertainment and Design) conference in Vancouver. Film-maker Chris Milk spoke at the event in the Canadian city about how he wanted to use technology as an empathy tool - and delegates got a chance to watch for themselves the film that his team had made. Virtual Reality- Can it be Used in Journalism? Virtual reality is gradually being used in different sectors, apart from gaming. 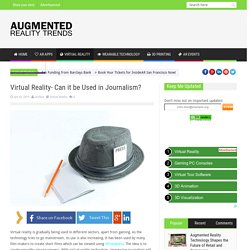 As the technology tries to go mainstream, its use is also increasing. It has been used by many film-makers to create short films which can be viewed using VR headsets. The idea is to create empathy among viewers. With virtual reality technology, immersive journalism will become popular in the near future. It can be used as an effective medium of storytelling. Bellingcat's Eliot Higgins: Citizen journalists need to be obsessive but not crazy. LONDON — Brown Moses and Bellingcat founder Eliot Higgins has revealed what it takes to become a citizen journalist. 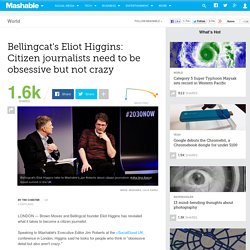 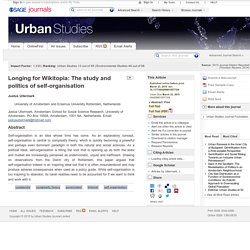 Email: justusuitermark@hotmail.com Abstract Self-organisation is an idea whose time has come. As an explanatory concept, self-organisation is central to complexity theory, which is quickly becoming a powerful and perhaps even dominant paradigm in both the natural and social sciences. As a political ideal, self-organisation is filling the void that is opening up as both the state and market are increasingly perceived as undemocratic, unjust and inefficient. 20 Augmented Reality Experiments in Education. Have you looked into augmented reality and what is being done with it to redefine education? I found this blog post from onlineuniversities.com very interesting. We are usually focused on how social learning (LMS) technology is making a difference in training and education programs in organizations of all sizes, anywhere in the world, but it is important to stay on top of creative trends growing in popularity.

E-governance innovation: Barriers and strategies. How Virtual Reality Could Revolutionize Journalism - ReadWrite. The man in the car next to me is on the phone with the police. Just beyond him on the grass, a teenager in a hoodie is moving erratically. He takes off and the man chases after him, despite the police urging him to sit tight. It is, of course, the story of Trayvon Martin and George Zimmerman.

In the three years since Martin's death, the #blacklivesmatter movement that sprung up in its wake has gone international and come to encompass many more unjust killings. It's a story with which Americans have become sadly familiar. Augmented Reality in TEDx: Getting Children “Real World Ready” If 21st Century education has taught us anything, it’s that theory isn’t enough anymore (maybe it never really was). With facts and figures readily available to anyone, at any time, the real test of an effective learner is how well he or she can take what’s been taught and apply it to everyday life.

Educational technology developers are chiefly concerned with this, and most new products, including those that enable teachers to use augmented reality in the classroom, are designed to facilitate hands-on, applied learning. Se Facebook entra in classe, ecco come usarlo a lezione. Online courts proposed to handle minor legal disputes in the UK. Few people like being swept up in a legal dispute. Whether it's a small disagreement or a bitter financial feud, once the courts are involved everything becomes a slow, stressful and potentially expensive mess. That's why the UK's Civil Justice Council (CJC) is proposing a new online system that would deal specifically with "low value" cases.