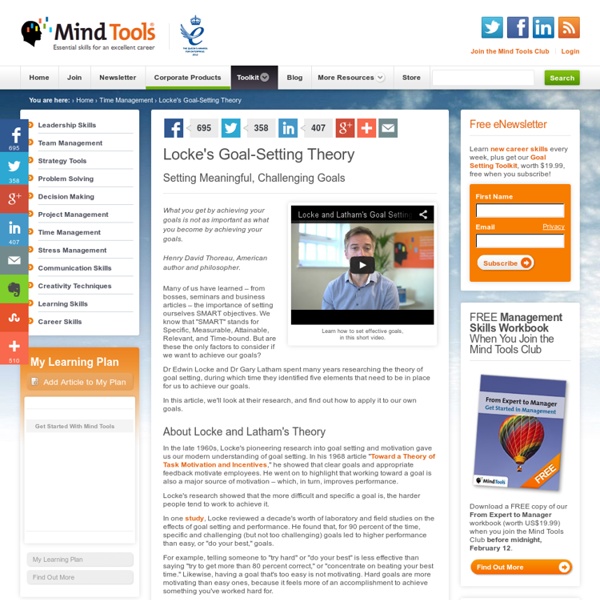 Setting Meaningful, Challenging Goals Learn how to set effective goals, in this short video. What you get by achieving your goals is not as important as what you become by achieving your goals.Henry David Thoreau, American author and philosopher. Many of us have learned – from bosses, seminars and business articles – the importance of setting ourselves SMART objectives. Dr Edwin Locke and Dr Gary Latham spent many years researching the theory of goal setting, during which time they identified five elements that need to be in place for us to achieve our goals. In this article, we'll look at their research, and find out how to apply it to our own goals. About Locke and Latham's Theory In the late 1960s, Locke's pioneering research into goal setting and motivation gave us our modern understanding of goal setting. Locke's research showed that the more difficult and specific a goal is, the harder people tend to work to achieve it. Locke and Latham's Five Principles 1. How to set Clear Goals 2. 3.

Pomodoro Technique Time management method A Pomodoro kitchen timer, after which the method is named. The Pomodoro Technique is a time management method developed by Francesco Cirillo in the late 1980s.[1] The technique uses a timer to break down work into intervals, traditionally 25 minutes in length, separated by short breaks. Each interval is known as a pomodoro, from the Italian word for 'tomato', after the tomato-shaped kitchen timer that Cirillo used as a university student.[2][3] The technique has been widely popularized by dozens of apps and websites providing timers and instructions. Description[edit] There are six steps in the original technique: For the purposes of the technique, a pomodoro is the interval of time spent working.[1] After task completion in a pomodoro, any time remaining should be devoted to activities for instance: Review your work just completed.Review the activities from a learning point of view (ex: What learning objective did you accomplish? Cirillo suggests: Tools[edit]

Improve Your Money Skills with These Free Resources I feel like I understand my budgeting flaws and how to do it better. My issue is "What do you do with your budget when you and your wife are both working full time jobs and you still can't make your bills each month?" It isn't like I can just step into a better job, regardless of ambition. I have skills and references, they just aren't doing anything for me. I've made 20 dollars an hour, now I'm pulling just under 10 dollars an hour. Fuck this awful economy and layoffs. Erg. I appreciate the reply, and I look forward to the post. Thanks!

Learn to Invest: Learn how to buy stocks and how to invest Situational Leadership and Coaching Much of the content of this post comes from my girlfriend’s masters thesis on the subject though it is quite relevant to our industry as we seem to use many words wrong and have some misguided ideas. Many people talk about coaching within teams. Hell you can go just about anywhere to find an “agile coach”. We might for instance want to go to the We LOVE coaching in our industry. However coaching is just one tool amongst many in our belt and is actually non-effective at times. At a talk recently I heard that we should always be coaching within our teams. Situational Leadership defines four learning mechanisms. Direction: where a learner is given tasks and direction Coaching: where the learner is doing the task Supporting: where the learner is doing the task but lacks confidence Delegating: where the learner is no longer a learner but is actually doing the task We have a tendency of applying “coaching” all the way through the process. Getting Started Coaching

Tutorials Ponzimonium After Bernard Madoff's $65 billion Ponzi scheme was revealed, many new (smaller-scale) Ponzi schemers became exposed. Ponzimonium ... Quarterly Earnings Report A quarterly filing made by public companies to report their performance. Included in earnings reports are items such as net ... Five Management Lessons I Learned Through Trial and Error Being a manager is not something I particularly enjoyed. That’s not to say I wouldn’t jump at the opportunity to work in an environment where I had the responsibilities of being in management, but I don’t think anyone with their head on correctly actually wakes up looking forward to telling employees what they are and aren’t doing correctly. This is especially true if you happen to be the messenger that delivers this feedback from the business owner (not a situation I’m in today, but one I have some experience with). Of all the lessons I’ve learned working in environments ranging from small businesses to local government and even enterprises, there are five basic principles on which I’ve formed my own personal management philosophy around. Some of these tips come not from working in management, but from being managed by someone else and recognizing what exactly did and didn’t make them a good manager. People Hate Being Told What They’re Doing Wrong You’re Not the Expert — They Are

Stress Symptoms : What are the Signs of Stress in Kids? What are some common stress symptoms in children? They can vary from person to person. It is important to learn to recognize the symptoms in children and also to teach kids to recognize the symptoms themselves. Here is a list of common signs of stressful feelings: Migraines or HeadachesNauseaHeartburn and IndigestionLoss of AppetiteChest PalpitationsConstipation or DiarrheaStomach crampsShaking of the bodyMuscle spasmsEczema / Psoriasis that flares upHigher levels of sweatingPoor ConcentrationFunny Tummies Teaching your child to recognize the symptoms in themselves is an excellent skill. Ask your child to notice what happens to him/her when they feel stress. Managing stress is an important skill for children to learn. See also: Home › Stress Management › Stress Symptoms <A HREF="

Time Management for Startups Time management isn’t just about making sure you don’t miss a deadline. Better time management helps you to choose which priorities to focus on; it helps you to be more effective; and it helps you to remain motivated. Many time management techniques were developed for the corporate environment. 1) Know the difference between “busy” and “productive” It sounds trite, but there is a difference between working hard and getting things done. Once you know your priorities, you can focus your efforts on those tasks that have the highest impact. There’s a very natural tendency to mistake “urgent” for “important” too. 2) Know the value of your time As an entrepreneur, you’re responsible for a lot of things. Every hour you’re not using your core expertise is an expensive redeployment of your skills. 3) Organise your contacts and calendar Staying organised is a simple but necessary chore for every entrepreneur. 4) Recognise your rhythms Nobody is equally productive at all hours of the day and night.

5 Ways to Immediately Regain Control of Your Day How often do you begin your day with this thought: “Ugh. I’m too tired for this. I wish I could get settled before the nonstop hassles start?” How often do you end your day with a thought like: “I’m exhausted…I can’t remember what I accomplished today, but I feel like I slogged uphill carrying my desk?” For many of us, the answer is “far too often”. There are many things that could contribute to those feelings, and many are beyond our control – immediate or otherwise. Fortunately, there are several things you can immediately implement to start gaining control of some of your day and give you the perspective to seize control of as much of the rest of it as you possibly can. 1. You just gave yourself three hours right there. 2. Don’t allow incursions. 3. Protect it. 4. “What’s the next action?” David Allen’s Getting Things Done espouses this principle as one of the most crucial to being productive. 5. Do it more often than once a day! (Photo credit: Man Holding Clock via Shutterstock)