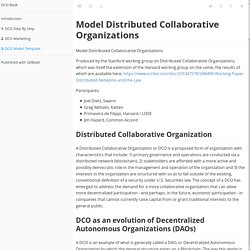 Einav. The Future of Firms. Is There an App for That? There are three fundamental structures that govern the nature of all economic activity: customers, producers and the way, the mediating infrastructure, in which value is exchanged between them. 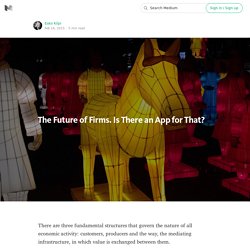 The ways in which each of these elements relate to the others are not in any way set in stone. Vladimir Lenin (1870–1924) famously said that the economic system in Russia would be run as one big factory where everything would be planned in a centralized way. Many economists at the time said that this was impossible. SWARM Working Paper, Distributed Networks and the Law.

Non, la coopérative n'est pas l'avenir de l'économie collaborative. OpenCollective. The Blockchain: A Promising New Infrastructure for Online Commons. Bitcoin has taken quite a beating for its libertarian design biases, price volatility due to speculation, and the questionable practices of some currency-exchange firms. 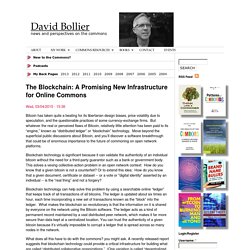 But whatever the real or perceived flaws of Bitcoin, relatively little attention has been paid to its “engine,” known as “distributed ledger” or “blockchain” technology. Move beyond the superficial public discussions about Bitcoin, and you’ll discover a software breakthrough that could be of enormous importance to the future of commoning on open network platforms. FairlyShare — iconomie. Incorporate with Otonomos - Online Company Formation and Governance. Revolutionizing Crowdfunding. Decentralizing the World. Blockchain Governance Suite. Research Plan - FLOK Society (EN) The participatory version of the document, called "Transitioning to a Commons-Based Society", is available for comment at The comments have been reviewed and integrated in this document here. 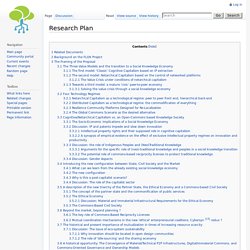 Please note the research methodology explanation has moved to another page at A spanish translation is available here at: Bibliography for the Social Knowledge Economy Michel Bauwens: Colony. ZEROBILLBANK.