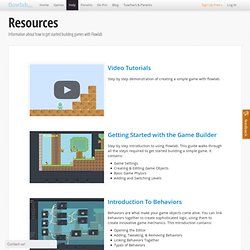 Getting Started with the Game Builder Step by step introduction to using Flowlab. This guide walks through all the steps required to get started building a simple game. Neuroimaging in Python - Pipelines and Interfaces — nipy pipeline and interfaces package. FBP for Mind Maps. Headspace. Gallery. Call graphs in Python. As a guide to program structure, and hopefully an aid to refactoring. 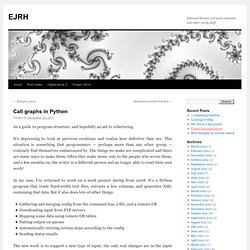 It’s depressing to look at previous creations and realise how defective they are. This situation is something that programmers — perhaps more than any other group — routinely find themselves embarrassed by. The things we make are complicated and there are many ways to make them. Often they make sense only to the people who wrote them; and a few months on, the writer is a different person and no longer able to read their own work!

In my case, I’ve returned to work on a work project dating from 2008. Gathering and merging config from the command line, a file, and a remote DBDownloading input from FTP serversMapping some data using remote DB tablesPutting output on queuesAutomatically retrying certain steps according to the configSending status emails The new work is to support a new type of input; the only real changes are in the input parser. The thing needs drastic refactoring. Node.js. Quadrigram. ConceptNet 5. Zauner/vvvv.js. Bergie/phpflo. 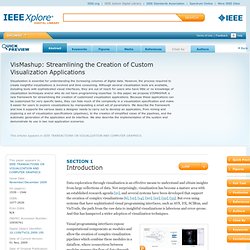 Not surprisingly, visualization has become a mature area with an established research agenda [21], and several systems have been developed that support the creation of complex visualizations [6], [12], [14], [20], [22], [32], [35]. But even using systems that have sophisticated visual programming interfaces, such as AVS, DX, SCIRun, and VisTrails, the path from the raw data to insightful visualizations is laborious and error-prone. And this has hampered a wider adoption of visualization techniques. Fig. 1. Creating an Astrophysics VisMashup to explore a binary star system. View All | Next Visual programming interfaces expose computational components as modules and allow the creation of complex visualization pipelines which combine these modules in a dataflow, where connections between modules express the flow of data through the pipeline [16].

Our Approach. Run. The History of Programming Languages. For 50 years, computer programmers have been writing code. 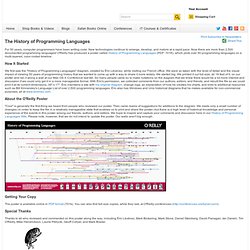 New technologies continue to emerge, develop, and mature at a rapid pace. Now there are more than 2,500 documented programming languages! O'Reilly has produced a poster called History of Programming Languages (PDF: 701K), which plots over 50 programming languages on a multi-layered, color-coded timeline. How It Started We first saw the "History of Programming Languages" diagram, created by Éric Lévénez, while visiting our French office. About the O'Reilly Poster. J. Paul Morrison. DrawFBP Diagramming Tool. Over the last several years, an FBP diagram drawing tool, written in Java, has been evolving. 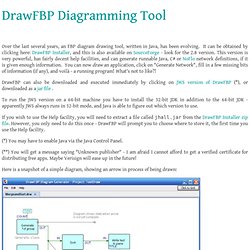 It can be obtained by clicking here: DrawFBP Installer, and this is also available on SourceForge - look for the 2.8 version. This version is very powerful, has fairly decent help facilities, and can generate runnable Java, C# or NoFlo network definitions, if it is given enough information. You can now draw an application, click on "Generate Network", fill in a few missing bits of information (if any), and voilà - a running program!

What's not to like?! Asynchronous Component-Based Programming. It seems hardly worth pointing out that the universe we live in is a highly asynchronous place: it is a place where an infinite number of things are happening all at once. 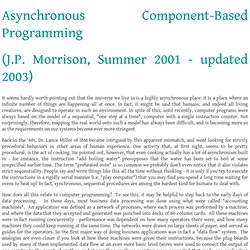 In fact, it might be said that humans, and indeed all living creatures, are designed to operate in such an environment. In spite of this, until recently, computer programs were always based on the model of a sequential, "one step at a time", computer with a single instruction counter. Not surprisingly, therefore, mapping the real world onto such a model has always been difficult, and is becoming more so as the requirements on our systems become ever more stringent Back in the '60s, Dr. Flow-Based Programming. Wiki: FlowBasedProgramming.

Hot off the press! 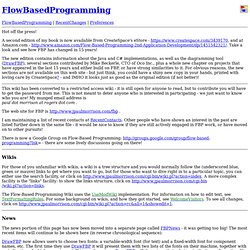 A second edition of my book is now available from CreateSpace's eStore - and at Amazon.com - Take a look and see how FBP has changed in 15 years! The new edition contains information about the Java and C# implementations, as well as the diagramming tool (DrawFBP), several sections contributed by Mike Beckerle, CTO of Oco Inc., plus a whole new chapter on projects that have appeared in the last 15 years and either build on FBP, or have strong similarities to it. Patterns in Flow-Based Programming. (Apr., 2005) J. 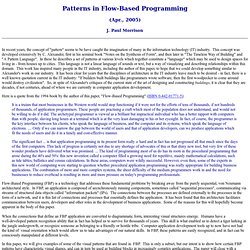 Paul Morrison In recent years, the concept of "pattern" seems to be have caught the imagination of many in the information technology (IT) industry. This concept was developed extensively by C. Alexander, first in his seminal book "Notes on the Synthesis of Form", and then later in "The Timeless Way of Building" and "A Pattern Language". FBP and the Jackson Inversion Model. Material from book starts here: In the middle years of this century, it was expected that eventually computers would be able to do anything that humans could explain to them. 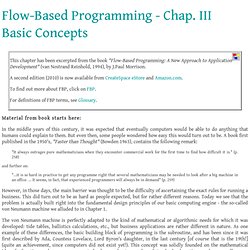 But even then, some people wondered how easy this would turn out to be. A book first published in the 1950's, "Faster than Thought" (Bowden 1963), contains the following remark: "It always outrages pure mathematicians when they encounter commercial work for the first time to find how difficult it is. " (p. 258) and further on: "...it is so hard in practice to get any programme right that several mathematicians may be needed to look after a big machine in an office. ...

However, in those days, the main barrier was thought to be the difficulty of ascertaining the exact rules for running a business. Jackson structured programming. Example of a JSP diagram. 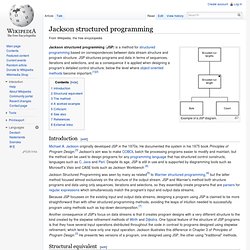 Hoare's report on JSP shows how it relates to his later idea of CSP. Hoare's seminal book on CSP. Pypes. Vvvv - a multipurpose toolkit. Patch Schematics – The Aesthetics of Constraint / Best Practices / guest post by Paul Prudence (@MrPrudence) Visual programming languages, languages that create programs by the manipulation of graphical elements, as opposed to specifying lines of text, have seen an increased popularity in recent years both in audio and video synthesis. VPL Introduction. Microsoft Visual Programming Language (VPL) is an application development environment designed on a graphical dataflow-based programming model.

Institut für Computergraphik und Algorithmen - Arbeitsgruppe für Computergraphik. Information Publication Type: Master Thesis First Supervisor: Martin Haidacher Keywords: Rapid Development, Dataflow Programming, Visual Programming, Visualization Abstract Over the years, many visualization tools and applications were developed for specific fields of science or business. Staying in the alcove of their field, these are highly suited and optimized for visualizing specific data, with the drawback of not being flexible enough to extend or alter these visualizations for other purposes. Often, customers of such visualization packages cannot extend them, to fit their needs, especially if the software is closed source. TPL Dataflow. There is a newer prerelease version of this package available. See the version list below for details. TPL Dataflow promotes actor/agent-oriented designs through primitives for in-process message passing, dataflow, and pipelining. TDF builds upon the APIs and scheduling infrastructure provided by the Task Parallel Library (TPL), and integrates with the language support for asynchrony provided by C#, Visual Basic, and F#.

Introduction to Houdini's Node Based Workflow. Welcome. Introversion Software . Subversion. I want to design a system in which I can build highly complex systems made up of lots of smaller Common Components. I took a shot at this with the Elevator Systems last year, but I was too focussed on getting the script system working well. Population. Idflood/ThreeNodes.js. IMPURE. Live Coding: Automated Artistic "Performances" Using Linux's Kernel. We’ve been hearing the warnings from cautious futurists for years—one day, computer automation and robots would become so advanced as to be able to produce anything, perhaps even art.

Though the creative and social implications of this forecast have been explored by generative artists for years now, we have yet to see any fully automated programs emerge wherein the computer creates art completely independently of the artist (even in generative art, humans still outline the parameters for the ensuing visuals through code). What if the computer programmed itself using that same generative technique, moving the possibilities of “computer-generated art” ever further down the rabbit hole of automation? That’s the question being explored in the two projects below.

The second project is a machine designed to self-program itself, leaving the human factor by the wayside almost completely. Sketching Dynamic Geometry.