How to Open Your Spiritual Chakras: 8 Steps 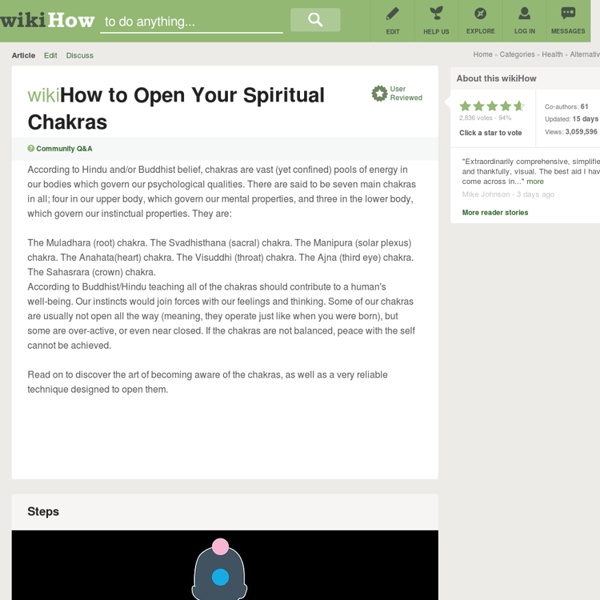 User Reviewed Community Q&A According to Hindu and/or Buddhist belief, chakras are vast (yet confined) pools of energy in our bodies which govern our psychological qualities. There are said to be seven main chakras in all; four in our upper body, which govern our mental properties, and three in the lower body, which govern our instinctual properties. They are: The Muladhara (root) chakra. Read on to discover the art of becoming aware of the chakras, as well as a very reliable technique designed to open them. Steps <img alt="Image titled Open Your Spiritual Chakras Step 1" src=" width="728" height="546" class="whcdn" onload="WH.performance.clearMarks('image1_rendered'); WH.performance.mark('image1_rendered');">1Understand that if you are opening your chakras, there is no need to try to make over-active chakras less active. Community Q&A Add New Question If you open your third eye, could you see that a tree can speak? Ask a Question Answer Questions Make a stranger's day. Video Tips Article Info

Top 6 Supplements To Boost Your Pineal Gland Function News44 The pineal gland, an endocrine gland located in the brain, is said to be the seat of the soul. Also referred to as the Third Eye, this small gland is believed to be involved in reaching higher levels of consciousness, acting as a gateway to dimensions beyond our brain-created reality. For the people that seek to fully activate their spiritual potential and tap into the power of the pineal gland, one must begin by strengthening its function though detoxification and proper nutrition. Researchers are finding that in many people, due to our poor diet with pesticide and chemical-laden foods and environmental toxins such as fluoride in our water, the pineal gland and our entire bodies are becoming exposed to many more toxins and nano-organisms than ever before. These form calcium shells around themselves for protection from our immune systems which has resulted in calcification of the pineal gland, a build-up of calcium phosphate crystals in various parts of the human body.

Awaken Your Creativity Chakra: Svadhisthana Read More AboutThe Other Chakras The second chakra, Svadhisthana, is also known as the creativity and sexual chakra. It is located above the pubic bone and below the navel, and encompasses the genital region and the hypogastric plexus. The word svadhisthana can be translated as “the dwelling place of the self,” and the element of the second chakra is water, which equals cohesiveness. A balanced second chakra leads to feelings of wellness, abundance, pleasure, and joy. The 3 Most Powerful Tools for Pineal Gland Activation By Joshua Eagle Guest Writer for Wake Up World Of all of the countless foods, exercises and techniques used to help awaken and activate the pineal gland, perhaps none exist with as much power to take you to the highest levels of human consciousness than the following 3 tools. Since there are no quick fixes or shortcuts to activating and strengthening the pineal gland, the following techniques mentioned require self-discipline, dedication and a burning desire for ascended health and consciousness. Ayahuasca

Find Power and Warrior Energy in Your Third Chakra Read More AboutThe Other Chakras The third chakra is called Manipura, which means “lustrous gem.” Located around the navel in the area of the solar plexus and up to the breastbone, it is a source of personal power and governs self-esteem, warrior energy, and the power of transformation. The Manipura chakra also controls metabolism and digestion. When you feel self-confident, have a strong sense of purpose, and are self-motivated, your third chakra is open and healthy. How To Heal Unbalanced Chakras After awakening, initiates may have discovered that during their sleep, their chakras have become unbalanced. Bringing balance to the energy centers in the body known as chakras will necessitate devotion to spiritual, mental and physical practice. Integration of the knowledge within this tome will provide initiates with the exercises needed to tune the body's vibration into harmony with the chakras. Being in sync with these wheels and the aura will cause initiates to be filled with energy, organizational efficiency, and happiness. Balancing the spiritual, chemical and hormonal components of the body is commonly referred to as homeostasis, and chakra healing is the primary part of that process. The key chakras are located throughout the body, beginning at the base of the spine with the root chakra or Muladhara, which is represented with the color red.

The Root Chakra: Muladhara Read More AboutThe Other Chakras Located at the base of the spine, the pelvic floor, and the first three vertebrae, the root chakra is responsible for your sense of safety and security on this earthly journey. The word Muladhara breaks down into two Sanskrit words: Mula meaning “root” and Adhara, which means “support” or “base.” This is the first of the chakras of matter. Balancing the root chakra creates the solid foundation for opening the chakras above. Imagine that you’re laying the foundation for a house in which you’re going to live for a long time.

The Science Behind Chakras There is much controversy associated with the existence of CHAKRAS. Many consider them to be a theory with no real backbone. Some believe they are the source of our wellbeing. And others even believe they are the key to enable our spiritual connection to the Universe. So what are the Chakras? Awakening with Suzanne Lie: SIXTH CHAKRA AND GAIA SPEAKS Welcome to our Becoming ONE-People and Planet "Blog-a-thon!" Today, we will present the information about our Sixth Chakra and tomorrow we will hear from Gaia and Her Sixth Chakra