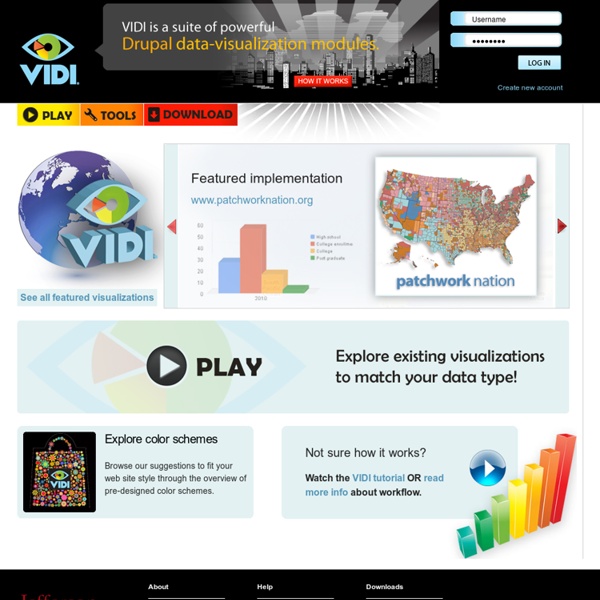 Citadel on the Move > Open Data > Convert My Dataset Here you can transform your data into the Citadel format. Using the Citadel format will allow you to use our Application Generation Tool to make apps and make your data useful to other people. Citadel have created this convertor to make is easy for you to change your excel sheets, CSV files or other information into the Citadel format. To use the convertor, you will need a basic level of technical knowledge and to your data to have the following characteristics: Each entry in the dataset should have a Title, an Address, a Category (e.g. event, restaurant, parking space ect...) and an ID (a number attached to each record) all in separate columns.

Introduction to open-source GIS tools for journalists Originally published by Matt Wynn on poynter.org on 19 September 2011. This excerpt is republished with permission. For years, it’s been only the most committed of journo-nerds who could invest both the time and money to put geography to use. To say that’s changing is an understatement. Data Wrangler UPDATE: The Stanford/Berkeley Wrangler research project is complete, and the software is no longer actively supported. Instead, we have started a commercial venture, Trifacta. For the most recent version of the tool, see the free Trifacta Wrangler. Why wrangle?

Venn Templates and Venn Diagram Software - Free and no download required with Gliffy Online A Venn diagram is a simple way to represent the relationships between groups of things with a clear, visual display. Let your ideas overlap In a Venn diagram, large circles represent groups of things with a shared attribute. Areas where these circles overlap represent individuals that belong equally to both groups. For example, a Venn diagram with one circle representing things made with yeast and another representing alcoholic beverages would have an overlapping zone where you could find both beer and wine. Graphical visualization of text similarities in essays in a book Implementation criteria The graphics generated were intended for high-quality reproduction in the book. Since we wanted them to consist primarily of typography and colored areas, we selected a vector- rather than a pixel-based format. In addition, as an output file, the format was to be written by means of an algorithm to ensure a fully automated process. This made it essential to work with an ”open” format that had a well-known internal syntax and could be easily processed by book layout programs [ad.03]. We used Adobe Illustrator for graphics and Adobe InDesign for book layout.

Online Charts Builder Hohli Online Charts Builder Load From Image URL: Chart Data can't equal to original, but very similar to it. Only for images on chart.apis.google.com Chart Type: 3D Pie charts Blog Announcement Community ~ gsoc It’s a great news, Gephi has been accepted again for the Google Summer of Code for the 5th year! The program is the best way for students around the world to start contributing to an open-source project. Since 2009, each edition is a great success and dramatically boosted Gephi’s project development.

The top 20 data visualisation tools One of the most common questions I get asked is how to get started with data visualisations. Beyond following blogs, you need to practise – and to practise, you need to understand the tools available. In this article, I want to introduce you to 20 different tools for creating visualisations: from simple charts to complex graphs, maps and infographics. Almost everything here is available for free, and some you have probably installed already. Advertisement