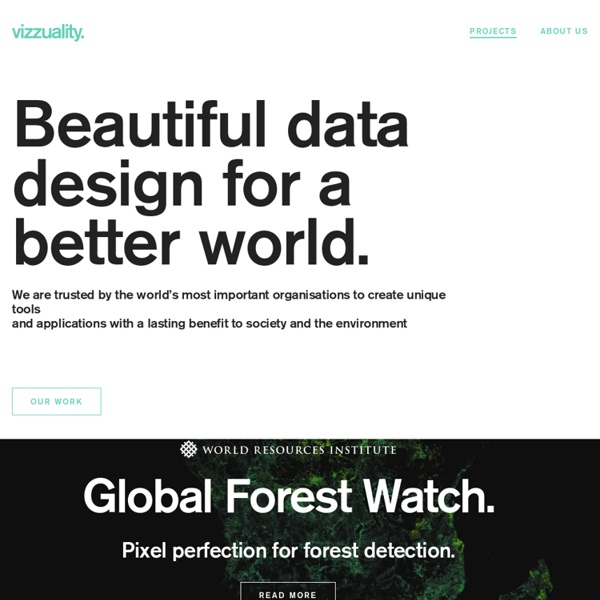 Different languages: How cultures around the world draw shapes differently Let’s do a quick exercise. Are you ready? Draw a circle in the box below. Don’t think too hard! Does Visualization Really Work? Here’s Evidence That It Does Do you remember a scene in The Matrix when Neo opens his eyes and says “I know Kung Fu”? I bet you wished you could learn that fast. I know I did. I have wonderful news for you.

To Build a Better Ballot No, this is not about the 2016 U.S. election. Not just that, anyway. First, I need to explain a weird glitch in our voting system. Let's say there's two candidates, Steven Square and Tracy Triangle , on a couple political axes. Event visualization in a 3D environment Semantic event tracker (SET) is an interactive visualization tool for analyzing events (activities) in a three-dimensional environment. We model an event as an object that describes an action, its location, time, and relations to other objects. Real world event information is extracted from Internet sources, then stored and processed using Semantic Web technologies that enable us to discover semantic associations between events. We use RDF graphs to represent semantic metadata and ontologies. SET is capable of visualizing as well as navigating through the event data in all three aspects of space, time and theme. Temporal data is illustrated as a 3D multi-line in the 3D environment that connects consecutive events.

Data ITEMS: Exploring the Power and Depth of Soft Data for the Museum of Modern Art In the past months, I have had the huge honor of collaborating with Paola Antonelli and Michelle Millar Fisher — respectively Senior Curator and a Curatorial Assistant in MoMA’s Department of Architecture and Design, with Antonelli doubling as MoMA’s Director of R&D — and their team on a data-driven artwork that encapsulates the themes of their newest exhibition on fashion at MoMA, called Items: Is Fashion Modern?. The visualization is magnificently displayed as a closing piece to the exhibition, printed at large scale over three huge 20-foot-high walls in the sixth floor lobby of the original MoMA building on 53rd street, towering over the visitors just as they alight from the escalators. Opening on October 1, 2017, the show explores the present, past — and sometimes the future — of 111 items of clothing and accessories that have had a strong impact on the world in the 20th and 21st centuries, and continue to hold currency today. The questions we tried to answer include, for example:

The Lives of 10 Famous Painters, Visualized as Minimalist Infographic Biographies By Maria Popova For their latest masterpiece, my friend Giorgia Lupi and her team at Accurat — who have previously given us such gems as a timeline of the future based on famous fiction, a visualization of global brain drain, and visual histories of the Nobel Prize and the 100 geniuses of language — have teamed up with illustrator Michela Buttignol to visualize the lives of ten famous painters, using the visual metaphors of painting and the specific stylistic preferences — shapes, colors, proportions — of each artist. Each visual biography depicts key biographical moments — births, deaths, love affairs, marriages, birth of children, travel — as well as notable and curious features like handedness (mostly righties, with the exception of Klee), astrological sign, and connections.

Обійми Дощу - Разом (синґл, 2017) Obiymy Doschu presents the song “Razom” (“Together”) — the second single from the upcoming album “Son” (“Dream”), that will see the light of day on November 17th, 2017. It's a uplifting and tender song about being afraid of your own hapiness and holding your feelings inside, and that sometimes just a little step in the direction of a loved one will help you find yourself again. The song “Razom” is an indispensable part of the band's live performances for 10 years now, but only now it finally reached it's final studio sound with the help of a charming string quartet, and sparks with new colors in masterful hands of a British sound producer and musician Bruce Soord (The Pineapple Thief).

45 Ways to Communicate Two Quantities Back in 2010, I was giving a workshop on interactive data visualization in Lima, Perú, discussing whether a dataset has a unique or at least an ideal way to be visualized. For a simple data structure — a list of some hundreds of numbers, for instance — around half of 20 participants were convinced that there’s one way that is clearly better in communicating the data, regardless of the unit of the values, their range, meaning, context and possible aim of the visualization. This discussion actually came out as a consequence of another idea, which resonated with most participants, as well: that there should be a guide that indicates the best way to visualize each possible dataset. So I proposed the following exercise: let’s try to find all possible ways to visualize a ludicrously small data set of two numbers.