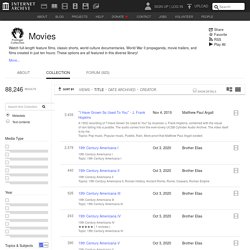 Enjoy! View a list of all the Feature Films sorted by popularity . Do you want to post a feature film? First, figure out if it's in the Public Domain. Short Format Films contributed by users. Science Fiction and Horror films: monsters and aliens, space and time travel, experiments gone wrong, unimagined disasters. A collection of feature or short silent films uploaded by archive users. Expressionistic crime dramas of the 40s and 50s: tough cops and private eyes, femme fatales, mean city streets and deserted backroads, bags of loot and dirty double-crossers.

Includes classics, indies, film noir, documentaries and other films, created by some of our greatest actors, actresses and directors. The collection is divided into the following categories: Comedy & Drama; Film Noir, Horror & Hitchcock; Westerns (many with John Wayne); Martial Arts Movies; Silent Films; Documentaries, and Animation. We also have special collections of Oscar Winning Movies and Films by Andrei Tarkovsky and Charlie Chaplin. Free Comedy & Dramas 125 Korean Feature Films – Free – The Korean Film Archive has put on YouTube over 100 Korean feature films, including Im Kwon-taek’s Sopyonje and Hong Sangsoo’s The Day the Pig Fell Into a Well. Collective:unconscious – Free – Five indie filmmakers adapt each other’s dreams for the screen. MrDomainePublic1. Free Film Noir Movies - 1940's Classic Film. A cup of black coffee at midnight and a good old classic movie, it doesn’t get any better. 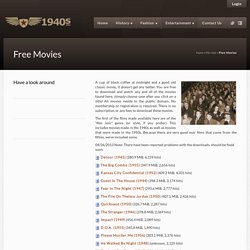 You are free to download and watch any and all of the movies found here, (simply choose save after you click on a title) All movies reside in the public domain. No membership or registration is required. There is no subscription or any fees to download these movies. The first of the films made available here are of the “film noir” genre (or style, if you prefer). This includes movies made in the 1940s as well as movies that were made in the 1950s. 04/26/2013 Note: There have been reported problems with the downloads, should be fixed soon. Detour (1945) (280.9 MiB, 6,159 hits) The Big Combo (1955) (347.9 MiB, 2,656 hits) Films complets à voir ou à revoir. Les Cent et une Nuits de Simon Cinéma [Agnes VARDA] 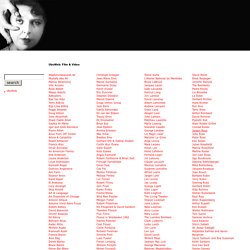 All copyrights belong to the artists. About UbuWeb Film & Video UbuWeb is pleased to present thousands of avant-garde films & videos for your viewing pleasure. However, it is important to us that you realize that what you will see is in no way comparable to the experience of seeing these gems as they were intended to be seen: in a dark room, on a large screen, with a good sound system and, most importantly, with a roomful of warm, like-minded bodies. However, we realize that the real thing isn't very easy to get to. We realize that the films we are presenting are of poor quality. UbuWeb. Obraz. Aujourd'hui à l'affiche. Free Public Domain Movies. Old Movies, Black and White Movies — Free at BnWMovies.com.