Canal Plus films too good to keep for yourself

Canal+ dream commercial. See the Dark and Controversial Christmas Ad From Germany That Has Everyone Talking. Here's a candidate for either the saddest, or the most ridiculous, Christmas ad of 2015. 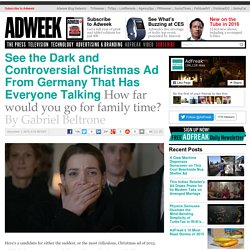 With help from Jung von Matt, which created its smashing "Supergeil" ad last year, German supermarket chain Edeka tells the story of an old man who spends the holidays alone year after year, because his children and grandchildren are too busy to come visit him. This repeat offense is deftly illustrated with shots of the man sitting at a solo place setting, as tree decorations and outfits morph around him.

But as the story progresses, it becomes difficult to cast blame: His progeny are scattered around the world, raising families of their own, doing—ahem—very important business things, and working as doctors. Of course, things take a familiar turn for the tragic when the old man finally dies, lonely and alone. Why Don't We Have Unicorns Today? This Ballsy French Ad Explains Everything. We would still have unicorns around today were it not for an epic screw-up by Noah's son during the loading of the Ark all those years ago. 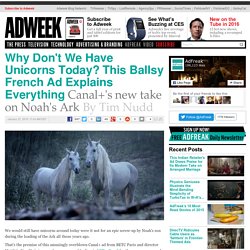 That's the premise of this amusingly overblown Canal+ ad from BETC Paris and director Matthijs Van Heijningen, who so memorably directed "The Bear" for the same agency and client in 2011. It's hard to describe the ad without spoiling it, so just watch it first. As you can see, the film celebrates—in a roundabout way—the broadcaster's screenwriters and its showcase of original programming. And yes, it certainly shows a different side of unicorns than we're used to seeing. "We had some rather surreal discussions on what unicorns' balls actually look like," Stéphane Xiberras, agency president and chief creative officer, tells AdFreak.

And the balls were the easy part of this production. Canal+'s Distressingly Comical Christmas Ad Is a Whole Different Animal. Paris agency BETC and client Canal+ have teamed up for a number of animal-themed commercials over the years, from their famous directing bear to their ballsy unicorns. 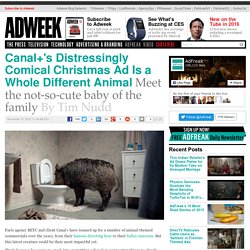 Check out the spot here: The message is amusing enough, though pet-adoption agencies might feel aggrieved that the spot casts animal adoption in a poor light—unless they're actually happy that it fundamentally warns people not to blithely give pets as gifts. With Canal+, these owners could have gotten their pig fix just by watching Babe. Canal+ Lets You 'Be the Bear' in Fun Interactive Sequel to Famous TV Spot. I'm roaring with approval for this interactive sequel, of sorts, to "The Bear," the 2012 Grand Prix-winning commercial from BETC Paris and French movie channel Canal+. 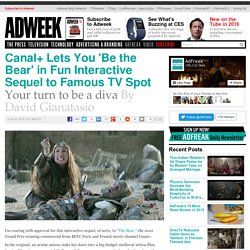 In the original, an ursine auteur sinks his claws into a big-budget medieval action film, fussing like a temperamental Hollywood diva over every aspect of production, from the script and direction to the special effects and score. Ultimately, the spot pulls the rug out from under viewers' expectations with an inspired visual punch line. Now, with "Being the Bear," users can play director and take over a film set, choosing among several genre types to complete a dramatic scene (shown in the first commercial) in which a woman kneels over a wounded warrior who has been shot through the chest with an arrow.

Naturally, some of the selections work better than others, but the writing and on-screen details are sharp throughout, and they reward multiple viewings. See the original spot below. Via Adland. BETC and Canal+ Satisfy Your Craving for More Dwarf Clowns in Advertising. BETC and Canal+ together produced one of the most beloved ads of recent years in "The Bear," a hilarious and impeccably produced spot that won the Film Craft Grand Prix at Cannes in 2012. 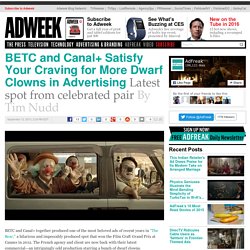 The French agency and client are now back with their latest commercial—an intriguingly odd production starring a bunch of dwarf clowns. Why dwarf clowns? The spot promotes a new Canal+ channel, launching this month, that's fully dedicated to TV series. The great thing about TV series is you're always dying to see what happens next. Likewise, in watching this ad, the viewer has no idea who these dwarf clowns are, or what they're going to do next. "The idea was to make an intriguing film that creates suspense—you can't wait to find out how it ends. CANAL Plus - 'March Of The Emperor' Canal+ pub advertisment English subtitles long version. Canalsat : Quand la brigade anti-téléchargement débarque. Canal Plus Brokeback Mountain (Subtitled in English) Canal plus (commercial) Canal+ Commercial 2012. Canal Digital - The man who lived in a film.