Where did English come from? - Claire Bowern 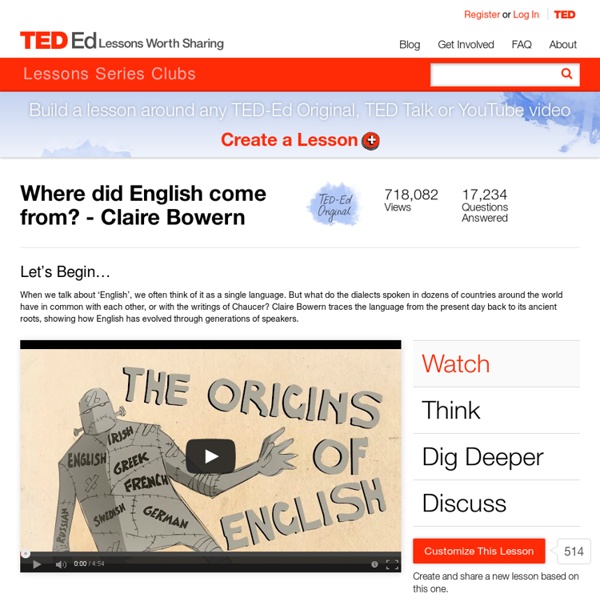 There are two other TED-Ed lessons related to this topic: How languages evolve and How did English evolve? (a lesson that fills in some of the details that we omit here due to the fact that the focus of this lesson was further in the past). There is still a great deal of debate about Indo-European, most importantly about the location of the homeland. To read more about this debate, there are classic books by Mallory and Renfrew, as well more recent works by Anthony. Then, read these articles by Bouckaert et al. At the same site, watch this movie that shows one hypothesis about how Indo-European languages expanded. To learn more about the distribution of languages across the world, see LL-map or The Ethnologue.

Related:  Around the world • English

IDEA International Dialects of English Archive For all you dialecticians, actors, linguists, and just plain language enthusiasts, let’s see if you can identify the home country (or, for the United States, Canada, and China, the state/province) of the following subjects from their accent or dialect. Take a listen, make your best guess, and then click the link under each audio clip to be taken to the sample you just heard. On that sample page, you will be able to read the biography of the subject, hear the person’s unscripted speech, and read the transcription. 1.Audio Player Click here for the answer

Literacy In The Digital Age Editor’s Note: Teaching Channel has partnered with Student Achievement Partners on a blog series about digital literacy tools and their effective use by educators. The majority of the tools mentioned in this post and the four earlier posts in our series, transform the student experience from passive consumers of information to active creators of content, employing multiple English Language Arts standards and skills along the way. We firmly believe this ought to be the new norm in the modern classroom. Kids have access to information; we must teach them how to navigate a world constantly evolving where content is at their fingertips. The traditional application of ELA isn’t enough for future-ready learners. We would argue our students read and write more now than they ever have before — between texting, social media, gaming, and everything else they do in their digitally fueled, online lives.

The History of English - How New Words Are Created The drift of word meanings over time often arises, often but not always due to catachresis (the misuse, either deliberate or accidental, of words). By some estimates, over half of all words adopted into English from Latin have changed their meaning in some way over time, often drastically. For example, smart originally meant sharp, cutting or painful; handsome merely meant easily-handled (and was generally derogatory); bully originally meant darling or sweetheart; sad meant full, satiated or satisfied; and insult meant to boast, brag or triumph in an insolent way. A more modern example is the changing meaning of gay from merry to homosexual (and, in some circles in more recent years, to stupid or bad). Some words have changed their meanings many times.

This Is What A World Map Looks Like When Scaled According To Population Size Where in the world did Australia go?! A new cartogram by Redditer TeaDranks rescales the world’s countries according to population size instead of geographic area. Reconstructing maps based on different variables can be a powerful tool for understanding the world we live in. In this case, certain regions almost disappear from the map while others expand considerably; Canada transforms into a thin, jagged line while India now takes up a massive amount of space. 10 lifesaving websites for ESL teachers Lisa has asked me for some recommendations regarding useful sites for EFL teachers and I’m happy to make a little compilation of the places I visit most often to find ideas, inspirations, betimes lesson plans if I feel exceptionally lazy (The Liberation of the Garden Gnomes by Peter Vahle is just shiny!) and share them with you. So, here we go – my ten favourite websites: Hope you’ll like my choice and give these sites a go.

25 maps that explain the English language English is the language of Shakespeare and the language of Chaucer. It’s spoken in dozens of countries around the world, from the United States to a tiny island named Tristan da Cunha. It reflects the influences of centuries of international exchange, including conquest and colonization, from the Vikings through the 21st century. Here are 25 maps and charts that explain how English got started and evolved into the differently accented languages spoken today. The origins of English 1) Where English comes from

100 English Synonyms to Expand Your Vocabulary – Espresso English A synonym is a word with the same or a similar meaning as another word. For example, the words big and large are synonyms. Buy and purchase are also synonyms – although we tend to use “buy” in a more informal context, and “purchase” in a more formal context. Keep in mind that some synonyms in the list below might not be “perfect” synonyms – there may be slight differences in meaning and connotation. For example, the words smart and wise. Both of them mean “intelligent,” but the word wise also implies that the person has additional good judgement and deep perception about life.

Do you speak Uglish? How English has evolved in Uganda Please don’t dirten my shirt with your muddy hands. Stop cowardising and go and see that girl. Don’t just beep her again, bench her. Typos?