The north of England: a land of change and challenges

Industrial Revolution. Video, archive, film, footage, stills of British history. Manchester in the 19 century. A brief history of Liverpool. By Tim Lambert Liverpool began as a tidal pool next to the River Mersey. 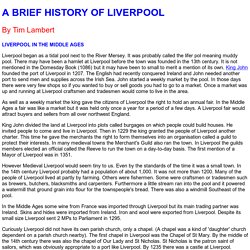 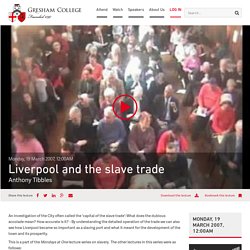 By understanding the detailed operation of the trade we can also see how Liverpool became so important as a slaving port and what it meant for the development of the town and its prosperity. We know a lot about the operation of the trade because a surprising number of documents survive from the period. These include not only account books, but letters to suppliers, letters between owners and captains, captains and owners, owners and agents, indeed a whole wealth of detailed information.

Whilst communication in the 18th century was slower than it is today, those in trade were extremely well informed and had connections throughout the world in which they dealt. Whilst Bristol's merchants were quick to seize the new opportunities, their counterparts in Liverpool were relatively slow. Other important goods were glass beads. Manchester skyline during IR. Liverpool slavery trade. Liverpool Old Docks. Manchester skyline during IR. The Leaving of Liverpool.

The north of England: The great divide. The Manchester metropolis: a rare bright spot IN 1962, as Britain pulled slowly out of recession, Harold Macmillan told an audience that he was determined to “prevent two nations developing geographically, a poor north and a rich and overcrowded south”. 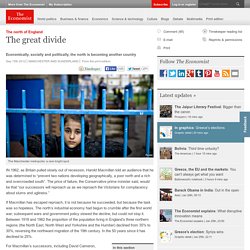 The price of failure, the Conservative prime minister said, would be that “our successors will reproach us as we reproach the Victorians for complacency about slums and ugliness.” If Macmillan has escaped reproach, it is not because he succeeded, but because the task was so hopeless. The north’s industrial economy had begun to crumble after the first world war; subsequent wars and government policy slowed the decline, but could not stop it. Why everything about life in the north of England is the best in Britain. Tennyson wrote that "bright and fierce and fickle is the South/And dark and true and tender is the North". 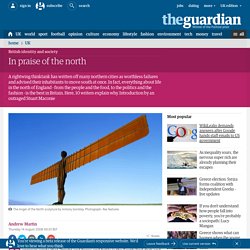 I'm not sure whether the rightwing wonks at the Policy Exchange thinktank are any brighter or fiercer than we northerners but they are certainly more fickle than a teenage pop fan. This week, said body published a report arguing that the regeneration of the north was largely a doomed and failing endeavour, and that the best thing to do would be to encourage us all to move to that unspoilt and spacious corner of England, the south-east, where once we had arrived on the backs of trucks in dusty clothes like Henry Fonda in The Grapes of Wrath, we could all be smartened up and given jobs, perhaps as footmen. Forgive me if I exaggerate for comic and splenetic effect.

"Fickle" hardly does it justice. I went to Sunderland for my book Pies and Prejudice, along with Liverpool, Bradford and many another poor, benighted hole, as Policy Exchange would doubtless have it. 'Having a Purpose' Liverpool Unemployment Documentary. Liverpool city of harder times to come. Liverpool European capital of culture. Social cohesion and urban trends in L&M. Greater Manchester: social, economic and sustainability context. THE MANCHESTER WAY. Manchester Business Demography (2011) Manchester annual population survey.

Alcohol plague in Liverpool. 23 March 2011Last updated at 07:36 Liverpool residents are twice as likely to die from an alcohol-specific condition as the national average Alcohol misuse is being addressed by health bosses in Liverpool, who have unveiled a three-year strategy to tackle the problem. 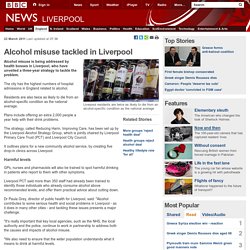 Streets of Liverpool - Old Liverpool Photos and Liverpool Images. Liverpool and the river Mersey. Brian & Michael Lowry Art dedicated. Matchstalk cats and dogs. Lowry Tate London Exibithion 2013. Lowry at Tate Britain 2013. Lowry, a critique (the Guardian) Tate Shots Lowry. TIME FOR REFLECTIONS: What's this L S Lowry? Continuing my series of art critiques, I would like to introduce you to L S Lowry, an English painter who lived from 1887 to 1976. 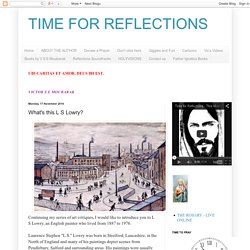 Laurence Stephen "L.S. " Lowry was born in Stretford, Lancashire, in the North of England and many of his paintings depict scenes from Pendlebury, Salford and surrounding areas. His paintings were usually of urban landscapes and he painted human figures in a simplified way which was referred to as "matchstick men. " The scene you see above is of the Northern town of Huddersfield which was painted in 1965. Those of you who have read my book "VISIONS", and my other books and stories about Father Ignatius, will know that they are set in an un-named Northern town in England in the 1950's and 60's.

In 1932 Lowry's father died leaving the family with debts, whilst his mother became ill and bedridden, relying on her son for care.Lowry often painted well into the night after his mother had fallen asleep. He painted Salford's smokey tops. LS Lowry and the industrial revolution. Jackie Wullschlager on a Tate show that aims to challenge our perceptions of LS Lowry ©Bridgeman ‘The Pond’ (1950) good exhibition may enhance or deepen our understanding of an artist, but very few transform our perception of a well-known name. 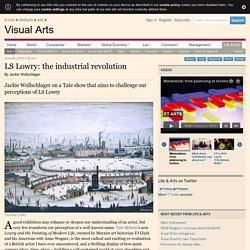 Tate Britain’s new Lowry and the Painting of Modern Life, curated by Marxist art historian TJ Clark and his American wife Anne Wagner, is the most radical and exciting re-evaluation of a British artist I have ever encountered, and a thrilling display of how paint conveys ideas, time, place – building a self-contained world at once absorbing and convincing in its relation to lived experience. Scale, ambition, intent and variety are qualities that we have not, until now, associated with LS Lowry. “Industrial Landscape Wigan” (1925) is Lowry’s first fully realised portrayal of the Britain left behind by a century of industrialisation. Genius of Lancashire's 'matchstick' master: This summer's biggest exhibition reassesses the merits of LS Lowry - Features - Art.

Although he possessed a cloth cap, in every published photograph of him, whether at his easel or pounding the Lancashire streets, he is dressed in a dark suit and tie; out of doors, he wore a trilby. 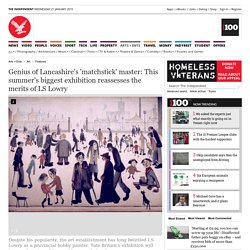 His job of rent collector with the Pall Mall Property Company, which he held down for more than 40 years, placed him squarely on the capitalist side of the class barricade. Yet it was his family's sudden tumble down the class ladder that triggered his genius. It was in 1909, when Lowry was 21, that he, his mother Elizabeth and his father Robert moved from the salubrious greenery of Pine Grove, Victoria Park, to 117 Station Road, Pendlebury, on the north-west outskirts of Salford, on the way to Bolton and Wigan. The move was "for business reasons" – the failing finances of Robert Lowry that were to burden his family with debt after he died. To begin with, her son felt the same way. There are many ways to damn Lowry with faint praise. Lowry and the Painting of Modern Life. Music In Liverpool Short Film Documentary. Manchester Music timeline. The Leaving of Liverpool The Dubliners.

Yellow Submarine Movie Trailer (The Beatles) Yesterday The Beatles. The Beatles Strawberry Fields Forever (official video) Don't Look Back In Anger (OASIS) Miles Kane Don't Forget Who You Are. The Smiths - There is A Light That Never Goes out. The Verve - Bitter Sweet Symphony. The Chameleons - View from a Hill. Liverpool, the cavern club. The Beatles. Original Beatles' musical instruments (the cavern club) Alberto in "the Cavern club" Skyliner, the hidden Manchester. Things to Do - A Guide for the Creative Tourist. The Manchizzle. Postcards from the Manchester Island. SevenStreets: making the most of Liverpool. Sevenstreets: Making the Most of Liverpool Local intelligence. 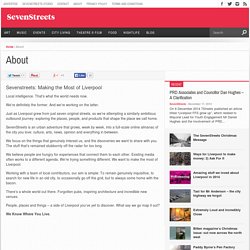 That’s what the world needs now. We’re definitely the former. And we’re working on the latter. Just as Liverpool grew from just seven original streets, so we’re attempting a similarly ambitious outbound journey: exploring the places, people, and products that shape the place we call home. SevenStreets is an urban adventure that grows, week by week, into a full-scale online almanac of the city you love: culture, arts, news, opinion and everything in between. We focus on the things that genuinely interest us, and the discoveries we want to share with you. We believe people are hungry for experiences that connect them to each other. Working with a team of local contributors, our aim is simple: To remain genuinely inquisitive, to search for new life in an old city, to occasionally go off the grid, but to always come home with the bacon. There’s a whole world out there. We Know Where You Live. Independent Liverpool. Before your newsfeed becomes full of “new year, new me” statuses, we thought we’d level the playing field with the good to bad news ratio as negativity has already hit its quota. 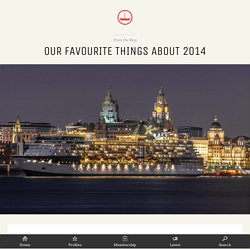 It is easy to become bogged down with the nature of the tabloids but let us appreciate the renaissance Liverpool has gone through and is still going through with just a snapshot of some of the things that happened in the last 365 days. Independents Getting Recognition. Hey! Manchester - alternative concert promotions in the rainy city. Hey! Manchester was established in February 2006 to promote alternative gigs in Manchester.

Heysel Stadium disaster. The Heysel Stadium Disaster (pronounced: [ˈɦɛizəl]; Dutch: Heizeldrama) occurred on 29 May 1985 when escaping fans were pressed against a wall in the Heysel Stadium in Brussels, Belgium, before the start of the 1985 European Cup Final between Juventus of Italy and Liverpool of England. 39 people—mostly Juventus fans—died[1] and 600 were injured.[2] Approximately 1 hour before the Juventus-Liverpool final was due to kick off, a large group of Liverpool fans breached a fence separating them from a "neutral area" which contained mostly Juventus fans. Graphene Made in Manchester. Liverpool NewDocks. Rebalancing Liverpool city region. UK business report (HSBC)

Manchester tourism strategy (2013) Vistor Economy Strategy Liverpool. The University of Manchester. Manchester Nobel Prize winners. The University of Manchester has a rich academic history. We can lay claim to 25 Nobel laureates among our current and former staff and students. Joseph John Thomson 1906 Nobel Prize in Physics JJ Thomson studied electrical discharges in gases. The Beatles Story, Liverpool. National Football Museum. Museum of Science and Industry. National Museums Liverpool. Football Boosts Greater Manchester visitor economy. The latest Manchester Monitor – a snapshot of the economic wellbeing of the region – highlights a number of positive trends in terms of Greater Manchester’s visitor economy, against the backdrop of continuing stagnation in the property and jobs market.

The analysis of the latest data available in March 2013 brings to the fore the role that football plays in boosting the region’s visitor economy, where a number of key league and cup games at the start of the year have led to hotels recording some of the highest levels of occupancy (between 93% and 99%) on match days, and the best overall January occupancy rates since 2008. Keeping with the visitor economy, Manchester Airport recorded 1.3 million passengers in December 2012, 61,000 up on the same month in 2011. For 2012 as a whole the airport saw over 19 million passengers through its doors, an annual rise of over 800,000. Prospects for further growth also look good with new direct routes to Moscow, Cairo and Krakow being added in 2013. Liverpool new docks.