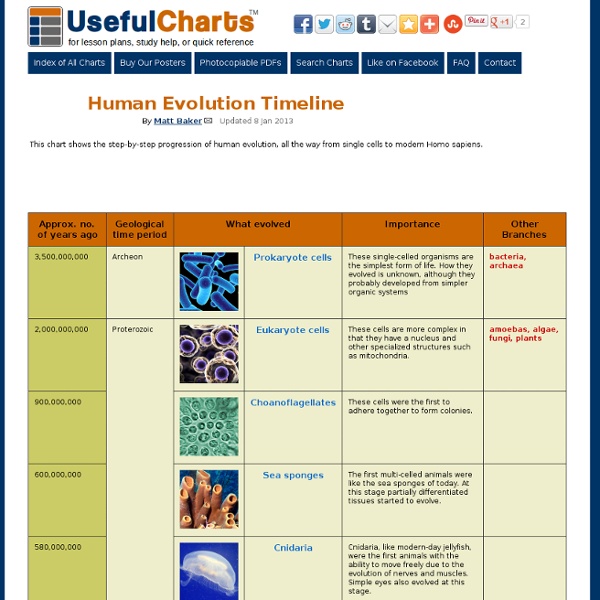 Blue Planet Biomes - World Biomes What is a Biome? A biome is a large geographical area of distinctive plant and animal groups, which are adapted to that particular environment. The climate and geography of a region determines what type of biome can exist in that region. Major biomes include deserts, forests, grasslands, tundra, and several types of aquatic environments. Each biome consists of many ecosystems whose communities have adapted to the small differences in climate and the environment inside the biome. All living things are closely related to their environment. The earth includes a huge variety of living things, from complex plants and animals to very simple, one-celled organisms.

Eye Evolution - Cumulative Evolution of Complex Structures - Science 8 - Childs Directions: The diagram at right shows the evolution of the eye. One of the criticisms about evolution is that complex structures (such as eyes) could not evolve randomly, as is the case with natural selection. However, CUMULATIVE EVOLUTION explains how natural selection of random variations within a species could produce complex structures. An eye does not just appear one generation in a species, it is a slow process of slightly better adaptations that over long periods leads to the development of the eye. Go to the website below to find out more about eye evolution! Evolution of the Eye Website: Course Blog Posting - Add Your Comments and Questions Here: Note: The authors of the website criticize an idea called "intelligent design".

Boy finds 10,000-year-old arrowhead on New Jersey beach Noah Cordle, 10, found a 10,000-year-old Paleoindian arrow point on a New Jersey beach.Kelly-Jane Cotter/ Asbury Park Press BEACH HAVEN, N.J. – A boy playing on a New Jersey beach has unearthed a 10,000-year-old arrowhead possibly used by ancient Native Americans to spear fish or hunt mastodon. Noah Cordle, 10, and his family were vacationing on the Long Beach Island last week when he found it at the edge of the surf in the community of Beach Haven. It was sharp enough that it hurt as it hit his leg. He thought it was a crab until he picked up the object. The Springfield, Virginia family contacted the Archaeological Society of New Jersey to check it out. The president, Greg Lattanzi, who is also a curator at the New Jersey State Museum in Trenton, tells the Asbury Park Press that the arrow point probably dates back 8,000 to 11,000 years. "I was basically blown away," he said. Only one other in the collection washed up on a beach. "Jasper is a yellow-brown stone," Lattanzi told the paper.

Current Biology - Separate Processing of Different Global-Motion Structures in Visual Cortex Is Revealed by fMRI Figure 1 A Schematic Description of the Motion Stimuli (A) The subjects viewed a radial-motion, translation-motion, or random-motion stimulus in 16 s epochs. (B) The translation-motion display consisted of two sets of global motion. Figure 2 Mean MR Signal Amplitudes for Each Visual Area for Each Eccentricity Each column represents the average of 24 data, i.e., 6 subjects × 4 time points. Figure 3 Activation Maps from the First Experiment (A) Activation map for radial motion in a representative subject (left hemisphere). (B) For translation motion, activation was seen in the peripheral V3 (>2°), V3A (>2°), and MT/MST. (C) Eccentricity map of the representative subject obtained from a separate experiment. Figure 4 The Results from Experiment 2, in which Expansion and Contraction Were Superimposed FOE was presented either in the fixation (red) or 4.5° away from the fixation (blue).

Before Civilization - Ancient Civilizations for Kids Early humans showed another major sign of intelligence about 35,000 years ago. Humans began to draw on the walls of caves—probably other places too, but it has been preserved in caves. Cave paintings often depict hunting scenes. This is some of the first artwork and also an early attempt at written communication. Development of Agriculture The most important development in human history is the development agriculture, which is another word for farming. Corn is a good example of domestication. Humans have lived in Africa longer than anywhere else, but many African societies adopted farming much later than other parts of the world. The soil near rivers is very fertile—or full of plant food and good for growing. Agriculture Brings Changes Farming had other effects on lifestyle and society. The society that farming created forced people to interact in new ways. The world was rapidly changing and people finally had time to settle down and think about the world around them. A New Way of Life

Quantum Consciousness Tony's Home | Clifford Math of Consciousness at the Edge of Chaos | | Superposition Separation | Structures | OrchOR | TimeScales - Table - Graph | | Cycles: Biology and Quantum | | Conscious Universe | Quantum Mind 2003 | QuanCon | Clifford Math of Consciousness The Discrete HyperDiamond Generalized Feynman Checkerboard and Continuous Manifolds are related by Quantum Superposition: Elements of a Discrete Clifford algebra correspond to Basis Elements of a Real Clifford algebra. Dimi Chakalov said: "... 1. 2. 3. 4. 5. 6. My thoughts are: It looks to me as though "re-annealing" (in 2) = "collapse" (in 5 and 6). In the Many-Worlds picture of the Multiverse Macrospace, you don't have collapse, but what happens is that you cease to experience ALL AT ONCE many superposed possibilities and you begin to experience EACH possibility IN ITS OWN "world" with no (or very limited) connections among the different "worlds". Robert Neil Boyd has suggested that Consciousness could be modeled by Clifford algebras.

Ancient Man Had Neanderthal Great-Great Grandfather A modern human who lived in what is now Romania between 37,000 and 42,000 years ago had at least one Neanderthal ancestor as little as four generations back—which is to say, a great-great-grandparent. Scientists have known for at least half a decade that living humans bear traces of Neanderthal blood—or more specifically, Neanderthal DNA. Just when and where our ancestors bred with their now-extinct cousins, however, has been tricky to pin down until now. A new study published Monday in the journal Nature has the highest percentage of Neanderthal DNA of any modern human ever studied. “I could hardly believe that we were lucky enough to hit upon an individual like this,” says study co-author Svante Pääbo of the Max Planck Institute for Evolutionary Anthropology in Leipzig. The specimen, known as Oase 1, consists only of a male jawbone, and from the moment it was discovered in 2002 its shape suggested that it might belong to a hybrid between Homo sapiens and Neanderthal.

Epigenetics: A Turning Point in Our Understanding of Heredity | Guest Blog The views expressed are those of the author and are not necessarily those of Scientific American. A DNA molecule that is methylated on both strands on the center cytosine. Christoph Bock, Max Planck Institute for Informatics. Image used by permission of its author. In a study published in late 2011 in Nature, Stanford University geneticist Anne Brunet and colleagues described a series of experiments that caused nematodes raised under the same environmental conditions to experience dramatically different lifespans. This type of finding—an inherited difference that cannot be explained by variations in genes themselves—has become increasingly common, in part because scientists now know that genes are not the only authors of inheritance. Epigenetics and the state of chromatin In Brunet’s lab, epigenetic inheritance is a big deal. Chromatin is a compact fiber of proteins and DNA that exists in either a condensed or a relaxed state. Epigenetic inheritance of longevity in nematodes

Epigenomics Fact Sheet Epigenomics What is the epigenome? A genome is the complete set of deoxyribonucleic acid, or DNA, in a cell. DNA carries the instructions for building all of the proteins that make each living creature unique. Derived from the Greek, epigenome means "above" the genome. Top of page What does the epigenome do? Each person's body contains trillions of cells, all of which have essentially the same genome. The protein-coding parts of your genome, called genes, do not make proteins all of the time in all of your cells. So, the epigenome is what tells your skin cells to behave like skin cells, heart cells like heart cells and so on. What makes up the epigenome? The epigenome is made up of chemical compounds, some of which come from natural sources like food and others from man-made sources like medicines or pesticides. The epigenome marks your genome in two main ways, both of which play a role in turning genes off or on. Is the epigenome inherited? What is imprinting? Can the epigenome change?

Natural Selection Natural Selection The characteristics of birds result from evolutionary processes, the most important process being natural selection. It was Charles Darwin who first pointed out that just as stockmen shaped their herds by selecting which animals would be allowed to breed, so too nature shaped all organisms by "selecting" the progenitors of the next generation. Darwin's thinking had been influenced by the great economist Thomas Malthus, who emphasized the capacity of people and other organisms to multiply their numbers much more rapidly than their means of subsistence. Darwin realized, therefore, that most individuals born of any species could not have survived long enough to reproduce. He concluded that those that had been able to survive and reproduce had not been a random sample of those born, but rather variants especially suited to their environments. Natural selection provides a context in which to view the physical and behavioral characteristics of birds.

Research reveals genetic link to human intelligence University of Manchester scientists, working with colleagues in Edinburgh and Australia, have provided the first direct biological evidence for a genetic contribution to people's intelligence. Previous studies on twins and adopted people suggested that there is a substantial genetic contribution to thinking skills, but this new study -- published in the journal Molecular Psychiatry -- is the first to find a genetic contribution by testing people's DNA for genetic variations. The team studied two types of intelligence in more than 3,500 people from Edinburgh, Aberdeen, Newcastle and Manchester. The paper, by Dr Neil Pendleton and colleagues, found that 40% to 50% of people's differences in these abilities could be traced to genetic differences. The study examined more than half a million genetic markers on every person in the study. "The study confirms the earlier findings of the research in twins.