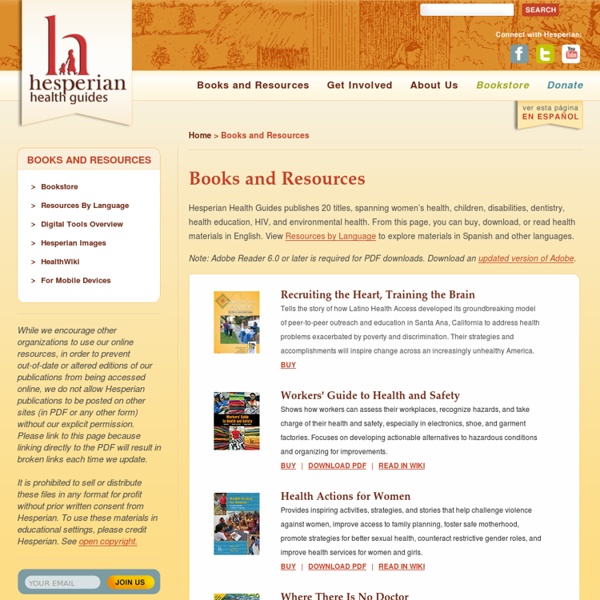 A Step by Step Guide to Creating A Virtual Field Trip Using Google Earth February, 2014 Since I posted about the " 20 online museums for teachers and students " I received several emails with links, apps, tools and more tips related to educational virtual field trips. One of the links I got included this wonderful guide I am sharing with you below created by Silvia Rosenthal from Langwitches. The guide is about how to frame a virtual field trip using Google Earth. Being able to frame your field trip enables you to take your students into an education virtual learning trip in which they will engage in authentic and experiential learning. Silvia used Tour of Jacksonville, Florida as an example of the virtual field trip you can create for your students. How to Create a folder in Google Earth How to add an image of a landmark or building How to edit them placemarks and many more. I invite you to download this short guide and use it with your students.

HealthMap ActiveConsciousness.com -- Active Consciousness: The groundbreaking book by Amy Lansky on consciousness, meditation, and synchronicity, named as one of The Top 5 Books That Will Change the Way You Think! 20 Wonderful Online Museums and Sites for Virtual Field Trips to Use in Class January 27, 2014 Yesterday when I was working on the list of iPad apps that teachers can use with their students to make virtual field trips, it dawned on me to compile another list of web based platforms for both online museums and virtual field sites that can be used with students in class. After scouring the web for hours I finally landed on the selection below. Have a look and as always share with your students and colleagues. 1- National Portrait Gallery The Smithsonian’s National Portrait Gallery tells the history of America through individuals who have shaped its culture. Through the visual arts, performing arts and new media, the Portrait Gallery portrays poets and presidents, visionaries and villains, actors and activists whose lives tell the American story. 2- Smithsonian Museums The Smithsonian Institution—the world’s largest museum and research complex—includes 19 museums and galleries and the National Zoological Park. 3- The Field Museum 5- The British Museum 6- Science Museum

PHAROS - Home Ongoingness: Sarah Manguso on Time, Memory, Beginnings and Endings, and the True Measure of a Life Filled with Aliveness by Maria Popova “Perhaps all anxiety might derive from a fixation on moments — an inability to accept life as ongoing.” Some of humanity’s most celebrated writers and artists have reaped, and extolled, the creative benefits of keeping a diary. For John Steinbeck, journaling was a tool of discipline and a hedge against self-doubt; for Virginia Woolf, a way to “loosen the ligaments” of creativity; for André Gide, a conduit to “spiritual evolution”; for Anaïs Nin, who remains history’s most dedicated diarist, the best way to “capture the living moments.” Joining the canon of insightful meta-diarists is Sarah Manguso with Ongoingness: The End of a Diary (public library) — a collection of fragmentary, piercing meditations on time, memory, the nature of the self, and the sometimes glorious, sometimes harrowing endeavor of filling each moment with maximum aliveness while simultaneously celebrating its presence and grieving its passage. I wrote so I could say I was truly paying attention.

OT Without Borders | PROMOTING SOCIAL JUSTICE THROUGH OCCUPATIONAL THERAPY | Page 2 OTs have a role in public health, as in helping people stay healthy and preventing illness or injury through health promotion (as an aside the WHO defines health as not just the absence of disease or illness, but rather a state of well-being). The following quotes sum up the shift that is necessary however amongst … Continue reading I got busy with getting ready for school and now starting school, so I didn’t have time to update the blog. Lo siento!! Here are some final pictures from the end of my time in Guatemala. I learned all about cacao and made some chocolate at the Choco Museo, yum! I am back in the U.S. of A! A few of us traveled to Lake Atitlan for part of the past weekend. On Friday our field school group traveled to a town called Comalapa to do some work with a cool NGO called Long Way Home. Updates The place where we stayed in Lanquin (on my earlier weekend trip to Semuc Champey) had a professional photographer on our cave and Semuc Champey tour.