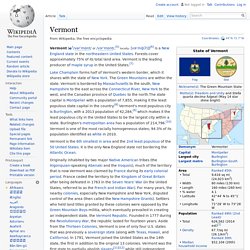 Only two—Lamoille and Washington—are entirely surrounded by Vermont territory. Vermont ( i/vərˈmɒnt/ or /vɜrˈmɒnt/,[5] locally: [vɚˈmɑ̟̃(ʔ)])[6] is a New England state in the northeastern United States. Forests cover approximately 75% of its total land area. Vermont is the leading producer of maple syrup in the United States.[7] Lake Champlain forms half of Vermont's western border, which it shares with the state of New York. Rhode Island. Rhode Island ( 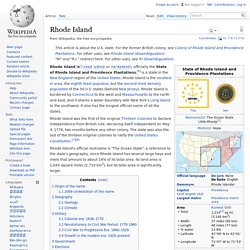 New Hampshire. New Hampshire (US i/nuːˈhæmpʃər/) is a state in the New England region of the northeastern United States. 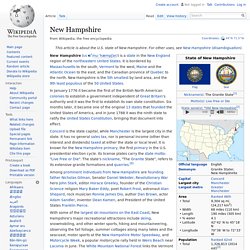 It is bordered by Massachusetts to the south, Vermont to the west, Maine and the Atlantic Ocean to the east, and the Canadian province of Quebec to the north. New Hampshire is the 5th smallest by land area, and the 9th least populous of the 50 United States. In January 1776 it became the first of the British North American colonies to establish a government independent of Great Britain's authority and it was the first to establish its own state constitution. Massachusetts. Massachusetts Before the American Civil War, Massachusetts was a center for the temperance, transcendentalist, and abolitionist movements. 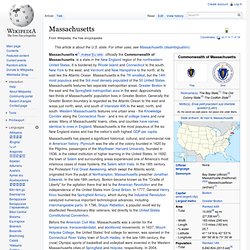 In 1837, Mount Holyoke College, the United States' first college for women, was opened in the Connecticut River Valley town of South Hadley. In the late 19th century, the (now) Olympic sports of basketball and volleyball were invented in the Western Massachusetts cities of Springfield and Holyoke, respectively. In 2004, Massachusetts became the first U.S. state to legally recognize same-sex marriage as a result of the decision of the state's Supreme Judicial Court. Massachusetts has contributed many prominent politicians to national service, including members of the Adams family and the Kennedy family. Originally dependent on fishing, agriculture, and trade, Massachusetts was transformed into a manufacturing center during the Industrial Revolution.

Name[edit] Prominent roads and cities in Massachusetts Geography[edit] Ecology[edit] History[edit] Maine. Maine ( i/ˈmeɪn/; French: État du Maine) is a state in the New England region of the northeastern United States, bordered by the Atlantic Ocean to the east and south; New Hampshire to the west; and the Canadian provinces of Quebec to the northwest and New Brunswick to the northeast. 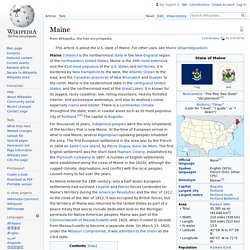 Maine is both the northernmost and easternmost portion of New England. It is known for its scenery—its jagged, mostly rocky coastline, low, rolling mountains, heavily forested interior, and picturesque waterways—as well as for its seafood cuisine, especially lobster and clams. Maine is the northernmost U.S. state with an Atlantic coastline, but in spite of its maritime position, it has a continental climate even in coastal cities such as its largest city Portland.[9] For thousands of years, indigenous peoples were the only inhabitants of the territory that is now Maine.

Geography[edit] A map of Maine and surrounding region Maine has several unique geographical features. "All I could see from where I stood. Connecticut. Connecticut ( i/kəˈnɛtɨkət/, kə-NET-i-kət)[12] is the southernmost state in the region of the United States known as New England. 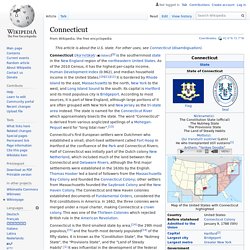 Connecticut is also often grouped along with New York and New Jersey as the Tri-State area. It is bordered by Rhode Island to the east, Massachusetts to the north, New York to the west, and Long Island Sound to the south. Its capital city is Hartford, and its most populous city is Bridgeport. The state is named after the Connecticut River, a major U.S. river that approximately bisects the state. The Connecticut River, Thames River, and ports along Long Island Sound have given Connecticut a strong maritime tradition, which continues today. Although it is one of the wealthiest states in the US by most economic measures, the income gap between its urban and suburban areas is unusually wide.[20] Geography[edit] Nouvelle-Angleterre. Un article de Wikipédia, l'encyclopédie libre. 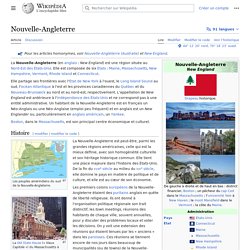