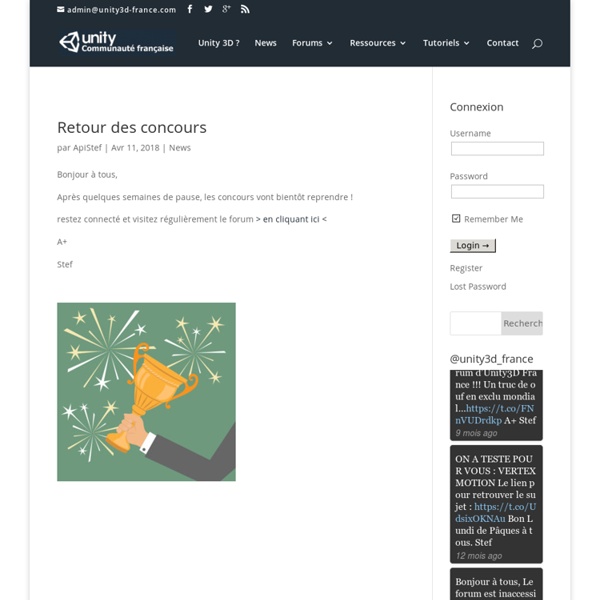 Build Your Own Mini Mars Rover With These Brilliant, NASA-Approved Blocks The littleBits Space Kit is a box of Lego-like components that allow anyone to conduct NASA-approved experiments. littleBits You can build miniature, but functioning, versions of NASA’s famous machines like this satellite. Or a Mars rover, which uses a remote trigger module to control the robot from any remote. Here's a mini replica of the AURA satellite, which collects global observations of Earth. Category:Games - LOVE This list is automatically generated, and you can not add games here manually. If you want your game to appear here, see Guidelines. This page is cached, which means that your newly added game won't appear here unless the page is refreshed. All Games Mecanim - Simple and powerful animation technology Mecanim, Unity’s uniquely powerful and flexible animation system, brings your human and non-human characters to life with incredibly natural and fluid motion. Because it’s natively integrated with the Unity engine, Mecanim abolishes the need to spend expensive development efforts integrating 3rd party middleware. You get all the tools and workflows you need to create and build muscle clips, blend trees, state machines and controllers directly in Unity.

Getting Started Checklist To use the gogoboard, you should have the following things ready. A GoGo Board together with a USB cable. Batteries or power adapter if using motors. Although the gogoboard can be powered via the USB cable, it is not recommended for use with motors, as the USB port provides only limited power.Some sensors and/or motors.Construction materials such as cardboard paper, wood, ice-cream sticks, string, etc.A computer running any recent version of Windows (Windows 2000 and older have not been tested). Connecting to the GoGo Board for the first time scripting:introduction [Physion] Physion scripting is based on the ECMAScript scripting language, as defined in standard ECMA-262. Microsoft's JScript, and Netscape's JavaScript are also based on the ECMAScript standard. For an overview of ECMAScript, see Qt's ECMAScript reference. With Physion scripting you can do the following: Write regular Javascript code (e.g. variables, loops, conditionals, etc).

scripting:tutorials:hello_world [Physion] Introduction This the classic “Hello World” example. Create a new file (or scene if you prefer) Elementary - NEW! WeDo 2.0 Make science come to life Your second- through fourth-graders can gain a deeper insight into science when you use WeDo 2.0 to create engaging, high impact lessons. The hands-on tools encourage pupils to get involved in science exploration by asking questions, analyzing data and communicating their findings, while the curriculum pack covers real science practices linked to the Next Generation Science Standards, including gathering evidence, carrying out investigations and designing prototypes. The core set comes with a programmable Smarthub, motor, two sensors and 280 building elements, plus software which includes one Get Started Project, delivering an introductory experience to the resource. Try the WeDo 2.0 software for free Curriculum based learning