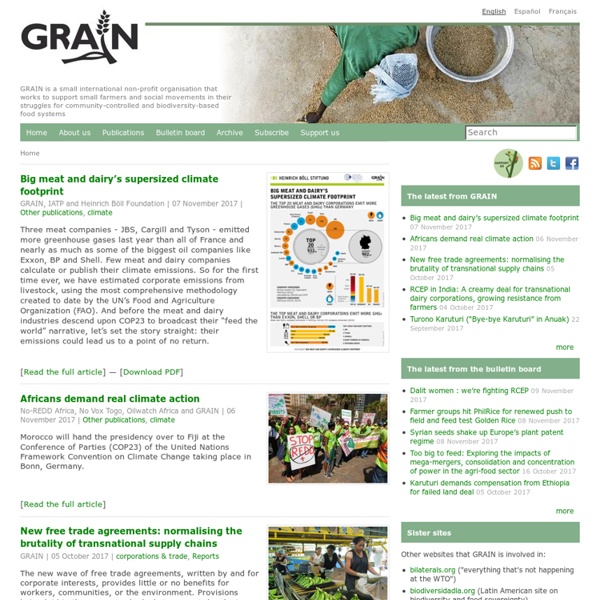 Tell Europe to End Patents on Plants and Animals Name not displayed, WA Mar 04, 22:19 Ms. Mary Ch, ON Hungry for land: small farmers feed the world with less than a quarter of all farmland It is commonly heard today that small farmers produce most of the world's food. But how many of us realise that they are doing this with less than a quarter of the world's farmland, and that even this meagre share is shrinking fast? If small farmers continue to lose the very basis of their existence, the world will lose its capacity to feed itself. GRAIN took an in depth look at the data to see what is going on and the message is crystal clear. We need to urgently put land back in the hands of small farmers and make the struggle for agrarian reform central to the fight for better food systems. Download the PDF version of this report here

How farmers can help fight climate change The other week, I spent some time interviewing several business leaders for the North Carolina Sustainability CEnter, asking them about their reactions to President Obama's climate speach. Their responses were decidedly mixed, but one discussion stayed with me. When I asked Charles Sydnor, the owner of Braeburn Farm, about the urgency of climate policy for his industry—he had this to say: "As a farmer, when we look at climate change there are two sides to the story – but we only really talk about one – namely the production of greenhouse gases. Yet agriculture should be part of the solution. I can take you to places right now where crops are grown year-after-year-after-year without tilling the land, and where there is increased carbon sequestration year-after-year.

Want to double world food production? Return the land to small farmers! The data show that the concentration of farmland in fewer and fewer hands is directly related to the increasing number of people going hungry every day. The United Nations declared 2014 as the International Year of Family Farming. As part of the celebrations, the UN Food and Agriculture Organisation (FAO) released its annual 'State of Food and Agriculture', which this year is dedicated to family farming. Family farmers, FAO say, manage 70-80% of the world's farmland and produce 80% of the world's food. But on the ground - whether in Kenya, Brazil, China or Spain - rural people are being marginalised and threatened, displaced, beaten and even killed by a variety of powerful actors who want their land. A recent comprehensive survey by GRAIN, examining data from around the world, finds that while small farmers feed the world, they are doing so with just 24% of the world's farmland - or 17% if you leave out China and India.

www.centrosachamama.org Sachamama Center for BioCultural Regeneration (SCBR) is a non-profit organization in the Peruvian High Amazon in the town of Lamas, Department of San Martin, dedicated to the biocultural regeneration of the region in collaboration with the indigenous Kichwa-Lamistas, the descendants of pre-Columbian inhabitants, as well as with the local Education Board of the district of Lamas (Sp. acronym UGEL). SCBR was founded in 2009 by the anthropologist Frédérique Apffel-Marglin. SCBR shares a worldview in which the human, the non-human, as well as the community of spirits, are all kin to each other. By ‘biocultural regeneration’ we mean to honor this integration of all life as well as the cyclicity of its rhythms. It is also meant to obviate the backward/advanced implications of more linear formulations. SCBR is bringing together an expanding collective of scholars, activists, healers, artists, and shamans that cross the North-South divide.

Only Organics Can Feed the Hungry World: Here's Why Students working on UGA's organic demonstration farm in summer 2012. (Photo: UGA College of Ag)A new approach to agriculture that combines the best in industrial production with organic and sustainable practices is the key to meeting the changing needs of a changing world, where resources are rapidly depleted by a growing population. "Are Organic Foods Safer or Healthier Than Conventional Alternatives?" Justices, 9-0, Bar Patenting Human Genes The case concerned patents held by Myriad Genetics, a Utah company, on genes that correlate with an increased risk of hereditary breast and ovarian cancer. The patents were challenged by scientists and doctors who said their research and ability to help patients had been frustrated. After the ruling, at least three companies and two university labs said that they would begin offering genetic testing in the field of breast cancer. “Myriad did not create anything,” Justice Clarence Thomas wrote for the court. “To be sure, it found an important and useful gene, but separating that gene from its surrounding genetic material is not an act of invention.”

Farming and knowledge monocultures are misconceived Food needs can be met with a new vision for agriculture and science, say Brian Wynne and Georgina Catacora-Vargas. In mainstream policy and corporate thinking, scientific knowledge and global markets are considered key for food security. This has resulted in the industrialisation and laboratory research-led intensification of agricultural systems, inputs and food-supply chains. But intensified systems do not meet global food needs — they mostly suit export markets and corporate interests. The result is severe physical, but also economic, disconnection between production and consumption, or need, as well as private control of the crucial knowledge base that shapes agriculture. This is effectively an industrial monoculture model of production — of both food and knowledge — that avoids its ecological and social costs, while suppressing more effective sustainable alternatives, and underexploits science's potential versatility.

Are We Heading Toward Peak Fertilizer? You've heard of peak oil—the idea that the globe's easy-to-get-to petroleum reserves are largely cashed, and most of what's left is the hard stuff, buried in deep-sea deposits or tar sands. But what about peak phosphorus and potassium? These elements form two-thirds of the holy agricultural triumvirate of nitrogen, phosphorus, and potassium (also known as NPK, from their respective markers in the periodic table). These nutrients, which are essential for plants to grow, are extracted from soil every time we harvest crops, and have to be replaced if farmland is to remain productive. For most of agricultural history, successful farming has been about figuring out how to recycle these elements (although no one had identified them until the 19th century).

Organic farms produce same yields as conventional farms Organic farming produces the same yields of corn and soybeans as does conventional farming, but uses 30 percent less energy, less water and no pesticides, a review of a 22-year farming trial study concludes. David Pimentel, a Cornell University professor of ecology and agriculture, concludes, "Organic farming offers real advantages for such crops as corn and soybeans." Pimentel is the lead author of a study that is published in the July issue of Bioscience (Vol. 55:7) analyzing the environmental, energy and economic costs and benefits of growing soybeans and corn organically versus conventionally. The study is a review of the Rodale Institute Farming Systems Trial, the longest running comparison of organic vs. conventional farming in the United States. Inter-institutional collaboration included Rodale Institute agronomists Paul Hepperly and Rita Seidel, U.S.

Small Planet Institute Fed Up: The High Costs of Cheap Food In Fed Up, Dale Slongwhite collects the nearly inconceivable and chilling oral histories of African American farmworkers whose lives, and those of their families, were forever altered by one of the most disturbing pesticide exposure incidents in United States’ history. For decades, the farms around Lake Apopka, Florida’s third largest lake, were sprayed with chemicals ranging from the now-banned DDT to toxaphene. Among the most productive farmlands in America, the fields were repeatedly covered with organochlorine pesticides, also known as persistent organic pollutants. The once-clear waters of the lake turned pea green from decades of pesticide-related run-off. Research proved that birds, alligators, and fish were all harmed.